There’s a thought among football people (I’m not sure who those “people” are, but my understanding is that they exist) that teams are built from the line outward. This notion has probably become less important in a world where Marshall Newhouse starts for a championship-caliber team, but because I like to think there’s some point to me doing this every week, I believe that philosophy has some credence. And for those of us clinging to that method, the best place to point is San Francisco.

Through seven weeks, the Niners’ offensive line has been the best in football, and it can easily be argued that of San Francisco’s five best offensive players, four of them are linemen. The connection between the team’s success and the importance of investing resources into that unit seems evident: Football’s best offensive line is the one that includes three first-round picks. The only thing wrong with that line of thinking is that what’s set the Niners apart in their 5-2 start hasn’t been the play of its big-money trio, but of the other two men up front.

Much of the credit for the San Francisco ground game goes to its interior, but while left guard and first-rounder Mike Iupati’s dominance might’ve been expected, the performances of center Jonathan Goodwin and right guard Alex Boone were not. Each have been among the best players in the league at his position, and the success for Boone — an undrafted free agent and former practice squad player — has been especially surprising. Each of the three has done an excellent job on the move and holding up at the point attack, and it was the ability to do both that allowed the Niners’ running game to continue rolling along against the previously stingy Seahawks’ front seven. 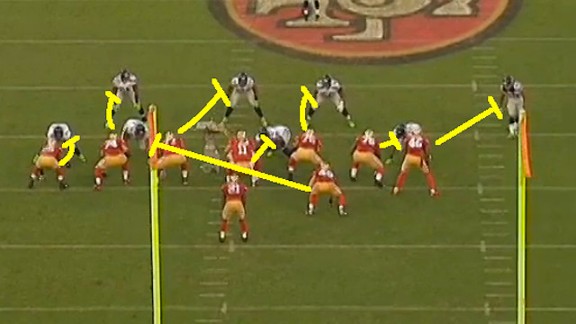 With first-and-10 from its own 32, San Francisco lines up in what amounts to a two–tight end, offset-I set. The Seahawks have eight men in the box, with free safety Earl Thomas to the right of the Niners’ formation. What follows is a perfect combination of San Francisco’s strengths and Seattle’s weaknesses in the run game.

The nose guard, Brandon Mebane, has been a key part of the Seahawks’ success against the run, and here we see the confidence the Niners have in Goodwin. His assignment looks to be allowing Mebane to go whichever direction the defender wants and making it Frank Gore’s choice to play off it. Still, Goodwin is left one-on-one with one of the league’s better run defenders. 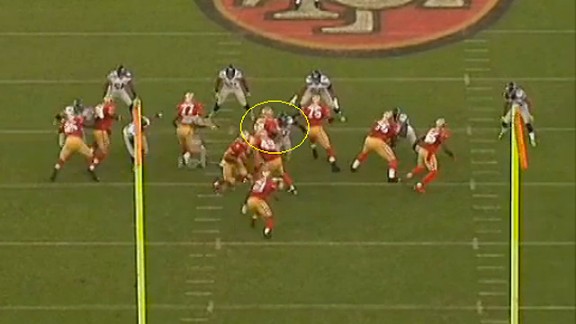 Goodwin seals Mebane to the right without any help, and this allows the San Francisco guards to exhibit one of their premier skills. Both Iupati (77) and Boone (75) have been excellent at getting to the second level all season, and because neither has to help on Mebane, each freely releases up to a linebacker. By running straight at the defense, the speed of Seattle’s linebackers is negated. Rather than putting the 49ers linemen at a disadvantage by forcing them to account for linebackers moving laterally, the Seahawks are forced to play straight downhill. This is how teams have found success against the Chicago Bears in the run game for years. The play also allows for Joe Staley to release inside toward the backside linebacker while the fullback kicks out the unblocked 3-technique. 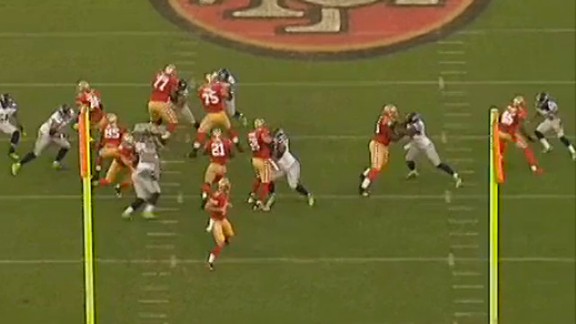 Both Iupati and Boone get up onto a linebacker, and with Goodwin sealing off Mebane, Gore is free to cut back to the right for the gain of 18. The play is a perfect example of the Niners’ coaching staff putting players in positions to succeed, and the variety of the players’ skill sets allowing for more of those positions to exist.

With seven sacks in the Bengals’ first seven games, Atkins should be heading to his second straight Pro Bowl at season’s end. Aside from J.J. Watt, Atkins has been the premier inside pass rusher in the league, and plenty of his plays show off a variety of moves that get him to the quarterback. This is not one of those plays. With 9:35 left in the third quarter against the Steelers, Atkins came off the line, drove 315-pound Willie Colon five yards into the backfield, tossed him to the ground, and dragged down Ben Roethlisberger.

There’s a bit of nuance here — halfway through the move, you see Atkins force Colon’s hand into the air to reestablish inside hand position — but really, this is just brute force at its best. Cris Collinsworth’s reaction during the NBC broadcast was everything that needed to be said. Watching Atkins slam Colon to the ground, Collinsworth reacts like he’s watching Saw — “Oh my god” in a tone that’s a haunting mix of horror and intrigue. Some things you can’t unsee.

This award could just as easily be an award for Marshall Newhouse’s continued ineptitude, but I’ll lean toward Quinn’s emergence as the explanation for his big game on Sunday. It didn’t take long for the former first-round pick to make his presence felt against the Packers. 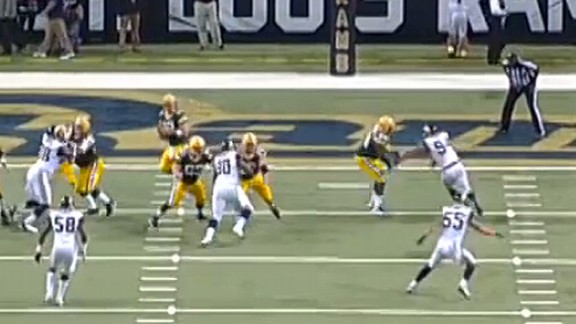 Early in the first quarter, the Packers lined up with second down near their own goal line. Quinn gets what’s becoming a trademark fast start off the line, and his maturation and natural gifts as a pass rusher are evident right away. With his left hand, Quinn makes contact with Newhouse before the left tackle can get his hands up. This is partially technique, but the length of Quinn’s arms has nothing to do with fundamentals. Phone-booth, one-on-one pass rushing is like boxing in the sense that being able to make contact while keeping the opponent at a distance is crucial. 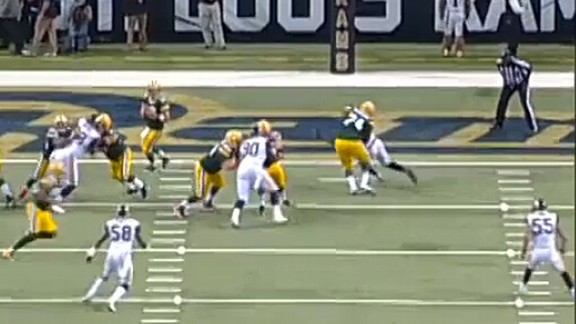 Quinn follows up the hand play by preventing Newhouse from getting a large area to get his own hands on. In this shot, it’s difficult to see Quinn, and that’s the point. His pad level is low enough to cause problems for the 6-foot-4 Newhouse. 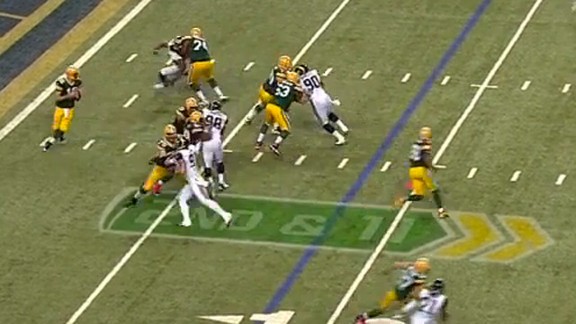 It’s finished off with an excellent bend back to the quarterback from Quinn. This shot shows just how dramatically he’s dipping his inside shoulder to shorten his path to Aaron Rodgers, and it’s the end of a move that’s sudden, fluid, and natural.