Yesterday, Sports Illustrated’s Grant Wahl reported that the 2022 World Cup being moved to November and December is a done deal. So, right smack-dab in the middle of the club soccer calendar! The logistics of the tournament, though, aren’t quite as tough to picture as they might initially seem: It’ll be a giant pain to implement, sure, but leagues will probably start earlier that year, take something like six weeks off, and then end a little later, say, in May. What is hard to picture is anyone still claiming that the bidding process was aboveboard. But FIFA now has seven whole years to do just that, so here’s a six-step guide to all the things you have to believe if you really want to buy FIFA’s company line.

Believe that FIFA just randomly decided to award the 2018 and 2022 World Cups at the same time even though it traditionally hadn’t done so in the past. Because, hey, when you’re awarding multibillion-dollar events to countries that rarely ever see any actual benefits from hosting, why not change up the procedures on a whim?

Believe that Russia and Qatar won hosting rights solely on the merits of their bids … despite both being rated as higher risks than Australia, England, the U.S., and many other countries. Specifically, you also have to believe that Qatar didn’t grease the wheels of FIFA’s decision-making mechanism in any way despite the involvement of Mohamed bin Hammam, who, because of bribery in the run-up to his 2011 challenge of Sepp Blatter for the FIFA presidency, was eventually banned, unbanned, and then re-banned for unrelated reasons by the FIFA ethics committee. And while it’s true that the hammer was dropped on bin Hammam because of the FIFA elections and not the World Cup, let’s just say there’s enough smoke around the Qatar bid to make you wonder if you, Jack, Kate, and Sawyer are being stalked by a monster on a tropical island filled with polar bears.

Believe the FIFA report commissioned to investigate all of that alleged World Cup corruption. The one that exonerated, well, pretty much everyone on this planet and is still yet to be made public.1

FIFA claim it’ll eventually release the report at some vague point in the future.

Good thing the investigator who compiled the report, Michael Garcia, never resigned over the way it was handled. Thankfully, the Russian delegation never claimed that the computers they used in the bidding process were destroyed, leaving them unable to cooperate with the investigation. Nor did any of the whistle-blowers cited in the report then accuse FIFA of violating their guaranteed anonymity.

Oh wait, no, I have that backward. All of those things did happen. 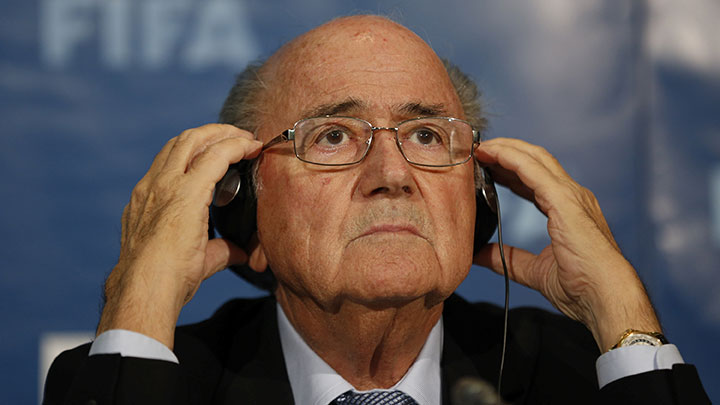 Believe that seasons are confusing, man.

In order for Qatar to bid on the World Cup, it had to bid on it as a summer tournament because, obviously, that’s when the modern World Cup is held. So the bidding process was built around Qatar’s claim that it could hold a World Cup in the summer and that doing so would be, in fact, a good idea. It’s not a good idea.2 Eventually, FIFA realized this and arrived at the November/December alternative. That’s fine — if you don’t mind that it interrupts the seasons of all of Europe’s major soccer leagues and just generally throws world soccer’s set schedule completely awry.

Temperatures in Qatar can easily reach 110 degrees Fahrenheit during June and July!

So either FIFA awarded Qatar the World Cup, knowing it would eventually move the tournament to the winter despite, you know, never mentioning this in the lead-up to bidding for a summer tournament, or, at some point between 2010 and yesterday, FIFA’s executive committee took an introductory class at a local Swiss university called “Summer: It’s the Hot Season.”

Believe that FIFA either didn’t know or didn’t care about Qatar’s human rights record, which Human Rights Watch calls “problematic.” This includes horrific conditions for the migrant workers who are building the beautiful stadiums Qatar promised. I forgot my flippant jokes for this step.

The news of the decision to move the 2022 World Cup was announced days after FIFA extended Fox’s deal to televise the 2018 and 2022 World Cups through 2026. With the summer World Cup, Fox would only have to pit the event against midseason baseball, and the network would be able to feature the tournament heavily. Now, Fox is stuck with a property that will be competing with the behemoth of the NFL for airtime and attention. Rather than having popular programming to fill the intervening months before the football season, Fox will have to balance the two at the same time.

Coincidentally,3 FIFA decided not to open the 2026 World Cup up to bidding, instead opting simply to extend Fox’s rights. It’s an especially curious decision given the widespread speculation that the U.S. could reasonably expect to host the Cup that year, making it an especially lucrative contract for FIFA to sell. Instead, FIFA did it in private and slipped out an announcement right before making the 2022 World Cup’s move official.