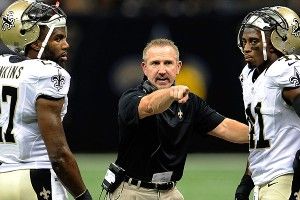 What’s happened to the New Orleans Saints? Unquestionably the most disappointing team in football through four games, last year’s 13-3 NFC South champions have become just the second 13-3 team in league history to start the year at 0-4, joining the 2009 Titans. Being compared to a Vince Young/Jeff Fisher soap opera isn’t very flattering, but after an offseason of bounty discussion and penalties, it’s probably fair company.

The prevailing justification for New Orleans’s struggles has been the absence of Sean Payton as head coach and offensive play caller, which very well might be true, but there’s a lot of relevant questions about this team that go beyond such a simple explanation. How has Payton’s absence manifested itself? Is there any evidence that this is a coaching issue and not a player performance issue? And is it something that’s going to be fixed when Payton comes back after this season, or with the return of Joe Vitt in a couple of weeks?

While the offense has certainly slipped from its previously lofty heights this year, it’s still 10th in points scored and 11th in DVOA; by comparison, the defense has allowed the fourth-most points in football and is the fifth-worst defense by DVOA (they’re 29th in DVOA against the pass and 28th against the run). The offense has always been better than the defense in New Orleans, but the defense has rarely been quite this bad. It’s a unit that doesn’t do anything well.

The scary thing for the Saints is that their defense requires a major overhaul, one that’s been overdue for a while. When New Orleans won the Super Bowl in 2009, it came as part of a season in which the Saints invested in veteran defenders in free agency and surrounded them with talented young players like cornerback Tracy Porter. They got career years from safety Darren Sharper (nine interceptions) and cornerback Jabari Greer (who had one of the great uncelebrated seasons of all time as a shutdown corner for 16 games), but the building blocks of that defense are gone. Sharper only started one professional game after the Super Bowl and retired. Porter got hurt, lost effectiveness, and is currently getting torched in Denver. Greer, as it turns out, wasn’t actually a shutdown cornerback after all. Six of the 11 starters on that defense are no longer regulars in the New Orleans scheme, including most of the secondary, and defensive coordinator Gregg Williams is obviously no longer allowed to coach anywhere in the league, let alone in New Orleans. That defense was a one-off, and over the rest of Payton’s tenure with the team, it’s struggled to keep points off the board.

There’s no obvious statistical smoking gun that the Saints can try to focus on to correct their poor performance. The closest thing would be their performance on third down, where the Saints’ defense had an average of 8.3 yards to work with for a conversion, which they allowed 34.6 percent of the time. This year, they’re allowing a 38.8 percent conversion rate while having to defend 6.9 yards per conversion attempt. Honestly, that’s not enough of a noticeable difference to really suggest that there’s something fundamentally wrong or unlucky about their performance.

One way the Saints could help is by planting seeds in the corner of an end zone for a pass rush and hoping that it delivers before the end of the season. Last year, New Orleans’s leading sacker was safety Roman Harper, at 7.5 sacks; that fact screams that the Saints got pressure with their scheme as opposed to the play of their linemen up front. Harper and company had the league’s fourth-worst sack rate a year ago at 5.0 percent; this year, they’re down to 4.4 percent, but that’s only good for 24th in the league. They’ve been committed to personnel that hasn’t really gotten the work done; Will Smith has averaged just eight sacks per year as the team’s star pass rusher, and 2011 first-rounder Cameron Jordan has just two sacks in 20 professional games. Steve Spagnuolo was brought in to create pressure with his blitz packages, but the new Saints defensive coordinator just hasn’t gotten very much out of his charges yet.

Jordan’s fellow first-round pick in 2011 is a representation of what’s gone wrong with the Saints and their offense. Mark Ingram may have a Heisman trophy in his cabinet, but judging him on how he’s run at the professional level, that Heisman might be sticking out of his back like a giant fork. In each of his two professional seasons, Ingram has been significantly outperformed by the team’s other halfbacks. Last year, Ingram averaged 3.9 yards per carry while his brethren — the likes of Pierre Thomas, Chris Ivory, and Darren Sproles — averaged a whopping 5.6 rushing average. This year, the gap is even worse; Ingram’s averaging 2.8 yards per attempt while everyone else is at 5.9 yards per carry.

The Ingram trade represents the worst of the Saints, who didn’t learn their lesson with running backs. After struggling to get anything consistent out of Reggie Bush and letting him go (and promptly seeing him play way better in Miami), they decided on draft day last year that they wanted a running back and dealt the 56th overall pick and a future first-rounder to the Patriots for the 28th pick. (Again, the Patriots are good at this value stuff.) Ingram’s shown virtually no signs that he’s an impact back at this level, and while you don’t want to give up on a player after a year and a half, the Saints are better off without him in the lineup.

That performance on the ground is the biggest problem with the New Orleans offense and the work done by new offensive coordinator Pete Carmichael. Last year, while the Saints were running rampant on the league, they threw the ball 59.1 percent of the time on first downs while games were within two scores. With that run/pass mix, they averaged 6.6 yards per attempt and picked up five or more yards a full 50 percent of the time. This year, despite the fact that they’ve been behind for most of the year, they’ve committed to the run on first down. New Orleans has run the ball a full 50.5 percent of the time on first down, and as you might suspect, their yards per attempt (5.46) and five or more yard success rate (37.4 percent) is way down. New Orleans’s third-down conversion rate on offense has simultaneously dipped in these games from 57.4 percent all the way down to 43.2 percent, a move likely related to the first-down struggles.

Saints fans should at least be a little hopeful for the rest of the season. For one, the Saints haven’t lost a blowout this year, having succumbed in each of their losses by no more than eight points. Some of that represents late scoring by the Saints that made the margin of defeat look better than the actual performance, but the Saints have only been outscored by 20 points. When I went back and looked at teams since 1990 who had been outscored by a total rate of 15-25 points over their first four games, the average team had won 1.3 games. Their Pythagorean expectation is for 1.6 wins. As the season goes along, the Saints will pull a few close wins out. This team isn’t going to be the worst squad in football.

However, the Saints do have some reason to be concerned about their future. Their secondary is young, but the lack of a reliable pass rusher and the continued absence of Payton makes it difficult to really focus on much else. Even when Mickey Loomis and Sean Payton make their way back into the organization, they’ll need to be aggressive this offseason about solving their real problems on both sides of the ball. While Saints fans might be tempted to anticipate the return of their prodigal sons and pencil the team in for another 13-3 season next year, and Saints detractors might see the 0-4 start as a sign that the Saints are done, the truth is that they’re more like an 8-8 team than anything else.