It’s been an uneven beginning of the season for Europe’s elite underdogs. You know, the teams that are good enough to qualify for the Champions League and occasionally win a trophy, but not wealthy enough to spend or consistently compete with the Real Madrids and Bayern Munichs of the world. In other words: Europe’s hipster darlings. Just over a quarter of the way into the season, a quick look across the continent reveals the small margins and high variance that come with being not quite the best.

Atlético Madrid have followed up last year’s improbable La Liga championship and Champions League near-victory with a terrific start to the season. In what’s been a refreshingly competitive La Liga season, they sit tied in second with Valencia, just one point off Real Madrid. Bayern castoff Mario Mandzukic has slotted in near-flawlessly as a physical, attacking focal point, and while he may not offer the sheer tenacity and athletic ability of Diego Costa (and really, who does?), the Croatian gives Atlético a big, physical presence in the middle of the box. The lion’s share of his 24 shots have come from inside the penalty area, and three of his four goals have come from headers. 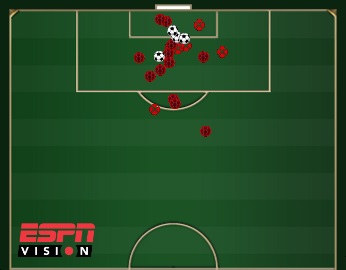 What’s most remarkable about Atlético, though, is how often and how consistently they score off set pieces. (What’s actually most remarkable is their mad-dog defending, but with Diego Simeone, an actual mad dog, leading the way, that’s long become a given.) Atlético already have 13 goals from set pieces — almost twice as many as Valencia, who are second in La Liga with seven. Simeone’s squad is converting on a whopping 27.7 percent of its set-piece shots, while Valencia are the only other team over 20 percent. That’s a marked improvement on last year’s already killer set pieces, from which they scored joint-league-best 18 set-piece goals on a league-best 14.5 shooting percentage. While there’s little reason to believe that Atlético won’t continue to be awesome at set pieces, it’s doubtful they’ll continue to be this awesome. Eventually, those goals are going to have to start coming from the run of play if Atlético want to contend through the remainder of the season. But at this point, despite losing Costa, Thibaut Courtois, and Filipe Luís to Chelsea, Atlético Madrid have barely missed a beat.

It’s getting harder and harder to ignore the decline of Serie A. Gone are the years of the Milan clubs winning Champions League trophies. Outside of Juventus and Roma, no one’s any good, and the bottom half of the league is downright dreadful compared with elsewhere in Europe. Considering the state of affairs, there’s more expected of Rafa Benítez and the Napoli team he built by selling Edinson Cavani to PSG than fifth place. Add that they didn’t even make it to the group stages of the Champions League, and things could be a lot better in Naples.

The team showed its potential this past Saturday, though, beating Roma 2-0 behind goals from ex–Real Madrid attackers Gonzalo Higuaín and José Callejón. Higuaín is doing what he’s always excelled at, getting into phenomenal goal-scoring positions before shooting. He has five goals, but he leads Serie A in expected goals with 7.1 (stats courtesy of ESPN Stats & Info). That’s despite taking only 27 shots, which puts him outside the top 10 in the league. Callejón, on the other hand, is putting the ball in the net from all over. He leads the league with eight goals, and he’s fourth in shots — but since he’s taking more difficult shots on average, his expected goal tally is only 4.69. That hasn’t kept him from picking out corners, though.

It’s been a disappointing season for Napoli, but they’ve got a good collection of talent, and they remain in the thick of the race for Italy’s third Champions League place. They better win that race, though, or the Benítez era will likely be over only two seasons after it started.

If you’ve only watched Dortmund play in the Champions League this season, what follows will be confusing. In Europe, Jürgen Klopp & Co. have been perfect, winning three of three. Except, that’s more wins and more points than they have in the Bundesliga, where they sit in the relegation zone after 10 games. That’s right: Borussia Dortmund, who were in the Champions League final a little more than a year ago, have a total of two wins and seven points.

Domestically, nothing’s come up Dortmund this season. Losing Robert Lewandowski and Mario Götze in the space of two seasons to your biggest rival would cripple most clubs, but combine that with a never-ending injury list — which, at various points, has included Marco Reus, Mats Hummels, Ilkay Gundogan, Nuri Sahin, Marcel Schmelzer, and Jakub Blaszczykowski — and, well, you get one of the best teams in Europe fending off relegation.

Obviously, Dortmund won’t stay in the doldrums forever. Even at 17th out of 18 teams, they are only 10 points off a Champions League position. And don’t worry, even if they don’t have the results, they still have the swagger. Before going on the road to Bayern Munich last Saturday, Hummels told the world how his team was looking forward to the challenge to get them back on track. Then, in the opening 10 minutes, they did this.

In happier times, that might have been enough. But these are not happier times for Dortmund. Hummels came off with an injury at halftime and will now miss two to three weeks. Then, with 20 minutes left, Lewandowski scored against his old team to tie the game, before Bayern took the lead when Arjen Robben converted a penalty with only five minutes remaining.

It’s a never-ending challenge, competing with the biggest teams in the world while on a more reasonable budget. Every year, these clubs have to replace the talent they lose and still maintain enough depth to compete on multiple fronts — all while continuing to find those small edges that bigger teams might overlook. Right now, Atlético are making it look easy and Dortmund are making it look impossible, but it’s Napoli whose experience is most representative. Being an upper-middle-class team is an exercise in being just close enough to say you’re in the race but never beyond shouting distance of failure.