This is about celebrating NFL touchdown celebrations because the NFL does not celebrate touchdown celebrations enough. They practically don’t allow them anymore. This is not a difficult thing to understand, so I will do my best in the coming moments not to make it so. In fact, I will do the least difficult thing I can think of, which is to answer fake questions that I’m asking myself.

It charts 28 NFL touchdown celebrations, placing them in quadrants based on their individual qualities — specifically: coolness, silliness, corniness, and transcendence.

So are these the 28 best NFL touchdown celebrations of all time?

Not exactly, no. But kind of, yeah. You know how that goes.

That’s fine. Just post it on Twitter or Facebook or Instagram, say you don’t agree with the placements at all, claim a celebration’s lack of inclusion here negates the entire thing (perhaps LaDainian Tomlinson’s Ball Flick, or maybe that time David Nelson hugged his girlfriend, who happened to be a cheerleader for the opposing team, or maybe when Stevie Johnson mocked Plaxico Burress), then move along about your day.

But which celebrations qualified for inclusion on the matrix?

Touchdown celebrations that occurred in NFL games, be they preseason, regular season, or postseason, were all considered. More credit was given to celebrations that made opponents angry, because if your celebration doesn’t make somebody mad, then why are you even doing it?

Did you see that one celebration Dave Stala did where he juggled the ball with his feet like a soccer player before punting it into the stands? It wasn’t during a NFL game, but it was AMAZING. Why didn’t you put it on there?

Because the CFL is not the NFL.

Those represent celebrations that belong on the matrix but weren’t able to fit. It’s important that these things are substantive, but it’s also important that they look dope. So we added the EXTRAS section at the bottom. Just pretend like they’re there.

WHERE IS THE LAMBEAU LEAP?

The Lambeau Leap is the single most overrated non-spectacle in all of sport. It is completely toothless. The Lambeau Leap is like the NFL touchdown celebration version of opting to have your receipt emailed to you instead of printing it out.

If the Lambeau Leap had been something like the Lambeau Ax-Kick, or the Lambeau Split, then maybe it’d have made it on here. As it is, it’s a no-go. 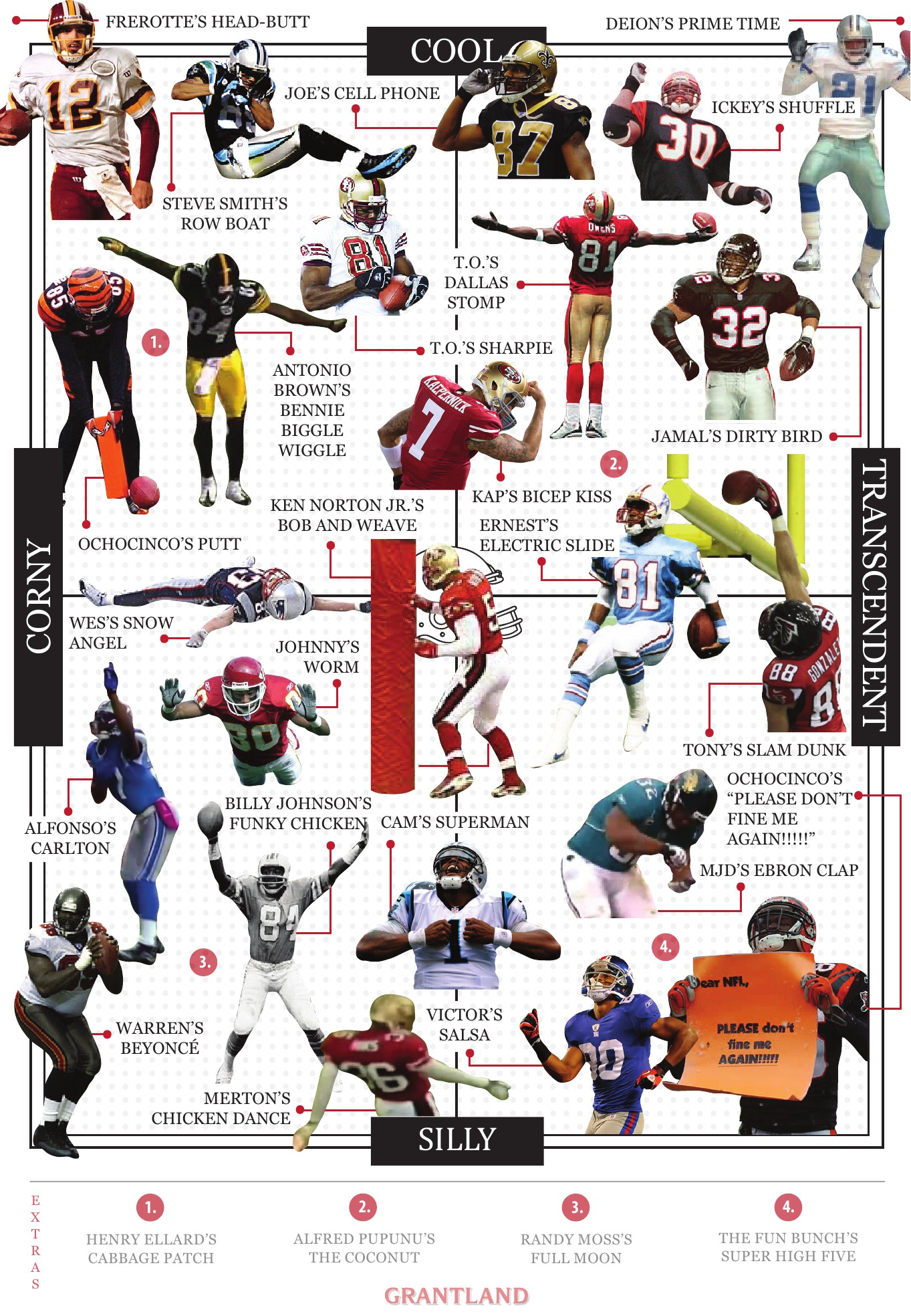 Click to see an expanded version of the matrix.

Frerotte ran in a touchdown, spiked the ball against the wall, and then head-butted the wall and gave himself a concussion. It’d seem super-duper dumb, but it scores so high because it started out very cool. Head-butting things is very dope. It’s a top-three fight move, easy. It’s a top-three life move, really. Imagine how much simpler things would be if you just walked around head-butting shit. Like, when they get your order wrong at Taco Bell1 or if your baby won’t stop crying? Oh, man. That’s the world I want to live in.

Actually, head-butt yourself for eating at Taco Bell.

Watching Steve Smith making fun of the Vikings’ sex boat scandal by scoring a touchdown and then pretending to be in a rowboat was basically the entire reason I was born with eyes. Bonus points for Smith’s postgame trash talk on Fred Smoot: “I destroyed his career.”

JOE HORN HID A CELL PHONE UNDER A GOALPOST CUSHION BEFORE THE GAME BECAUSE HE KNEW HE WAS GOING TO SCORE A TOUCHDOWN.

JOE HORN SCORED ONLY 10 TOUCHDOWNS THAT ENTIRE SEASON, BUT HE SCORED FOUR THAT GAME.

JOE HORN WAS FINED $30,000 BY THE NFL FOR HIS CELL PHONE CELEBRATION.

JOE HORN WAS BASICALLY FINED $30,000 FOR PREDICTING THE FUTURE.

The only time Emmitt Smith has ever been cool in his whole life was when he responded to T.O.’s Dallas Star Stomp by scoring his own touchdown and then doing his own Dallas stomp.2

T.O. scored another touchdown and did it again, igniting a fight. A fight breaking out is the easiest way to tell that an amazing touchdown celebration has just taken place.

T.O. is the second-greatest touchdown celebrator of all time. T.O.’s Touchdown Celebrations, ranked:

I do the Dirty Bird every time somebody tells me he or she is from Atlanta. That’s a little thing called making new friends.

Actually from a rap song from several years ago:

I can think of about 15,000 cooler rap dances to lift for touchdown celebrations (the Nae Nae, the Kid ’n Play, P Poppin’ on a Handstand or some variation of it3) and some have certainly been done (the cabbage patch, the squirrel dance, the robot, the worm, etc.), but this was a nice little rap-nerd moment.

The best thing to think about is Tom Brady throwing a touchdown and then dropping down into the splits and gyrating like he’s the star of an Uncle Luke video.

This one was actually waaaaay cooler and waaaaay doper, but then Colin Kaepernick defanged the move last year in the playoffs on the way to ousting the Panthers:

This was like the part in Stomp the Yard when the guy goes around mimicking all the different dance styles. I don’t understand how anyone can not like Kaepernick, Newton’s family notwithstanding.

People really dislike this one, but, I mean, the bicep is the least incendiary body part to kiss during a celebration.

Wes Welker has been White America’s go-to receiver for the last seven years. What an MVP.

He did it in Cleveland.

It was completely uncalled for.

The crowd lost its mind. 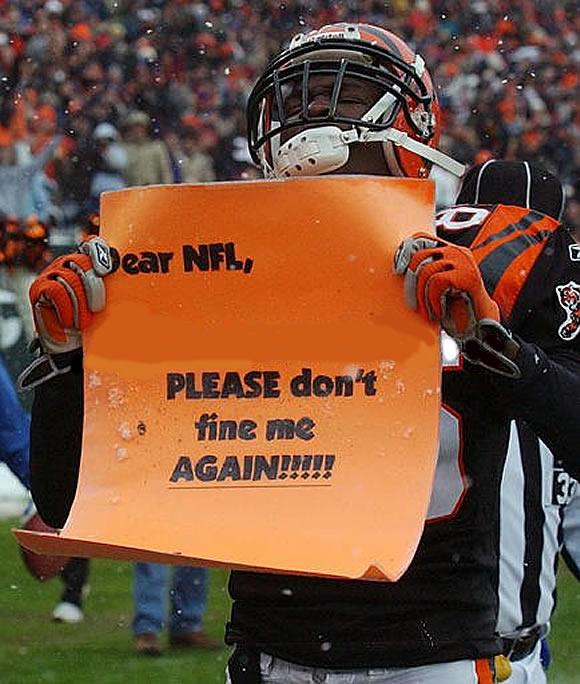 I’m just going to pretend like Victor Cruz is Mexican until we get an actual Mexican in the NFL.