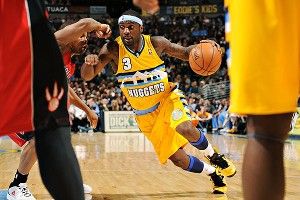 For the most part, NBA head coaches tend to like predictability. Given the complexity of their schemes, there’s a certain comfort in knowing where players are going, and when they’re going to be there. With coaches working hard to control every aspect of the game, it’s remarkable to see the success George Karl has had by giving up that control.

Over the years, Karl’s offenses have largely been defined by, well … lacking definition. The past two seasons in Denver are no exception. Karl’s three-out-two-in, dribble-drive motion offense provides his team with a template to play an exciting brand of basketball that every NBA player would love to be a part of. There are only a few guiding principles — namely moving the ball, playing fast, and attacking the rim for layups or fouls — and that lack of structure creates a system that grants his players almost total autonomy.

That latitude also leads to a rather unpredictable attack. Dribble drives, ball screens, and post-ups can occur almost anywhere on the floor at any time. Ideally, no two Denver possessions will ever be alike. This leaves opposing coaches little to work with as they try to make sense of the pattern-free havoc on that end of the floor.

But Karl’s anarchistic philosophy doesn’t come without a price. For every player like Andre Miller, who thrives in the freedom inherent to this system, there are an equal number who struggle adapting to it. Regardless of basketball IQ, certain players excel within a structure. Andre Iguodala and Danilo Gallinari are two such players. Iguodala’s turnover rate has skyrocketed since moving from Doug Collins’s extremely rigid offensive system in Philadelphia, and Gallinari has seen his shooting percentages plummet.

Watching Iguodala, it’s noticeable that the concept of trying to break someone down off the bounce with 17 seconds left on the shot clock as his teammates look on is rather foreign to him. Gallinari has something of the opposite problem, often needing saving from himself. The Italian forward routinely attacks perimeter defenders equipped with superior athleticism, only to end up forcing contested jumpers when unable to get where he wants to on the floor.

The inability for Karl’s aptly termed “controlled chaos” to serve specific individuals is a problem, but the bigger issue is how the system has made it difficult to articulate what exactly the Nuggets are. Some nights Ty Lawson runs amok in the pick-and-roll. Others, it’s Gallinari scoring in bunches from isolation attacks. And of course, Miller still heavily influences the team’s offense whenever he’s on the floor. The very randomness that Karl wants from his offense is what causes its muddled self-image.

A look across the league shows that every other true contender has an established hierarchy. For the Heat, everything revolves around LeBron James in space. The interior duo of Marc Gasol and Zach Randolph pound the paint and run high-low action to perfection in Memphis. The Clippers, meanwhile, feed off Chris Paul’s mastery in the pick-and-roll. Even the Jazz, a team without a superstar, adhere to a post-centric offense that allows the team to play inside-out off big men Al Jefferson, Paul Millsap, and Enes Kanter. That clearly defined approach has allowed Utah to match Denver’s 14-12 record despite starting the season with considerably lower expectations.

Whether it be working off screens, posting up, or running pick-and-rolls, Denver, like the Jazz, doesn’t need a superstar-caliber player like James or Paul to be a focal point. They simply need a member of their current roster capable of manipulating defenses on a consistent basis. The 2004 Pistons were a “starless” team that thrived primarily because they knew the ball was going to be in Chauncey Billups’s hands when it mattered most. Sure, that Detroit team had Rip Hamilton darting around screens and Rasheed Wallace scoring inside and out, but there was no question that Billups controlled that offense.

The Nuggets player most capable of assuming a Billups-like role is Lawson. Though he’s been under-performing to start this season, Lawson’s PER of 19.43 last year was in fact higher than Billups’s mark of 18.66 when the Pistons won the title in ’04. But for the diminutive Nuggets point guard to have an impact like the Billups of yore, Karl must actively emphasize Lawson’s place as the leading man.

Denver would be served by using a pick-and-roll-heavy attack with Lawson as an alternative to the “your-turn, my-turn” approach that defines its offense. Karl must also revisit his decision to frequently pair Miller and Lawson together in the same backcourt, a situation that often sees deference to the veteran guard, even though it’s to his team’s detriment. Unlike Jason Kidd in New York, Miller is far too interested in calling his own number rather than facilitating the offensive flow and making open 3s.

While he’s revisiting his use of personnel, Karl should look to be more consistent with his use of Gallinari. The versatile forward moves back and forth between the 3 and 4 positions, with Karl using him as the glue to tie together his “hot hand” lineups on a game-to-game basis. Committing to Gallinari for longer periods as a “stretch” 4 who can attack bigger defenders off kick-outs from penetrating guards would likely alleviate some of his problems with shot selection.

Iguodala could also stand for being put in more situations in which he can attack rather than being forced to break down set defenses on his own. Incorporating some basic pin-down sets that he ran with aplomb under Collins in Philly would allow Iguodala to curl off screens en route to the rim or use his underrated passing to find open screeners rolling to the hoop.

Karl’s team can only survive off confusion for so long before it eventually becomes their sole identity. At some point, chaos must give way to structure. To give Denver a chance to be great, Karl, the basketball anarchist, must find comfort in predictability.