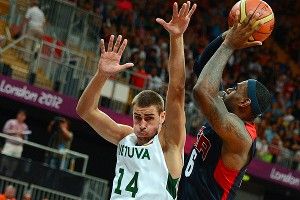 Since the Toronto Raptors drafted Jonas Valanciunas fifth overall in 2011, the curiosity about the 20-year-old Lithuanian has only grown among basketball fans. With the news that he would make his NBA debut this season, the interest in his performance for the Lithuanian Olympic team was heightened even further. Coming into the Games, Valanciunas had already built a solid track record in international competition, dominating the 2011 U19 World Championships and putting together a solid campaign at last year’s EuroBasket. Those performances are what make Valunciunas’s struggles during these Olympics a disappointment. Averaging barely 10 minutes, 3.6 points, and three rebounds per game, he’s failed to make much of an imprint on the tournament. Taking everything into account — the previous international success, the tape of his domestic season last year for Lietuvos Rytas, and his Olympic struggles — I still think Valanciunas can have a positive impact when he joins the Raptors, but his time in London has shown that he has a few areas of weakness he’ll need to work on during his rookie season.

On the offensive end, Valanciunas’s biggest strength is his ability to play in the pick-and-roll — a skill that fits well with new Raptors point guard Kyle Lowry, who finished in the top 10 percent among all NBA players in pick-and-roll points per possession. This past season, Valanciunas scored 73 points on 56 rolls to the rim for an average of 1.304 points per possession on 77.1 percent shooting.

Part of this success comes from how hard Valanciunas rolls off nearly every screen he sets. He only popped out after setting a screen six times all of this past season, and the hard dives he makes to the rim create opportunities both for him and his teammates. Combining that mind-set with excellent fundamentals (keeping the ball high after the catch and getting the ball on the rim quickly) makes him a player who can have a lot of success with pick-and-roll play in the NBA.

One of the biggest worries about Valanciunas when he was drafted was his inability to defend a player on the block one-on-one. A lot of his struggles came from larger players being able to establish position against Valanciunas’s more slender, 19-year-old body. During the past year, Valanciunas has gained some bulk, and although his post defense is still a weakness, it’s showing signs of improvement. Two years ago, Valanciunas gave up 49 points on 47.1 percent shooting in 51 post-up possessions. This past season, those numbers dropped to 47 points on 33.3 percent shooting in 74 possessions.

Along with an increase in size, experience has helped as well. Valanciunas cut down his foul percentage by more than half in the past season. Fouling on 10.8 percent of possessions is still high, but it’s clear that he’s now able to do a much better job of keeping his hands up and avoiding unnecessary contact. Pairing Valanciunas with Raptors coach Dwane Casey — a defensive-minded coach who helped develop Tyson Chandler — should only lead to more improvement.

Despite his team’s best efforts to turn him into a post player this past season — 33.5 percent of Valanciunas’s possessions were post touches — at this stage in his career, Valanciunas just isn’t the type of player who’s effective after getting the ball on the block. On his 113 post possessions, Valanciunas scored just 93 points on 39.7 percent shooting. His real struggles, though, are with turnovers. Valanciunas turned the basketball over 21.2 percent of the time he posted up — more than once every five possessions.

It’s obvious on tape that Valanciunas doesn’t look comfortable with the ball. He rushes through his moves and steps, and that almost always results in a bad shot or a turnover. Whether he’s rushing because he isn’t comfortable or because he’s not confident he can back his defender down, he needs to get more relaxed and start taking what the defense gives him. This is something that comes with experience, and with more time, this may improve the same way his defense did over the past year.

Despite his shortcomings, Valanciunas figures to have an early impact on the Raptors because he complements the pieces they have now (Andrea Bargnani is an effective pick-and-pop player compared to Valanciunas’s bruising pick-and-roll style), and he’s effective in areas where Toronto struggles (notably, help defense). His weaknesses will likely be minimized as the Raptors focus on what he does well, and that should make Toronto a place where Valanciunas can develop into the type of player he’s capable of being.