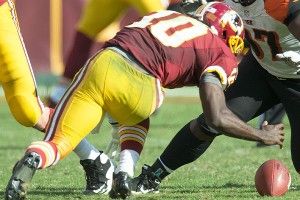 As I’ve mentioned in the past, research has shown that fumble recoveries, on the whole, tend to be mostly random acts. Chase Stuart has a great pair of pieces on the fumble recovery rates for specific types of fumbles here and here. In the comments for that piece, Danny Tuccito of Football Outsiders notes that the truly random fumbles are plays where a quarterback is sacked or loses the ball after running past the line of scrimmage; the defense is extremely likely to recover a fumble by a receiver or a running back, while the offense is more likely to recover all other types of fumbles. That doesn’t mean that a specific offense is more likely to recover certain fumble types than another offense, which is an important distinction.