One of the best moments of this year’s summer league came Sunday afternoon, when word began to spread that the Thunder were matching Portland’s offer sheet to Enes Kanter. He’ll make $70 million over four years to stay in Oklahoma City. The reactions around Vegas were split down the middle, but my favorite came after a few hours, when a friend blurted out, “I just don’t know how we got to a place in the NBA where giving $70 million to Enes Kanter could ever be considered a good idea.” Here we are!

Everyone around the NBA has a take on Kanter’s contract, and each side thinks the other is crazy. It’s a perfect storm to piss everyone off. This is a sign of the year to come for the Thunder, for whom every decision will be twice as dramatic in light of Kevin Durant’s free agency next summer.

For one thing, this contract makes it official: Thunder management was burned so badly by not wanting to pay the luxury tax to keep James Harden (four years, $60 million) that they were shamed into paying Kanter $70 million. OKC defenders will grab their pitchforks and start yelling about context if you bring this up, but don’t let them overthink this for you. Three years ago, OKC was facing the exact same dilemma with a much better player, and its choice informed what’s happening now. The Thunder owners wouldn’t go into the tax to keep Harden, and the hidden cost of those savings was the damage it did to their reputation. Now, with Durant watching, paying Kanter has the added benefit of helping them save face. In other words, one of the biggest mistakes in NBA history just turned into … another big mistake?

I won’t pretend I have no bias here. As a fan of a team with a vested interest in Thunder dysfunction, I watch every move that OKC makes. And these were my DMs to a fellow Wizards fan when news of the Portland offer sheet broke: 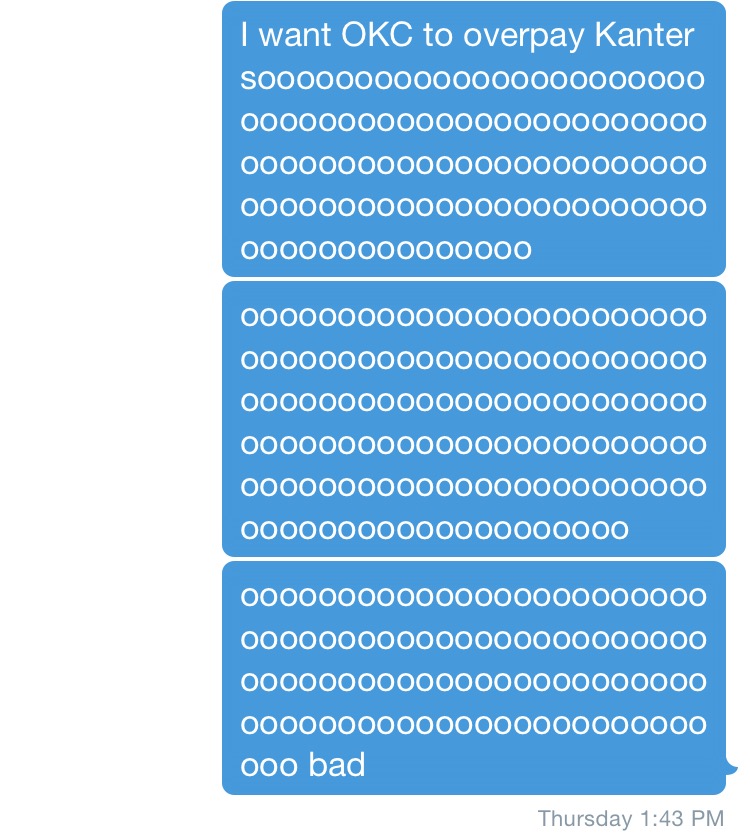 Ignore my bias for a moment and just hear me out.

Don’t start with the money. That’s where the talk about Kanter gets off track. Nearly $18 million a year for a career loser and an atrocious defender seems like too much money, but the contract itself is easy to defend once you look closer at where the league is going. We’ve spent all summer hearing every contract conversation start with, “Well, YOU KNOW, the cap is going up, so …”

At some point we should all accept that the numbers just won’t make sense for a little while. Reggie Jackson agreed to a deal worth $80 million over five years with the Pistons last week. Omer Asik is making nearly $60 million in New Orleans. The cap should rise so dramatically that most of these deals will look relatively decent in two years. This includes Kanter’s. The best way to judge these deals is whether you think the players themselves can actually help.

That’s the test Kanter fails. He’s one of the worst defenders in the entire league, he doesn’t pass well, and his only skills are scoring and rebounding from the low post. He helps in places where a healthy Thunder team doesn’t really need it, and hurts them everywhere else. He’s like Dion Waiters but worse, because you can look at the numbers and trick yourself into thinking he’s productive. To date, the most honest thing anyone has ever said about him came from Trevor Booker:

Trevor Booker on Enes Kanter: He did what he always does. He got his stats. He didn't defend. He took an L (a loss)

And that’s when the money comes back into play. It’d be one thing to have Kanter as a talented-but-flawed fourth big man, but even with the new cap, any team that pays a guy $70 million is going to have pressure to play him. Especially this team. The Thunder just entered luxury-tax territory for the first time in franchise history — they are currently looking at a bill of anywhere from $11.6 million to $24.1 million. Given the investment, you think management is going to watch Kanter play 10 minutes a game?

Thunder defenders will claim that general manager Sam Presti had no choice here. Damned if he did, damned if he didn’t, because the NBA world (and possibly Durant) would have called OKC cheap if it’d let Kanter walk, just like everyone’s calling it stupid for bringing him back. No matter what happened here, the Thunder were going to look bad. But there are two things we should mention in response.

First of all, the Thunder management has a reputation for being cheap because that’s how they’ve managed the team ever since landing in Oklahoma. Forget Harden. Remember last year’s first-round pick? Jeff Green’s heart condition? Refusing to use the amnesty provision on Kendrick Perkins for two full years? You can’t expect the world to be sympathetic about fighting a stereotype that’s been well-earned.

Second, and more importantly, if faced with the choice between being cheap or stupid, who would choose stupid? 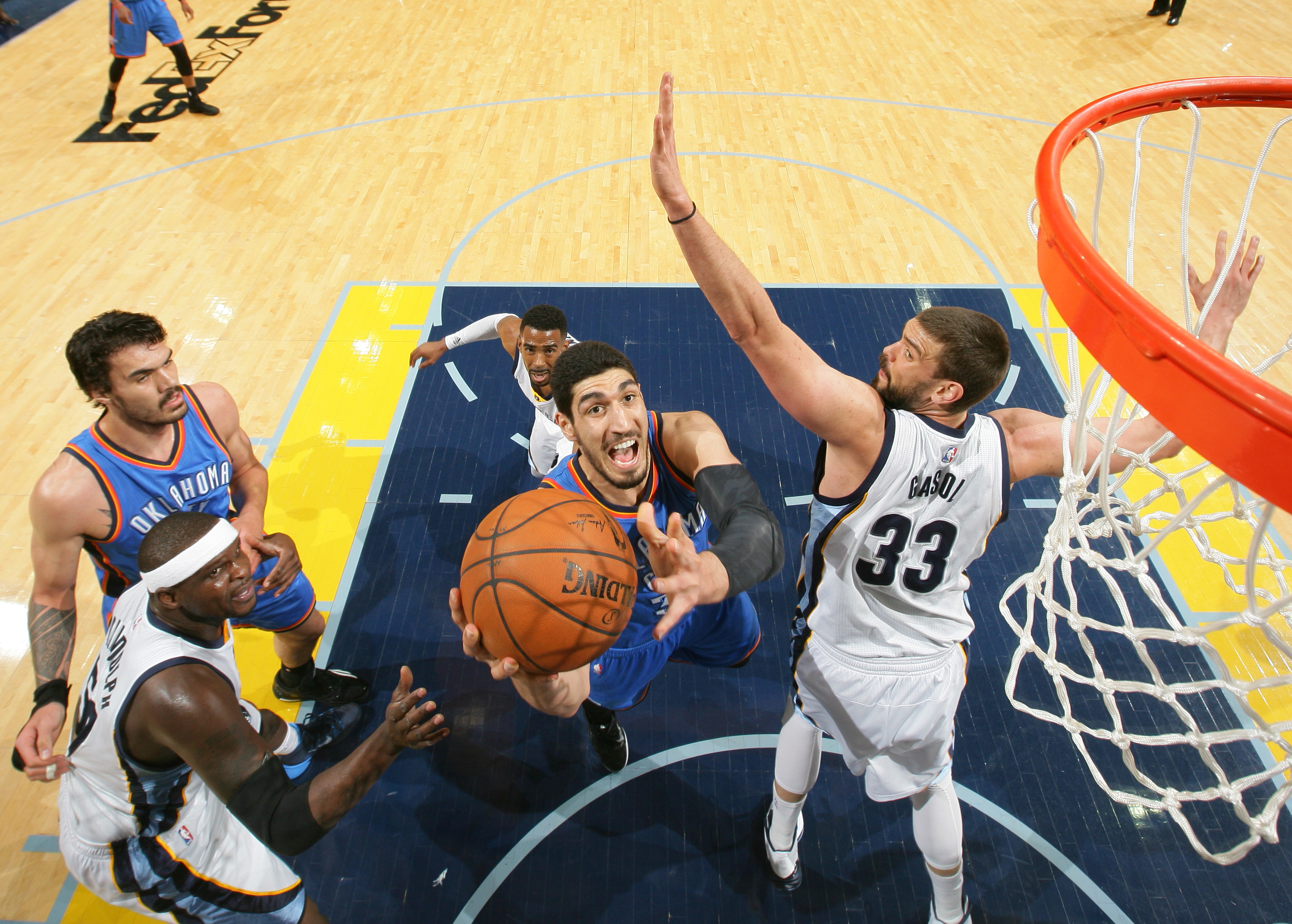 Imagine if the Warriors had looked at David Lee before last season and, instead of benching him, gave him $70 million, plus a 15 percent kicker if he ever gets traded. That’s how OKC has prepared for 2015-16.

The fit is so bad, it’s enough to make you wonder: What if this isn’t for 2015-16? While the whole world looks at this as the Thunder spending to keep Durant, it might have more to do with spending in case Durant and/or Russell Westbrook leave. Or maybe it has dual benefits. Convince KD you will spend money on one hand, and protect the future on the other. Kanter is only 23 years old, and whatever deficiencies he has, there’s enough talent to talk yourself into his potential down the line.

True, if building a contender around Kanter and Serge Ibaka is Plan B, you’re probably better off letting Kanter walk and going all in to win with Plan A. But if you’re desperate enough, it’s possible to convince yourself that this is a good idea.

That’s the only way matching Portland’s offer sheet makes sense. This is OKC choosing a long-term insurance policy, and betting that it won’t cost the team on the court in the meantime. It definitely sounds smart, and it even looks good for next season if you don’t think about it too hard.

Maybe it’ll work. Kanter could be less of a liability on defense playing next to a healthy Ibaka, he could share the ball with Westbrook and Durant, and his low-post scoring could make a healthy Thunder offense that much more impossible to defend. Maybe all this will secure a dynasty for the future.

I don’t see it. My insane and deeply unhealthy biases aside, OKC has a better chance than anyone else at signing Durant. Given how high the stakes are this year, it’s not worth it to gamble on someone else at the same time.

The best way to make Durant forget about losing Harden isn’t spending, it’s winning, and Kanter will probably hurt the cause more than he helps. If that’s how this current OKC run ends, it would be tragically perfect. The same way an addiction to Kendrick Perkins kept OKC from playing its best lineups against the Heat in 2012, Kanter could handicap OKC as the bookend to the Thunder’s never-quite-a-dynasty era. The wrong decision with this restricted free agency could hurt them just as much as the wrong decision with Harden did. And if this all ends badly, the “cheap or stupid?” question of this summer could turn into a legacy for the Thunder management that’s closer to cheap and stupid.