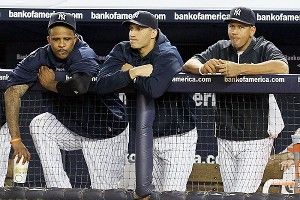 It’s really hard to be a Yankees fan. Nobody else understands.

Hey, I’m kidding. I’m not going to start off that way. I just have this weird thing where I like watching people get mad. Sorry about that. And if I’m being honest, the worldwide cyclone of hatred for the Yankees brand is heavy on my mind right now, and it’s making me a bit insecure. In a second, I’m going to talk about this thing they’re going through, this awful 43-game nightmare that dates back to July 18 and has seen their AL East lead dwindle from 10 games to one. I’ll kvetch about curses and injuries and the hazards of having a team full of old people. You’ll hate me, because I’m whining about the juggernaut franchise with the most championships in American professional sports history. And that’s fair. I don’t want sympathy. I just want to shout out to the blackness for a second. Before that, though, let’s talk about baseball collapses in a more general way.

In most sports — football, basketball, hockey — a collapse happens suddenly. You’re winning, things look great, and then Frank Reich comes off the bench and ruins your day. I’m not saying a protracted collapse is impossible — in the span of five weeks, the ’95 Oakland Raiders went from 8-2 to 8-8 and missed the playoffs, for example — but the shorter seasons and integrated nature of the team game, where the struggle of one player is less likely to become contagious and infect everyone, make the ’95 Raiders a rare exception. Typically, disaster happens over the course of hours, not days. The suddenness is wrenching, but it’s quick and then it’s over. In actual death terms, it’s like forgetting to look both ways as you cross the street one morning and getting flattened by an 18-wheeler.

But a baseball collapse? That’s long and drawn-out, and made excruciating by the presence of hope. Look at the Red Sox last season. On August 3, they held a one-game lead on the Yankees in the AL East, and a 10-game lead on the Angels for the wild-card spot. At that moment in time, the universe diagnosed them as terminally ill. It was inevitable from that very day that things would go bad; that they’d suffer a historic collapse that culminated in a final day so heartbreaking that it was comical. For two months, their fans watched them die by degrees, loss by loss, as leads evaporated, players faltered, and a great manager watched helplessly from the dugout. But unlike real life, when at least a fatal diagnosis gives you some time to prepare and cope, nobody knew what the future had in store for Boston. The fact is that one extra win on any given day could have held the barbarians at the gate, and Red Sox fans sensed that reality as it happened in actual time. Yeah, things were going bad, but just get us in the playoffs. Just get us there, in the sport with the most unpredictable postseason in the world, and who knows what might happen?

Watch Dan Shaughnessy in the first two minutes of this video. It was that bizarre last day of the season, and he was the spokesman for Red Sox nation. Notice the smile, and the confident tone, and the overall sense of a man telling you it was going to be OK when it was expressly not going to be OK, man. “Nothing to see here,” and then the bombs drop. The storm clouds were gathered behind him with the four horsemen of the Soxopalypse waiting for the trumpet of war to be blown, but he didn’t know it. None of us did. The Red Sox were terminally fucking ill, and their death was preordained. But at that moment, Shaughnessy thought he was right. The season would last at least another day. All the collapse talk might be for naught. All that doom and gloom, it was all just bogus emotion from panicky people.

What kind of person wants to believe in death?

The worst thing that could happen would be to have to play that game in Tampa tomorrow, you gotta hold on to this 3-2 lead tonight, but the Rays aren’t going to come back from 7-0 with an inning and a half to go.

And now, back to the Yankees. It feels bad, guys. It feels real bad. And I think it might be Bill Simmons’s fault. You may or may not remember that last year, for the deciding Game 5 of the Yankees-Tigers series, he had me and his friend JackO (another Yankee fan) exchange e-mails. It was 11 p.m. before I understood what was really happening:

It occurs to me now that Simmons’s dark plan is coming to fruition. We’re playing right into his hands. This is like in the movie Se7en when Brad Pitt can’t help but shoot the guy at the end. We’re pawns.

The Yankees lost. And then, of course, Simmons made us do it again at the start of this season. We knew what he was about — JackO even threatened to take him trampolining, Joba Chamberlain style, if he cursed us — but we did it anyway. The result? An unbelievable year of carnage. Almost every decent player has missed at least two weeks with injury, and Mariano Rivera, Michael Pineda, Chamberlain, Andy Pettitte, Ivan Nova, and Alex Rodriguez have been out for large chunks of time. And then there’s that whole clutch hitting problem, which I apparently write about a lot and which only seems to get worse.

So maybe Simmons cursed the Yankees through the medium of JackO and I. Or maybe the Yankees are just really old and injury-prone and slightly choke-y at times. Whatever the ultimate explanation, things feel pretty terminal right now. It’s been 43 games since July 18, over which time the Yanks have gone 19-24. Over that same period, here’s the record of three teams trying to chase them down in the divisional and wild-card races:

With 28 games remaining, the Yanks have the same record as Oakland, lead Baltimore by a game, and lead Tampa by 2.5. It doesn’t take a math wizard to see that if the pace continues, New York will miss the playoffs. By a lot. And the stress is taking its toll, as evidenced by manager Joe Girardi’s mini-breakdown when a fan in Chicago hurled an insult that he must have heard a million times before: “Yankees suck!”

And yet, and yet … there’s that awful hope. When they travel to Baltimore on Thursday, it will be the first time in what feels like an eternity that Derek Jeter, Curtis Granderson, Robinson Cano, Mark Teixeira, A-Rod, and Nick Swisher are all in the lineup. CC Sabathia is back, and Nova and Pettitte are working their way toward health. Hell, if they just swept Baltimore, it would probably put the Orioles down for good. And how can they keep winning, with such a shoddy run differential? Oakland is due for a setback, too, now that I think of it, and I don’t care how great Tampa Bay’s pitching is, the Rays will eventually go down because they can’t hit. Yeah, things are bad, but the playoffs are still right in our grasp …

So we beat on, boats against the current, borne back ceaselessly into the past. Or, to put it in my own words, we hold on to that nagging hope while refusing to acknowledge the ominous space behind our heads, where maybe, probably, the reaper looks on.