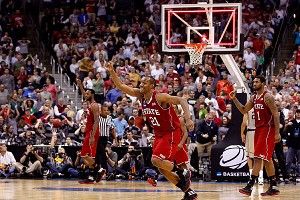 Raleigh has it tough, as far as North Carolina college towns go. First off, it’s only a few miles from Chapel Hill, which is universally recognized as a pretty idyllic place to spend your university years. Then there’s Durham, Duke’s home city, separated from campus by a wall and a good amount of mutual resentment. Durham hasn’t had the best reputation over the past couple decades, but it’s got a lot going on these days, and it’s becoming one of those classic cool-but-also-dangerous cities with a strong youth movement. In other words, it gets a lot of attention. That leaves Raleigh, which has a pretty staid, unglamorous rep as the state’s capital. But I’m here to tell you that it’s a sneaky-fun city, and while you might get lost in the shadow of the government buildings if you find yourself downtown on a weekend night, the NC State campus is underrated and there are fun places to be in the larger area once you know your way around.

So, there’s my essay on Raleigh. As for Lawrence, Kansas? No idea, but doesn’t the drone quality of the “Rock, Chalk, Jayhawk” chant make you think the town is depressing? Anyway, Raleigh wins. Life is unfair.

Mark Gottfried’s work at NC State in his first season has been nothing short of incredible, and this is not the first time I’ve sung his praises. He took over a team with a good amount of talent, but almost no self-belief, and now they’re in the Sweet 16. It’s a complete culture change, and it only took a season. Before this, Gottfried was at ESPN, where he worked for a couple years after 14 seasons at the helm of Alabama and Murray State. He’s compiled 303 career wins, two SEC regular-season championships, and a few regular-season and tournament championships in the Ohio Valley Conference. He brought the Crimson Tide to the Elite Eight once, in 2004, where they lost to eventual champion UConn.

But as good as Gottfried has been in Raleigh, his résumé can’t stack up to Bill Self’s. This is a guy who’s won the last seven Big 12 regular-season titles, five of the last seven conference tournament titles, more championships in the Big Ten (Illinois) and WAC (Tulsa), all on the way to 473 career wins and a .751 winning percentage. He’s been to the Elite Eight six times with three different teams, and he won the 2008 national title. All that, and he’s not even 50. If you had to pick a coach to start a team from scratch, Bill Self would have to be a top-three choice.

There’s been a lot of discussion over the past few weeks about Jayhawks. Namely, what the hell are they? The first line of the Wikipedia entry, helpfully, is “The origin of the term ‘Jayhawk’ (short for ‘Jayhawker’) is uncertain.” It may be somehow derived from people who supported John Jay in the Revolutionary War, but nobody knows for sure. What we do know is that in the lead-up to the Civil War, “Jayhawker” guerrilla bands were formed in loose association with the free states to answer the crimes of pro-slavery groups called “Border Ruffians.”

Unfortunately, they quickly turned into robber bands who added to the chaos and strife in Bleeding Kansas under a very loose pro-abolition banner. (John Brown was the inspiration, if not technically a Jayhawker himself — you can read about some of his exploits here, but be warned that it’s some heavy stuff.) Over time, the atrocities were forgotten and Kansas embraced the anti-slavery side of things in adopting the nickname. (Although last year, Osceola, Missouri, asked the university to remove the nickname because Jayhawkers had burned their town to the ground in 1861.) There was also some kind of connection to a mythical bird, maybe, but nobody remembers if that was true back in the Civil War period, or if it was invented when the bird mascot came into being in 1912. Anyway, KU decided early on to promote the idea that the nickname was a combination of the two different kinds of birds, which is not technically false, but the true origin is bloodier.

So there you go. That’s the Jayhawk. Pretty cool story. America, right? And if you think I’m giving the NC State Wolfpack a point after doing that research, you’re nuts.

Let’s start with NC State and C.J. Leslie, the stringy 6-foot-8 forward with heaps of athletic ability. He leads the Wolfpack with 14.6 points per game, and he’s proven to be a handful in the post for slower defenders. His 7.4 rebounds per game are second only to Richard Howell’s 9.1. Howell, a 6-foot-8 junior, can be a defensive force beneath the basket, and is capable of drawing fouls on offense, as we saw against Henry Sims and Georgetown in the second round. He’s also prone to committing stupid fouls of his own, and against Thomas Robinson, he really can’t afford to give anything away for free. Lorenzo Brown is the (occasionally) spectacular sophomore point guard, lightning quick and capable of jaw-dropping, ankle-breaking moves. He averages 12.8, and is followed closely by the sharpshooter Scott Wood (41.7 percent from 3) at 12.4. The starting five is rounded out by C.J. Williams, a rare senior on State’s roster, who scored 14 points against Georgetown but can be inconsistent in terms of scoring output.

Kansas, as we know, is led by player of the year candidate Thomas Robinson, who averages a double-double (17.7 points, 11.8 boards). St. Anthony’s product Tyshawn Taylor is the excellent Jayhawk point guard, scoring 16.9 per game and dishing out 4.7 assists. He’s also the team’s best 3-point threat (41.6 percent), and when he and Robinson pair up on the pick-and-roll, it’s incredibly hard to defend. The 7-foot Jeff Withey adds height and rebounding acumen (6.2 per game), Elijah Johnson averages 10 per game as a second guard (though he jacks up an awful lot of 3s for only shooting 33.3 percent), and Travis Releford, the physical guard averaging 8.4 points and 4.3 boards, rounds out the starting five.

The talent race here isn’t as lopsided as you might expect, but Taylor and Robinson have a slight talent advantage and a definite experience edge on Leslie and Brown. Jayhawks take the point.

This might be overstating it, but I’ll say it anyway: NC State is the best 11-seed in the history of the NCAA tournament. Better than George Mason in ’06? Yes. I really, really like this Net Efficiency Margin graph by CrashingTheDance, so I’ll link it again. It’s great because rather than rely on a season-long number, like Ken Pomeroy does, it takes into account the fact that a basketball team can be very different in March than in November. Take a look at the Midwest Region on that site, and notice which team is playing the best basketball lately. It’s NC State, which won’t come as a surprise to anyone who’s watched them over the past three weeks. After a really rough four-game stretch, in which they lost to the cream of the ACC crop (Duke, Florida State, UNC) and had a letdown at Clemson, the turnaround began with a huge win over Miami. Three more wins put them up against North Carolina again in the ACC semifinals, and only a series of bad calls prevented them from pulling off the upset (they lost by two).

At that point, the knock on State was that it still hadn’t won a big game, despite the improvement, but that all changed against Georgetown, when the Wolfpack overcame nerves and the inflexible Hoya defense to pull off a fantastic win. The point of all this is to say that the Wolfpack are a really, really tough Sweet 16 opponent, and Self knows it. I’m not a mind reader, but I bet he would rather have seen Georgetown or the 6-seed, San Diego State, from that mini-section rather than State.

Because the Wolfpack found themselves relatively late in the season, it’s tough to draw any useful conclusions from the team metrics. Yeah, their defense is pretty mediocre, and they don’t force a lot of turnovers, but they’ve held some very good offenses under 70 points for three straight games despite an up-tempo style. They’ve been solid on the glass (at both ends) all year, but they fought North Carolina to a draw (an incredibly hard feat) and out-boarded San Diego State and Georgetown, both good rebounding teams, by healthy margins. Anywhere you look, the story is the same; forget the cumulative numbers, because the recent ones are better.

But Kansas doesn’t need a disclaimer; the Jayhawks have been among the best teams in the country all year. The interior defense is the real jewel in the crown, holding opponents to the second-lowest 2-point field goal percentage in the country, behind only Kentucky, and blocking shots at the ninth-highest rate. The offense corresponds; they don’t shoot a ton of 3s compared to the rest of Division I, but their inside field goal percentage is 11th-best nationally. On both ends, they have a methodical, physical style augmented by very talented individual components. Nobody expected them to be this good at the start of the season, but Self has quietly built a team that’s just a tiny step below the four juggernauts — Carolina, Kentucky, Syracuse, and Ohio State.

Nobody has more momentum and mojo than State right now. They’re fueled by the UNC robbery, and their confidence has to be sky high after the Georgetown win. They even have the two best videos of March Madness; the selection show celebration, and Gottfried’s spine-tingling pregame speech before the Georgetown win.

THERE’S A GAME WAITING FOR YOU TO BE PLAYED IN ST. LOUIS!

I love the NC State story, and the wishful part of me hopes they advance to face North Carolina in a game that will mean total destruction of the Triangle area, but the fact remains that Bill Self is a masterful game coach who’s had an entire week to prepare. Sure, the Jayhawks struggled against Purdue, but at their best, they have too much interior strength and defensive discipline for State. Maybe if they go cold, and maybe if Wood gets hot and Brown can break down the inside better than I expected, the Pack can pull it off. But in the Sweet 16, you’ve got to expect both teams will play to their full potential, and under those conditions only Kansas can win.