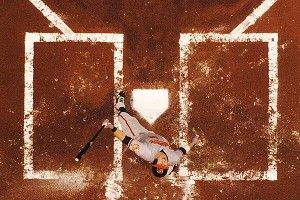 Every single team in the AL East is .500 or better. You hear that stat bandied about a lot these days, and it is a strange phenomenon. But here’s my favorite fact about the division:

The second-place New York Yankees have a +33 run differential, but the first-place Orioles only have +3.

Wait, that’s not actually very wild? How about this: The third-place Tampa Bay Rays have a +8 differential, still better than the Orioles. And the fourth-place Blue Jays are at +30. And the last-place Red Sox? +19.

Every other team in the division has a better run differential than the team in first place.

Even after just about a third of the season, that’s pretty insane. For reference, here are the run differential disparities between the best and worst teams in every other division:

And yet, Baltimore leads the best division in baseball with a +3 differential. Coolstandings.com, which calculates the playoff chances of each team for ESPN’s standings, gives the Orioles just a 38.4 percent chance of making the postseason, lower than every other team in the division except the Red Sox.

Why are there so many good teams in one division? Even if all five are actually great, shouldn’t they be beating up on each other? They can’t all possibly finish above .500, right? What gives? Will something give?

The answer is … not necessarily. It might take something approaching a statistical miracle, but there’s nothing that says any AL East teams must start losing and sink beneath the .500 line for good. The Orioles, Yankees, Rays, Blue Jays, and Red Sox are a combined 86-61 against teams out of the division, a .585 divisional winning percentage superior to the actual winning percentage of all but two teams in baseball — the Nationals and Dodgers.

When I saw these stats, my gut instinct was to think, Fine, but pretty soon they’ll be playing more games against divisional opponents, so they can’t just keep beating up on other teams all year. But it turns out that’s not true. Over the course of the season, AL East teams will play 72 games against another team in their division (18 each vs. the other four teams). That’s 44.4 percent of each team’s total games. Here’s a quick breakdown of how many each has played against AL East teams so far.

What we’re seeing here is that with the exception of the Yankees, every team in the East is either at or above their typical percentage of in-division games. And as a whole, the divisional percentage is 3 percent above what it will be at the end of the year. In English: From here on out, AL East teams will actually play fewer games in division, proportionally, than they have so far. (Sorry, that was barely English.)

That means that if the division maintains its great percentage against teams from outside the AL East, it could absolutely boast five teams above .500. There’s no obvious reckoning on the horizon, and these very basic stats don’t predict a correction.

Of course, the Orioles have been fortunate to amass such a strong record while essentially scoring the same number of runs they allow. Wednesday night’s 2-1 win against Boston was typical, and so was the 8-6 win the night before. In fact, the Orioles are 21-9 in games that go to extra innings or are decided by two runs or fewer, which is astounding. There are practical reasons at play — Baltimore’s bullpen ERA, 2.48, is the best in the American League — but there’s still a charmed-life thing going on, and it can disappear at any moment.

But at eight games above .500, the Orioles have given themselves some breathing room. In fact, the teams that appear most likely to collapse (O’s, Rays) are at the top, while the teams that look prone for a winning streak (Sox, Jays) are hovering at .500. If things start to balance out, there will be a grace period before anyone slips into sub-.500 territory.

Starting Friday, every AL East team embarks on three weeks of interleague play. Most of it will come against the NL East, the other best division in baseball. If the quintet maintain its excellent record out of division (the NL East’s winning percentage outside the division is .580, just a shade below the AL East, which means it’s going to be a fantastic few weeks), and all five teams still boast .500-or-better records on June 24, the boundary between “bizarre” and “normal” might be blurred beyond recognition.