Early in the fourth quarter of Saturday’s Texas-TCU game, the Longhorns were trailing 47-0. TCU lined up for a field goal. Snap, hold, wide right. Yesssss, I thought, savoring a small and useless victory. But what was this? A flag? “Disconcerting signals, defense,” said the ref. “That’s a five-yard penalty. It’ll still be fourth down.”

Disconcerting signals? The Longhorns had been called for a rare and bizarre penalty. (TCU’s re-kick was good.) Those of us in the thinkpiece business were in luck. There’s no better way to characterize the sheer strangeness, gut-punch bad luck, and Benny Hill ineptitude of the Longhorns’ season than “disconcerting signals.”

Let us list some of those signals: After the first quarter of Saturday’s game, TCU led 30-0. In a series that stretches back to 1897, the Horned Frogs had never scored more points in a single game. Charlie Strong agreed it was his worst day ever as a head coach.

On Saturday, Texas missed two field goals, had a snap soar over the punter’s head for a safety, and booted a free kick out of bounds. This season, the team had already lost chances to beat Cal and Oklahoma State because of a missed extra point and a shanked punt.

After being blown out by Notre Dame in Week 1, Strong took play-calling duties away from his offensive coordinator and gave them to the team’s receivers coach. The next week, Texas fired its athletic director. Texas’s offensive line coach is mired in an insane lawsuit with his former employer. The schadenfreude enjoyed by former Southwest Conference schedule-fillers like TCU (“It was a quality homecoming win,” TCU’s AD crowed on Saturday) has been joined by a jokey-despairing patter coming from UT alumni — including Jordan Spieth.

I’m not finished: During the TCU game, someone who writes the Texas Rangers’ official Twitter account turned away from a hugely important baseball game to tweet, “Fire Charlie.# bye.” (The Rangers have since apologized.)

I’m still not finished: At halftime of the TCU game, when the Longhorns trailed 37-0, Kris Boyd, a promising Texas freshman cornerback, turned away from the halftime speech to retweet someone’s suggestion that he ought to transfer to Texas A&M. (Boyd has since apologized.)

In times like these, people who post on message boards are consumed by two questions: Is Charlie Strong the right guy to turn around the program? And how soon will he be fired? But that’s unknowable. The best answers are “I don’t know” and “maybe never.”

More interesting — to me, anyway — is how Strong finds his destiny tied to his predecessor, Mack Brown. Strong was hired because he promised to repudiate everything Brown stood for, to re-create the program in his own image. But Strong has been slow to produce wins — as a result, to a great extent, of the talent deficit he inherited from Brown. What started out as an effort to kick Brown out of Austin has succeeded only in securing a spot for him on the sideline, hovering over a 1-4 start. 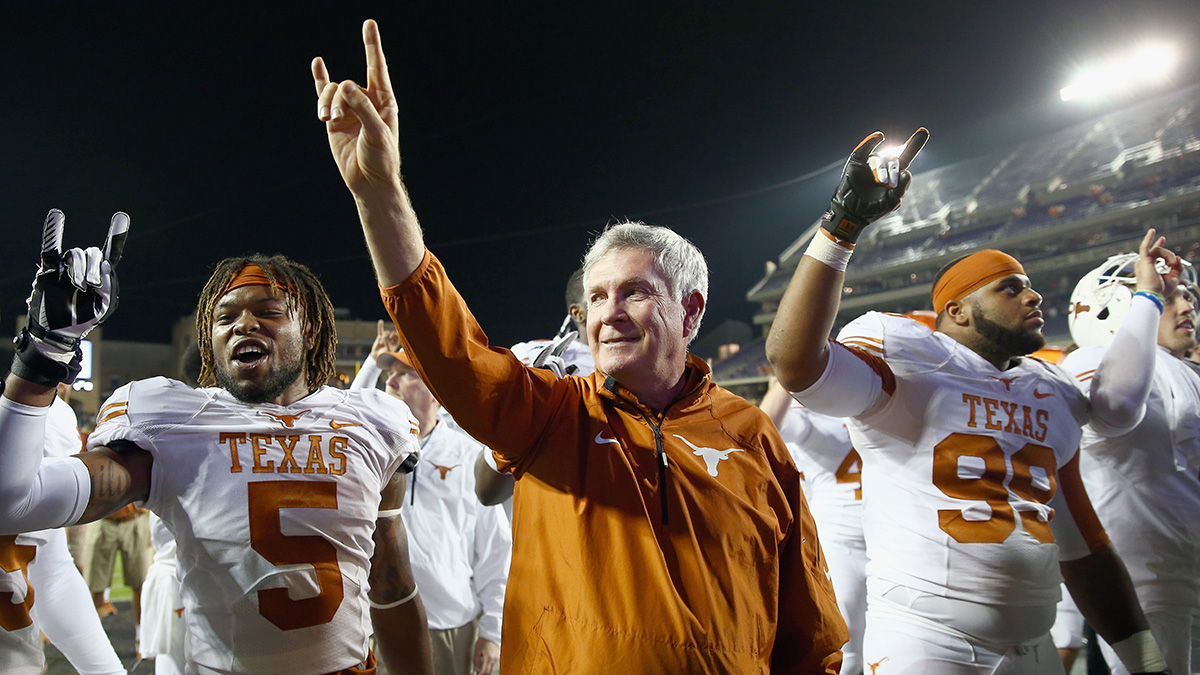 What Texas attempted to do with the transition between Brown and Strong is fairly unusual. Most schools that lose a successful coach desperately try to keep the good times rolling. (What else can explain the Kiffin and Sark eras at USC?) But because Mack Brown’s run ended so badly and carried on so long past its sell date, Brown has seen his final years on the job become as big an issue for Texas fans as who plays quarterback and whether that QB is running the spread. Nearly everything written in Charlie’s defense is, to one degree or another, part of a proxy war against Mack.

The most explicit form this takes is noting that Strong inherited a talentless, terrible football team in 2014. Take these tweets that were written during the TCU game:

Charlie Strong is not without some blame, but casual fans don't realize how bad the situation in Austin was post-Mack Brown.

I get the criticism of Charlie Strong, but he inherited a #Texas team void of talent. No SRs look draftable; their best players are freshmen

Or take word whizzes like Barking Carnival’s Scipio Tex (a.k.a. Paul Wadlington), who regularly pushes back on the fans who want to create a master narrative of Strong’s ineptitude.

Or — speaking for the other side — take Brown himself. Asked last month by the San Antonio Express-News if he feels responsible for the current mess, he said, “I really don’t.” During the ABC halftime show Saturday, he subtly doubled down, saying, “Transitions are tough. We’ve all been through it …”

Brown and Strong are completely different coaches. Brown was basically a softie. It became de rigueur in any piece about the floundering Longhorns of 2010-13 to describe the program’s “country club atmosphere.” Sometimes the caricature seemed real: When Longhorns players traveled from the locker room to the practice field, they rode in an air-conditioned bus.

Strong set out to demolish this idea. He took the bus out of service. He removed the logo from the players’ helmets for a time — one of the oldest tricks in the coach’s get-tough handbook. Strong didn’t much mention Brown’s name, but he talked a lot about how he was erasing Brown’s legacy. “The image at Texas has been a program that didn’t play physical,” he told Texas Monthly’s Jason Cohen last year. “I want to build the toughness back into the program.” Strong added, “It’s a brand.”

Brown and Strong are similar in the sense that they see themselves not just as coaches but as moral exemplars. Their ideas of morality, however, are almost completely at odds. Brown saw his job as protecting players from the ravages of college football — coaches who would “cut” them, street agents who would seduce them, football factories that smother them in anything but love.

Strong sees himself protecting players from sloth, avarice, drugs. His is an older, squarer kind of morality — Woody Hayes meets McGruff the Crime Dog. Its public manifestation — its brand, if you will — has been Strong’s five “core values” (which include everything from not hitting women to not carrying guns) to his dismissal of nine Brown-recruited players during his first year as coach. A good way to understand the nature of Strong’s moral regimen is this: When Roger Goodell needed to look like more of a tough guy, he visited Strong in Austin.

When it comes to college football, I line up with Brown’s idea of morality. But Strong’s gambit paid off. Last year, he was initially slow in getting commitments. But he found a willing ear in linebacker Malik Jefferson, the state’s no. 1 recruit. “They have grit,” Jefferson noted of the Longhorns last season, even as they stumbled through their early schedule. At the same time, Texas A&M, the Longhorns’ biggest competition for Jefferson, had a stretch during which 10 players were arrested in seven months. Those infractions, plus the air of iniquity lingering around Aggies football after Johnny Manziel revitalized the program, reinforced Texas’s virtuous image under Strong. Jefferson signed with the Longhorns, and Strong locked down a top-10 class. The rebranding had paid off. 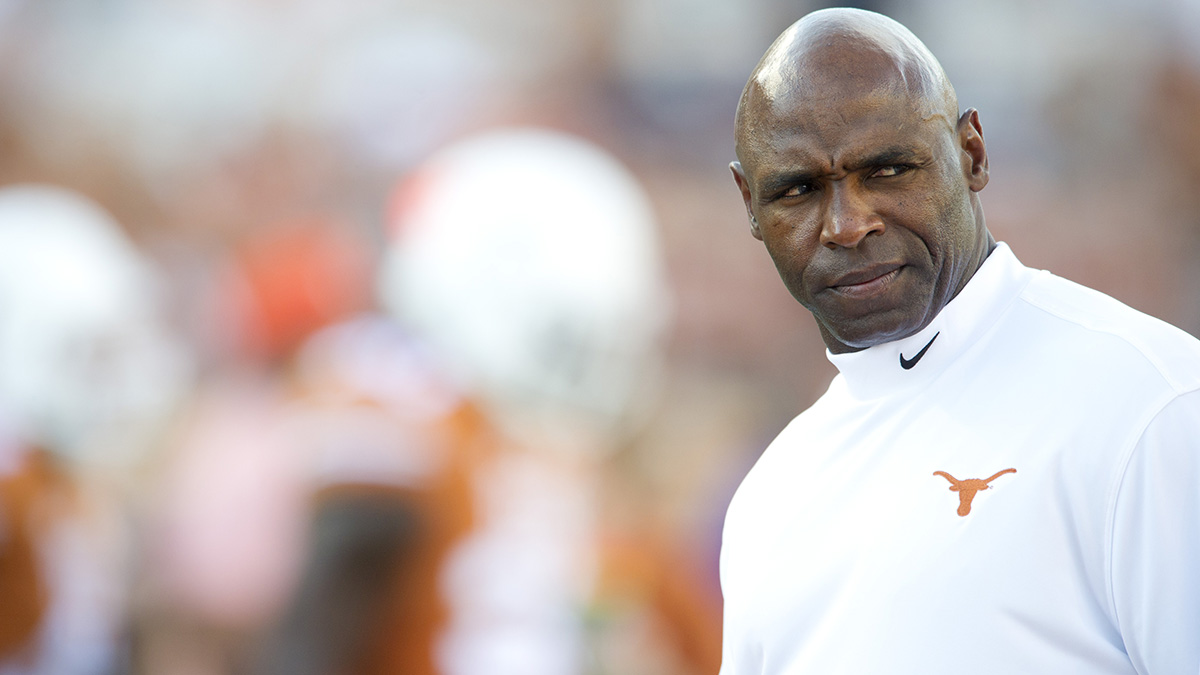 Another thing that separates Brown and Strong is their basic approach to being a head coach. Brown regarded his job as letting other people, from his assistants to his high school coaching pals, do their jobs. There were times when it felt like everyone in the state of Texas was coaching the Longhorns together. This approach had its benefits. Brown is remembered for standing on the field at the Rose Bowl, minutes after winning the national championship, and sharing the glory with all the high school coaches in Texas — a PR masterstroke. He was willing to hire big-name coordinators like Will Muschamp, even if (and when) Muschamp began to chip away at Brown’s aura.

The Brown era faded when he became too detached from the nitty-gritty of football, when he began whirling through different offensive schemes and recruiting players who didn’t fit into any of them. At some point, Brown seemed to crowdsource himself.

Here, too, Strong is Brown’s opposite. Where Brown is external, Strong is internal. Where Brown leans on others, Strong is self-reliant. Given the money to hire the best assistants in college football, Strong chose to bring both of his coordinators from Louisville. (Even offensive line coach Joe Wickline, his one “name” hire, had been a pal when he and Strong were young coaches on the make at Florida.) Under Brown, Texas had belatedly set up a “player-personnel” office to scout prospects and keep up with the big boys. Strong didn’t keep the employee who ran it, preferring to again install his own guy from Louisville. Strong’s firm sense of self was initially seen as a plus: If the Texas defense broke down, it was argued, Strong himself would know how to fix it.

On some recent trips back to Texas, I talked to two high school coaches. Both have won state titles; both are “Texas guys” (as opposed to A&M guys); one has a player at Texas now. Neither coach had ever met Charlie Strong, nor talked to him on the phone, nor exchanged emails with him. One coach told me he’d been in the same room with Strong at a local coaches’ meeting, but Strong left after giving a speech without sticking around to shake hands. The other coach told me that when Texas recruited one of his players, Strong’s assistants funneled their communications through the recruit rather than the coach. This was the case even when the Texas assistants came to watch the recruit at high school practice — entering the high school coach’s domain, as it were.

At some point in our talk, the second coach pointed across his office. There, behind glass, was a Mack Brown autographed football.

A similar story, published last year on ESPN Insider, depicted Strong as awkward and aloof. Neither coach I talked to subscribed to that idea. They both liked Strong and his staff very much and wanted them to win. But they were struck by how much of the burden they were trying to shoulder themselves. The message coming out of Bellmont Hall was, We’ve got this.

The early profiles of Strong reported that he rises every morning at four to jog. “My runs are my time,” he told ESPN The Magazine’s Tim Keown. This week, it doesn’t take too much to imagine Strong’s mind working feverishly during those runs, as those bad snaps and missed field goals and blown coverages replay in his head.

This self-reliance is utterly rational. Strong came from modest beginnings. He left his home state of Arkansas in his twenties to take a graduate assistant job at Florida. “Coming from where I came from,” he told Keown, “you knew this: You could not fail. You couldn’t go back.” After two successful tours as a defensive coordinator at Florida, Strong was dicked over for head coaching jobs for years, which he believes was because he is black and his wife is white.

If Strong’s stoic self-reliance seemed jarring after Brown’s group hug, it was exacerbated by Texas’s now-former AD, Steve Patterson. Another, chummier AD could have served as Strong’s PR department, his appointed back-slapper, while Strong focused on restocking the roster. Instead, Patterson was himself a loner — one of the many reasons he was fired.

Mack Brown ultimately failed at Texas because he decentralized too much. If Strong fails — and I stress that we’re not there yet, not even at 1-4 — it will be for the opposite reason. Most Texas fans can live with the bum offensive coordinator hire. They can live with waiting while the program is rebuilt from the smoldering pile that Brown left behind. They can even live with a couple of blowout losses to TCU. They can live with the delayed gratification that Brown’s final seasons made inevitable. But the idea that one man, however talented, however fiercely dedicated to the cause, can fix Texas Longhorns football all by himself? That counts as a disconcerting signal.