If you’ve rooted against the Seahawks the past two years, chances are you’ve made all these arguments. But nobody can really argue with what’s happened on the field.

And as dominant as the Seahawks have been, we’ve never taken the time to explain exactly how outrageous this defense really is. So I spent Wednesday afternoon getting lost in a YouTube wormhole of Seahawks interviews and highlight videos from this year. To help get you ready for this weekend, and to explain why anyone complaining about this defense is missing the point. There’s nothing from the NFL this year that’s been more awesome than the defense in Seattle.

In a sports world obsessed with overachieving underdogs like Russell Wilson, it seems like the Seahawks D is weirdly undercelebrated. Look at the biggest names on the roster. Richard Sherman was a fifth-round pick who had teams trying to switch him to receiver at the NFL combine. Kam Chancellor went in the fifth round, too, and then turned into the most feared strong safety in the league. Red Bryant was a failed defensive tackle out of the fourth round until Pete Carroll switched him to defensive end and he turned into a monster. Michael Bennett was undrafted out of college before he started ruining quarterbacks’ lives every week.

The whole defense follows this pattern. The secondary lost Walter Thurmond and Brandon Browner to injury and suspension midway through the year, and they replaced them with Byron Maxwell (fifth-round pick) and Jeremy Lane (sixth-round pick), both of whom have been fantastic. Even Earl Thomas, one of the only first-round picks on the defense, has dealt with people questioning his size (5-foot-10) since college.

Nobody thinks of these guys as underdogs, obviously. We don’t talk about them the way we talk about Danny Woodhead. It’s hard to call anyone an underdog when they’re bigger and faster and all they do is whup people’s asses. But everything that makes it hard to call them underdogs — the highlights, the trash talk, the dominance — makes it twice as cool that most of these guys were never supposed to be here.

“I look at the write-ups people wrote,” Sherman said at his press conference Wednesday. “They say ‘He’s stiff, he has no ball skills, he has no explosion, he doesn’t have the instincts to play corner.’ Everything negative, I find it. I use it as fuel. To make the chip [on my shoulder] a little bit bigger, so that things like All-Pros, and Pro Bowls, and all these awards don’t mean as much. You’re focused on a chip, you’re staying hungry.”

Nothing gets a grumpy old sports fan more excited than a team’s whole being greater than the sum of its parts. I have no idea if that’s what’s happened in Seattle over the past few years, but the players clearly think that’s part of it.

“A dominant force,” is how Thomas described the secondary to Fox earlier this year. “A group that feeds off each other, a group that’s connected, a group that communicates well. Number one thing I want everybody to see is how much we enjoy each other out there.”

“I wasn’t really a big hitter,” Sherman adds. “But when you’re in a room with these guys who lay their helmet every time, you can’t be the odd man who don’t hit.”

Especially in the secondary, the best parts of every individual’s game become contagious, and the finished product is a group without any clear weaknesses. 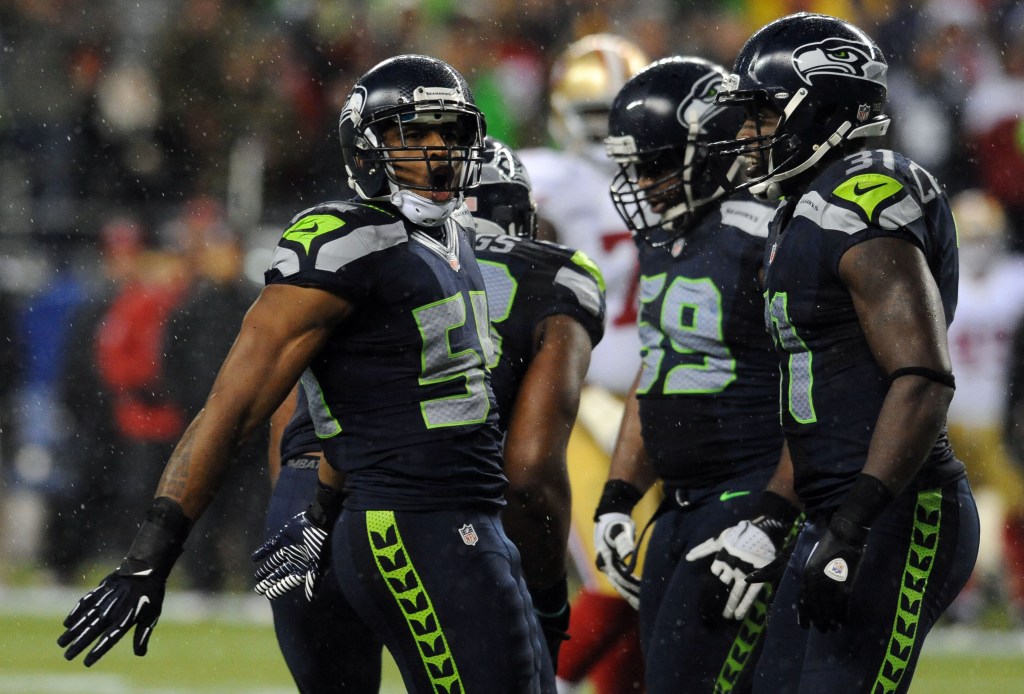 This week a reporter at Seattle’s press conference congratulated Thomas on bullying the Saints receivers into irrelevance last Saturday, and wondered how they’d adjust to bigger, more physical 49ers receivers. “We can bully whoever we want to bully,” he said. “It’s about us. It’s about a mind-set.”

The Seahawks play fuck you football and they play it better than anyone. That’s the mind-set. They talk about bullying people, and then go bully people.

A former player tweeted a story about Chancellor back in September: “[One tight end] ran this crossing route and started to drift, and on the other side of that drift lived a young man. A 6 foot 5 230 pound young man. This young man hates visitors. He has a sign on his yard that says… ‘Trespassers will be Hugged & THUGGED’. This young man hit this Tight End SO HARD, I swear I saw that TE’s soul leave Qwest Field right on that 35 yard line. He hit him so hard the entire stadium went mute. They didn’t want to cheer someone being killed on the field.”

As Rams QB Kellen Clemens said earlier this year, “Kam Chancellor, have mercy, do not be standing on the tracks when that freight train comes down the tunnel.”

Chancellor keeps it diplomatic. “I’m the type that never calls guys scared because you have to have guts to play this game,” he says. “I just say they make smart decisions.”

The whole defense is like this. Even as it’s become harder for me to love football in all its psychotic glory, it’s impossible not to love the Seahawks D, because they do psychotic glory so much better than anyone else. They’re ruthless regardless of the score, they talk trash after pretty much every play, and they back it up. Sherman on Wednesday: “Everybody has a switch that they turn on on game day. You can’t be these intense, super aggressive, super physical guys off the field, or you’d go to jail.”

Smarter Than You Realize

“Our preparation separates us more than anything,” Sherman told Fox this fall. “Giving teams the utmost respect. Watching film from the first time we played, watching the six games before, the third down copies. Doing our due diligence to make sure we’re prepared for any look they give us.”

Whenever Peyton Manning retires, fans will spend the rest of his life celebrating his preparation and obsessive film study. People rarely say this about the Seahawks defense, but it’s all there.

Most of that video is the standard film breakdown segment we see about a lot of great players. But the best part is toward the end, when he’s breaking down a tipped ball. “Earl was close,” he says. “I tried to tip it to Earl, but I overshot him. We talk about this all the time, if you’re close enough, don’t hit me. I’ll tip it right to you.”

Fast-forward to Week 15 against the Giants this year, and there’s Sherman tipping an Eli Manning pass right to Thomas for the pick in the end zone. (Video here.) Two years of dominance is not a coincidence.

“We might be celebrating,” Thomas explained to Fox. “But it’s just our preparation. We suffer hard during the week, and it pays off every time we step on the football field.”

“You gotta have a playmaker’s mentality,” Thomas said at his press conference when asked what it takes to be part of this defense. “You gotta have certain confidence about yourself. That’s what we all bring to the table.”

“On any given drive,” Sherman says, “seeing us step on the field on defense is like an offense going out there. We expect to make a play.”

Sherman had the most interceptions in the league despite being targeted less often than any corner in football, and the Seahawks had the no. 1 scoring defense in football. People call them dirty — the Wall Street Journal said last week they rely on “rampant interference” every week — and Seattle apologizes for nothing. “DBs playing physical is the way football should be,” Sherman said when asked about it this week. “A lot of people want to see great offense, well you see great offense all the time. We stand up there and have a dogfight every play.”

“There’s gonna be some pushing off,” he adds. “Some grabbin’ here and there, that’s the game of football. That’s how it is. That’s how it’s always been. Ask the Michael Irvins of the world, the Jerry Rices, who had to deal with those before these [new interference] rules.”

That’s probably what’s most fun about watching this team. Everywhere else in football defenses have been rendered more and more impotent — a combination of rule changes and parity has meant “bend but don’t break” becomes the goal. But the Seahawks want to break you in half.

You get to just sit back and watch them attack. Destroy running backs and helpless quarterbacks, bully receivers, make plays, score touchdowns, scream at Tom Brady, and dance the dance of kings.

My favorite Seahawks story this year is actually from when Sherman was at Stanford. After a Valentine’s Day tradition woke people up early in the morning, whiny college students started email chain complaining about it. By the grace of the Internet God, someone shared the emails with Deadspin a few months ago.

Samples from around the dorm: “Some of us have midterms this morning. If you really wanted people to have a happy Valentine’s Day, why the Fuck would wake us up at 6 in the goddamn morning? What the hell is wrong with you?” … “The tradition of having men give women flowers is totally heteronormative and it sends a clear message to residents that Valentine’s Day is a day of celebration of heterosexual love. This tradition also enforces gender roles in which the woman is passive and the man is active.”

After a bunch of these emails, Sherman speaks up (sic‘d throughout): “To all You assholes complaining … If you dint like it live in another dorm next year then because tradition is tradition and If your Homosexual don’t celebrate the holidayy if its that big of a deal but im tired of yall complaining about a couple of hours of sleep yall are some assholes. Stop bitching and f**kin adapt I wake up that early everyday and I aint complaining so you guys really need to just shut the f**k up. Everyone else had fun so f**k the people who are complaining.”

It’s glorious. Not even for the message, but for its general middle-finger tone. “Stop bitching and adapt” could be this defense’s message to the whole world. To Jim Harbaugh whining about PEDs, to offensive coordinators complaining about interference, or to anyone who thinks they don’t respect the game.

All the most fun teams throughout history have pissed people off for one reason or another — teams that will infuriate you, but play so well you can’t say a word. That’s this defense.

There’s never any shortage of coverage for the NFL — from scorching hot takes to X’s and O’s nerdery — but sometimes we miss the bigger picture. What’s happening in Seattle doesn’t happen very often. It’s too hard for teams to keep all their best players, parity makes it harder on the best teams, and the game grinds stars down faster than ever. Guys like Richard Sherman get humbled by reality, Earl Thomas gets hurt, that murderous defensive line gets broken up by free agency. All this could end Sunday, or next year, or whenever. It’s all even more reason to appreciate them in the meantime.

They could totally lose to the 49ers this weekend, because San Francisco’s hitting on all cylinders and has a team that’s almost as ridiculous as the Seahawks. And yes, Seattle’s had PEDs scandals over and over again the past few years, they talk trash constantly, they get away with penalties, and everything else anyone complains about is probably true.

Also true: Win or lose, the Seahawks defense is everything anyone could ever want football to be. Hitting and trash talk and freak athletes and film geeks and obnoxious celebrations and teammates who make each other better.

Now it’s time for the NFC title game, so this is just a reminder: Don’t be the one bitching about trash talk or PEDs or pass interference. The Seahawks are easy to hate sometimes, but you’ll have so much more fun loving them.