Soccer, as much as any other sport, is a young man’s game. Players peak around 24, and by 30 they’re nervously looking over their shoulders for a younger, better, ready-made replacement. Come 35, the few superstars still hanging on get the Turkish, Middle Eastern, or MLS retirement package. Hit 40, and you’re either named Ryan Giggs or retired.

With that in mind, it’s a bit odd that the two clubs that fought for last season’s English Premier League crown came into this season banking on the smooth operation of a pair of midfield fulcrums sitting on the wrong side of three decades. While Steven Gerrard and Yaya Touré managed just fine for Liverpool and Manchester City then, this year has been a struggle for their aging legs. Is it just a blip in form? Or is Father Time finally catching up with two of the best midfielders the league has ever seen? 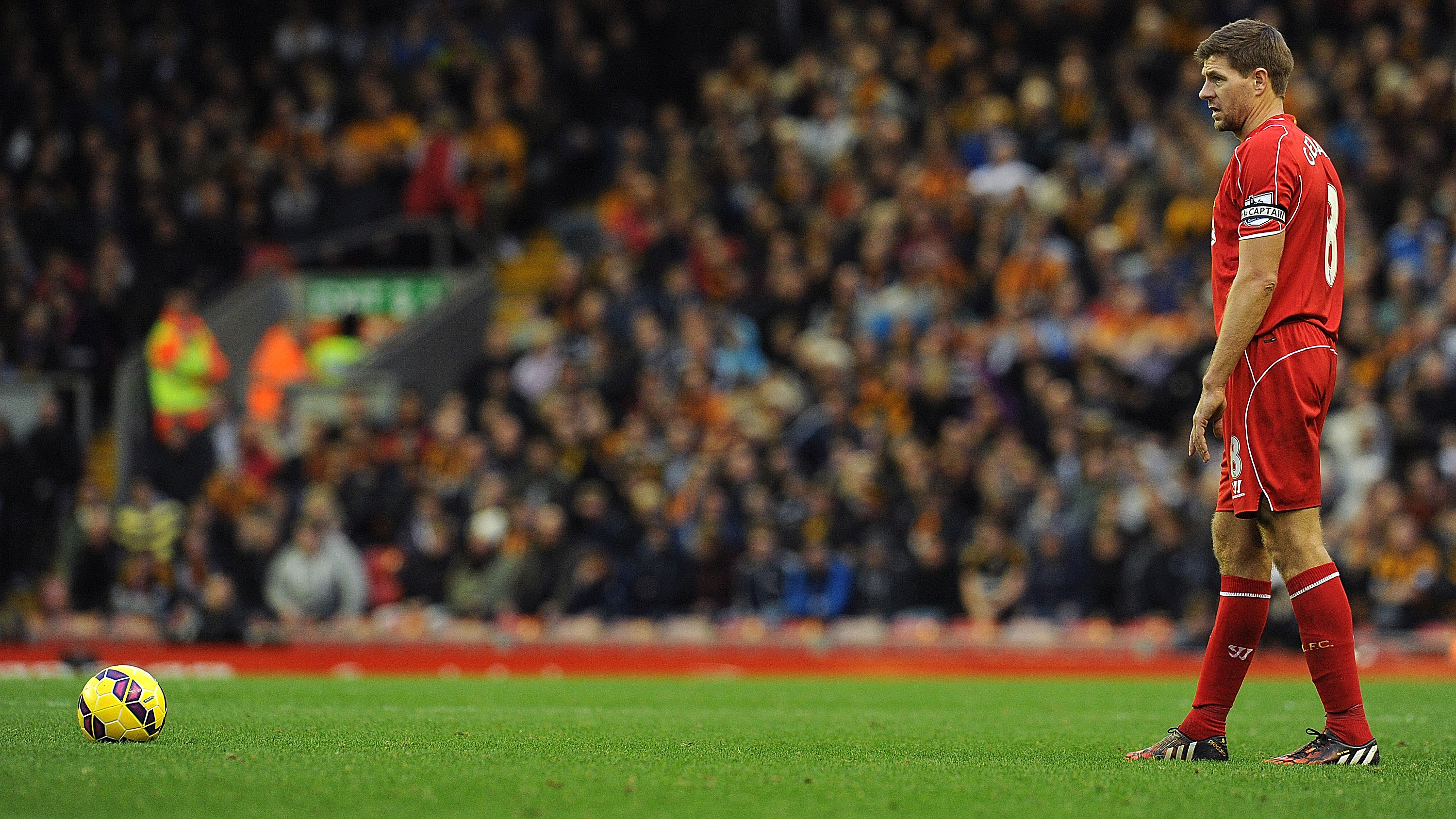 Let’s start with Gerrard. As the 34-year-old’s effectiveness began to wane right around this time last season, he morphed, aided by Brendan Rodgers, from a do-everything-all-the-time force into Liverpool’s deep-lying playmaker. As evidenced by the team’s late-season run, the move worked. It seemed like every weekend, Gerrard would key a Liverpool attack by quickly pinging the ball forward to Daniel Sturridge running in behind a defense, or to Luis Suárez drifting into pockets of space. At least superficially, much of Liverpool’s attacking power came from Gerrard. He had 13 assists, which led the league, in addition to creating the second-most chances (nine) with passes from his own half. (All stats courtesy of ESPN Stats & Info.)

If you look a little deeper, though, exactly how valuable or repeatable Gerrard’s contributions were comes into question. Of his 13 assists, a full 11 came from set plays. Those nine chances created from his own half led to a meager total of 0.80 expected goals (and one actual goal) — not exactly the measure of a guy putting it on a plate for his teammates. Perhaps, then, the greatest achievement of Liverpool’s evolution last season was that it turned Gerrard into a cog in the system, instead of its focal point.

The same applies defensively. Playing at the base of a narrow diamond, Gerrard always had two other midfielders protecting him. It cut down on the space he had to cover and shielded him from being exposed by quicker, craftier attacking midfielders. With that system in place, the Liverpool captain held his own, managing 2.07 tackles and 1.40 interceptions per 90 minutes. This year, those numbers are down to 1.27 and 0.59, respectively. It’s tempting to look at those stats and conclude that Gerrard has hit the age wall — that he can no longer even do the more modest amount of running he was forced into last season.

But that’s only partially true. Defensive numbers are tricky and largely contextual. While Gerrard is playing for the same team, under the same coach, and in nominally the same position as last season, a lot has changed. First of all, Liverpool are rarely playing with two strikers, and rather than sitting at the base of a diamond, Gerrard is often one of three midfielders in either a 4-3-3 or a 4-2-3-1. Liverpool also aren’t spending nearly as much time playing from ahead, compared with the previous campaign. Last year, they led the league in goals scored in the opening 30 minutes (37 of their 101 total goals), and scoring about 37 percent of their goals in the opening third well outpaced the league, which scored only 27 percent of its goals that early. This year, Liverpool are scoring less — but also rarely scoring early. Of the 14 goals they’ve scored so far, only four have come in the first 30 minutes. Although that a small sample size, it equates to a much more average 28.5 percent.

Goals change games. Liverpool spent tons of time last year eviscerating teams that were trying to catch up. The midfielders protecting Gerrard didn’t have to get forward to build chances because opponents were already more open. In turn, Gerrard was less isolated, less exposed, and had less real estate to manage. Now, as they struggle to score, their midfielders need to get up in support more aggressively and Gerrard then has more to do on his own defensively, which results in a worse performance. Is that him suddenly getting older? Not really, although it’s certainly possible that he’s slowed down from last year. But more important, it’s that the measures Rodgers put in place to limit Gerrard’s inadequacies don’t work nearly as well when the team isn’t playing from a winning position. That means that either new measures are required or Rodgers has to consider dropping Gerrard in favor of somebody more physically suited to play the position. So far, save for the one game at the Bernabéu, he’s steadfastly refused to do either. 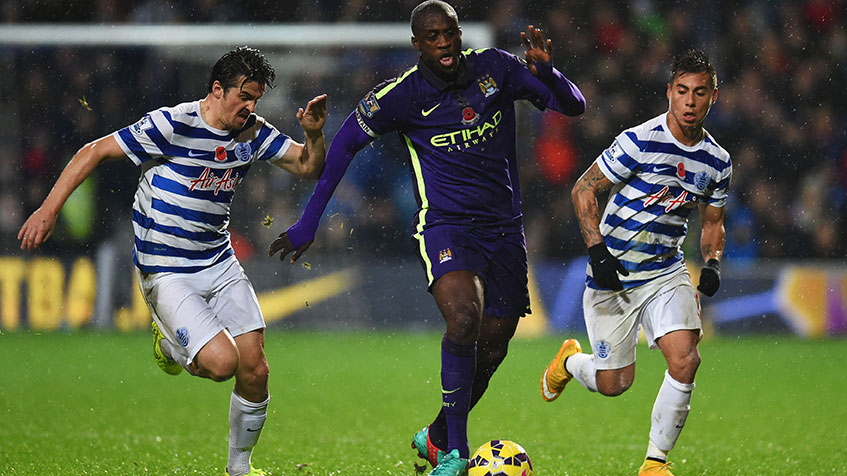 If the case of Gerrard’s decline is a subtle one, built on tactics and timing, then Touré’s is relatively simple. The 31-year-old has a reputation for being a box-to-box midfielder, but in reality he hasn’t truly occupied that role in several years. Even before Manuel Pellegrini’s arrival, Roberto Mancini often deployed the Ivorian in an attacking midfield spot with two holding players behind. As Gerrard’s lack of mobility has moved him backward, Touré has shifted in the other direction.

Last season it was easy to ignore Touré’s positioning because, for most of the year, Fernandinho was a superhero behind him. Touré also scored a ton of goals — and it’s easy to ignore lots of stuff when a player is scoring goals. About those goals, though: They maybe weren’t quite as impressive as you thought. First of all, in the absence of Sergio “What’s a Hamstring?” Agüero, Touré took City’s penalties, so that accounts for six of his 20 goals. While 14 goals from a midfielder sure ain’t nothing, another five of those came from set pieces … on a mind-blowing eight total shots. I don’t care if you are the test-tube baby of Pelé, Cristiano Ronaldo, and a mule leg — shooting five of eight from set pieces is totally unsustainable. They’re free kicks, not free throws.

That leaves us, then, with nine goals from open play. (We’ll include the two he scored from corner kicks here because having midfielders who score on corner kicks seems like a good thing.) Adjust that to “per 90 minutes played,” and it becomes a tally of 0.26. That’s exactly the same goal-scoring rate as guys like Gylfi Sigurdsson and Christian Eriksen, which is not to say that Yaya isn’t any better than those guys; of course he is. Rather, it’s to highlight that so much of what made Yaya so good last year was what happened when the ball wasn’t actually in play.

Still, all that goal scoring also overshadowed Touré’s assist numbers. He had nine from open play last year, which was third-best in the league. (Per 90, since he played so many minutes, he drops down to a more reasonable 13th with 0.26.) So while the eye-catching goal numbers might be a result of dead-ball situations, there was clearly a lot of meat behind Touré’s attacking performance last year. That he had the freedom to play so far forward was certainly a big part of the equation.

As with Gerrard, it’s not as if Touré, who currently has one goal and one assist in 10 games, has suddenly fallen off a cliff. Rather, it’s that a lot of the pieces that surrounded him, allowing him to excel, aren’t flowing like they used to. Fernandinho can’t quite shake off this summer’s World Cup disaster and has been struggling to get back to both fitness and form. Summer addition Fernando, while a perfectly capable player, certainly isn’t the one-man wrecking ball Fernandinho was at his peak last year. What seems like a dramatic change in Touré’s ability to move up and down the field is probably a more modest decline exacerbated by his midfield partner’s absence. Also, Touré is 0-for-6 on free kicks this year. It turns out you can’t just tuck the ball in the corner whenever you feel like it.

Neither Touré nor Gerrard, nor anybody else on the planet for that matter, is getting any younger. Short of discovering that time is, in fact, not linear but an actual physical dimension, both City and Liverpool have had to take steps to limit the damage caused by the aging of their star midfielders. It’s just that, right now, those measures aren’t working all that well.

Where the two players differ, though, is that Touré still clearly contributes from open play in addition to his set piece production, while Liverpool’s long-standing captain doesn’t appear to be doing so. For Gerrard, that might mean it’s finally time for him to either move on or be phased out as a key piece of Liverpool’s squad. It’s becoming less clear by the day what skills the club captain actually adds to the team with his presence. While the absurd dead-ball record may have exaggerated his goal count, Touré still has a tremendous amount to contribute on the field. Get the pieces around him clicking, and his strengths clearly outweigh his weaknesses — at least for another season or two.