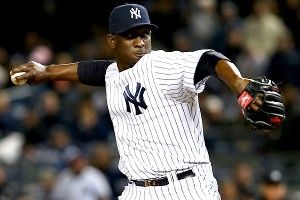 After months of waiting, Rafael Soriano finally landed a multi-year contract with perhaps the only team for whom such a deal would’ve made sense — the Washington Nationals.

The 33-year-old right-hander will make $28 million over the next two years, with a vesting option for a third if he finishes 120 games over the next two seasons, something only two relief pitchers did over the 2011 and 2012 seasons.

The Nats already owned a phalanx of capable right-handed relievers. Tyler Clippard and Drew Storen figured to line up as the team’s eighth- and ninth-inning options, with manager Davey Johnson set to rotate roles as health and performance dictated. He did so in 2012 and got reasonable results given the duo’s price (and relative lack of closing experience, if that’s your jam), with Clippard seizing the closer role for much of the season as Storen recovered from elbow surgery, followed by Storen returning to ninth-inning duties later in the year. Ryan Mattheus and Christian Garcia figured to handle setup roles.

But that plan wasn’t perfect, at least not for a team with enough talent elsewhere on the roster to be considered one of the favorites, if not the favorite, to win the NL pennant. Storen struggled at times upon his second-half return last season before rounding back into shape, while Clippard was one of the most heavily used relief arms in the league. Moreover, questions remained over Mattheus’s poor strikeout rate and Garcia having just 12⅔ major league innings under his belt. Soriano’s arrival allows Johnson to lighten the burden — in both workload and especially leverage — for the rest of the pen. The Nats still lack front-line lefty relief options, after Sean Burnett signed with the Angels. But they’ll have plenty of options to upgrade at that spot, either by trading Mike Morse (Yankees? Rays?) and the $7 million salary that became expendable when Adam LaRoche re-signed, waiting until the season starts and pursuing a deal then, or maybe even getting a comeback season from minor league free agent Bill Bray.

It makes sense to do the deal given the boost the bullpen got, the lack of needs elsewhere on the roster (no team is better set one through 25), and the fact that the payroll will now sit at about $120 million — a jump of about 30 percent compared to last year, but still miles from the Dodgers/Yankees stratosphere, tens of millions away from luxury-tax thresholds, and well within the means of the Lerner family, one of the richest ownership groups in the game. As the Washington Post‘s Adam Kilgore reported, 87-year-old Ted Lerner himself played a hands-on role in getting the deal done.

Which makes sense, when you think about it. In signing Soriano, the Nats forfeited the 29th overall pick in this summer’s amateur draft. As strong as Soriano has been in three of the past four seasons (strikeout rate of better than one per inning, average of 70 appearances over the 2009, 2010, and 2012 seasons, a league-best 37.6 percent strikeout rate on cutters in 2012; best in baseball, per ESPN Stats & Info), he was much shakier in 2011, triggering hair-pulling among Yankees fans who couldn’t understand the huge three-year deal he received, especially with Mariano Rivera in tow. But after he very capably seized last year’s closer role when Rivera lost the season to a knee injury, Soriano became the best available relief pitcher on the market, and he’ll now be the highest-paid reliever in baseball for 2013. Given how most teams have become more conservative about breaking the bank for relievers, and especially about sacrificing draft picks given the new bonus-pool rules, it’s entirely possible that the Nationals were bidding against themselves here. Still, just as octogenarian owner Mike Ilitch and the Tigers (maybe the only other team for whom Soriano would have been a logical fit at this price) opened the vault for Prince Fielder when no one else was likely to come close to that price, the much, much smaller Soriano deal could be called a reasonable overpay: a player who clearly improves the team, for an elderly owner who no doubt sorely wants to see a World Series winner.

The deal also marks another supporting data point for superagent Scott Boras’s approach. He represented Fielder, as well as Jayson Werth, another player who probably wasn’t getting anywhere near as much from another team as the $126 million the Nats ultimately gave him. With Washington also employing Boras clients Bryce Harper and Stephen Strasburg, Boras was able to leverage the relationship on decisions made with the heart, which often happens once owners sit down at the negotiating table. Boras still has speedy center fielder Michael Bourn and righty starter Kyle Lohse dangling out there, seemingly with a lack of obvious suitors. But given his history of creating one-team bidding wars, another couple of surprises may well await.