One of the most tiresome tropes beloved of the D.C. set is “wagging the dog” — the idea that a politician does something spectacular and marginally wrong to distract attention from the fact he is, say, selling Long Island to the Somali pirates to use as a new base of operations. Most legislators in my experience are nowhere near that Machiavellian and, anyway, a great number of them are fully capable of simultaneously making small noisy mistakes and big covert mistakes without ever having planned to do so. Screwing things up never has been a zero-sum game.

However, were I of that conspiratorial mind-set, I might wonder about the relationship of the preposterously prolonged investigation into how well inflated the footballs were in last year’s AFC Championship Game to the ongoing crisis surrounding how central the destruction of the human body is to the game of professional football. In truth, the thing with the footballs should have been settled by Valentine’s Day. Make your case. Drop a minor fine. Get on with your lives. Instead, we have had six months now in which the mere rhetoric expended on the entire affair has tested the limits of the ideal gas law. Meanwhile, over on the human destruction front, things are continuing apace.

Point the First: On July 6, a federal judge approved a settlement reached between the NFL and more than 4,500 of its former players, many of whom say their brains were completely or partially demolished as a result of playing football. This lifted a cap on damages on which the league previously had insisted, and it guaranteed that the more desperate cases would get their money as quickly as possible.

Point the Second: When former Oakland Raiders quarterback Kenny Stabler died on July 8, his family donated his brain and his spinal column to Boston University’s Chronic Traumatic Encephalopathy Center, one of the research institutions that has pioneered the study of how football destroys the minds of the people who play it.

Point the Third: Denver defensive back Champ Bailey, as sure a Hall of Fame lock as there is, went out of his way to call for the retirement of former teammate Wes Welker, a gifted and reckless wide receiver who has suffered untold concussions during his decade in the NFL, including three during a nine-month stretch beginning in 2013. This is something that almost never happens — one player suggesting that another player leave the game before his wires get completely crossed — and it is a clear indication of how deeply the crisis has penetrated the bubble within which football players generally exist.

Point the Fourth: On July 24, the online scientific journal PLOS ONE published a spectacular correction of a paper it had published that purports to debunk the link between contact sports and degenerative brain disease. The study lists as its first author one Dr. Joseph Maroon, a Pittsburgh neurosurgeon. It turns out that Maroon was rather thick with conflicts of interest.

The University of Pittsburgh Medical Center has received grants from the National Football League and the Pittsburgh Steelers. Dr. Joseph Maroon is an unpaid consultant for the Pittsburgh Steelers football club. He has been the team neurosurgeon for the Pittsburgh Steelers since 1981 and the medical director for World Wrestling Entertainment Corporation since 2008 for the management of spine and brain-related injury. He also has served on the National Football League’s Head, Neck and Spine Committee since 2007 and is currently a consultant to the committee. Dr. Maroon is a founder and shareholder in ImPACT (Immediate Post Concussion Assessment and Cognitive Testing), and the WWE has partnered with ImPACT to provide concussion management. Dr. Maroon has served as an expert witness in medical legal cases involving concussions. This does not alter the authors’ adherence to PLOS ONE policies on sharing data and materials.

Oh, OK. Anything else we should have known before reading Dr. Maroon’s paper? Why, yes, there certainly is. We’ll footnote the text here, since it’s pretty substantial. But suffice to say it’s not pretty.1 Again, were I of a conspiratorial mind-set, I might think that the NFL has assigned to its pet doctors the job of undermining the growing evidence that its game depends vitally on the destruction of the brains and bodies of its employees.

“In addition, the authors would like to correct statements in the published article and provide additional clarification regarding the searches underlying the systematic review:

“Figure 1 indicates that the authors conducted a meta-analysis on 40 studies, which is incorrect. The text in the last box of the flow chart should read ’40 studies included in quantitative analysis.’ For the qualitative analysis of 58 studies, the authors gathered information on observed pathology, associated symptoms and suspected risk factors of chronic traumatic encephalopathy (CTE). The 18 qualitative studies that were excluded from the quantitative analysis did not present any pathologically confirmed case reports of CTE.

“The following statement in the third paragraph of the Discussion section is incorrect: ‘This is also true for athletes of contact sports with risk for head impact but with no confirmed CTE cases to date, such as rugby or soccer players.’ There are both rugby and soccer players included in the authors’ dataset of pathologically confirmed cases of CTE (Table S1).”

And, finally, there is this business with the family of Junior Seau, whose mind was so destroyed by football that he killed himself. The NFL manages to split the difference between being cruel and being inhumane by being both at the same time. The league continues to amaze. 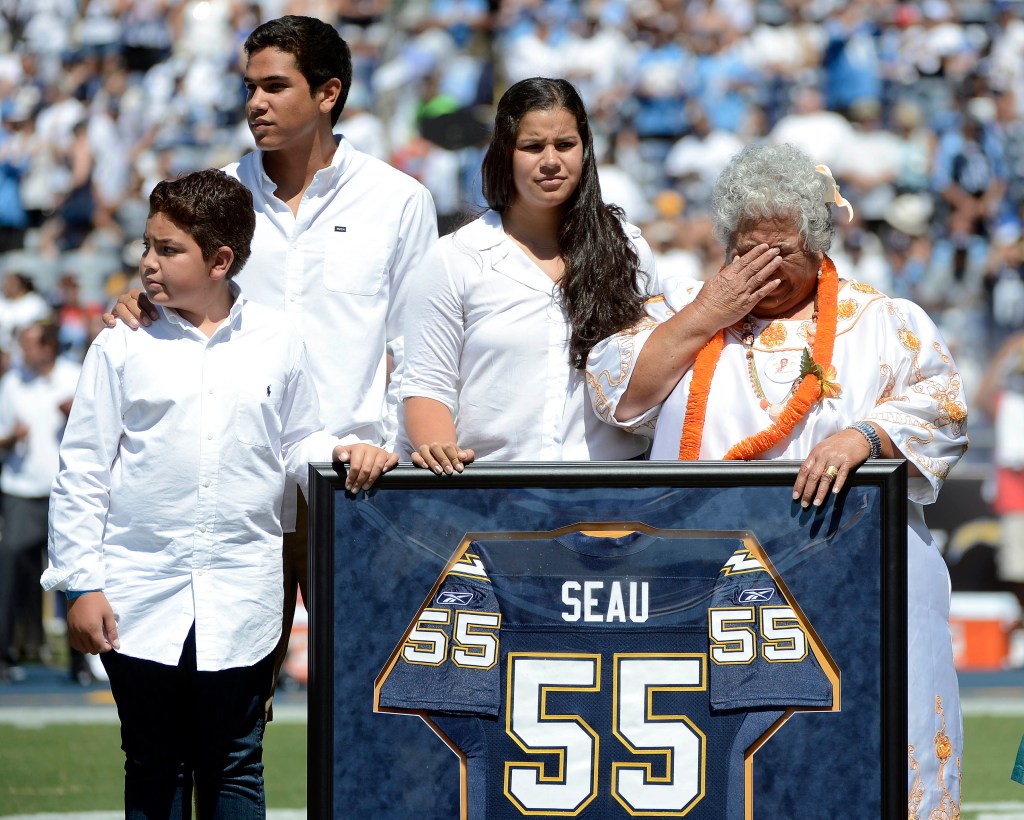 The sad end to Seau’s life already is a pivotal episode in the epidemiological history of this massive health crisis. In 2012, Seau put a shotgun to his chest and pulled the trigger, killing himself in such a way, apparently, as to preserve his brain for postmortem research. The doctors studying it concluded that Seau was suffering from a severe case of CTE. In 2013, his family filed a wrongful death suit against the NFL. Next month, Seau will be inducted into the Pro Football Hall of Fame in Canton, Ohio. (The people who run the Hall of Fame will exhaust their last breaths telling you that it is a separate entity from the league it so glorifies. But you likely are not 8 years old, so you needn’t believe that horse hockey.) Anyway, it was widely assumed that members of the Seau family — most notably, his daughter Sydney — would speak at the ceremony on Seau’s behalf. It therefore was widely thought that the NFL and the Hall of Fame both had hearts and both had consciences. This should never be assumed when discussing either entity.

Last week, the Hall announced that nobody would be speaking about Seau during the induction ceremonies. The panjandrums in Canton cited a six-year-old policy banning induction speeches on behalf of deceased players. Instead, there will be a video celebrating Seau’s career. Sydney Seau will appear in the video. When it comes to simple human decency, both the Hall of Fame and the NFL would screw up a two-car funeral if you spotted them the hearse.

Why not have speeches on behalf of deceased players? What is the possible harm in that, other than the fact the ceremony will run long? Were I a suspicious fellow, I might speculate that the NFL knew damn good and well its employees were going to start dying young and that they would be visited by early death due to the damage inherent in the game, so the league called the Hall and suggested the induction of dead players be downplayed. Or, as Hall president David Baker put it last week, saying far more than he thought he was saying: “Our mission is to honor the heroes of the game and Junior is a hero of the game. We’re going to celebrate his life, not the death and other issues.”

It is an offense against decency and against history to soft-peddle how that life ended, and to soft-peddle the “issues” that led Seau to kill himself. Let his daughter celebrate his life, but let her also acknowledge and mourn his death if she wishes to do so — because Junior Seau quite literally gave his life to football. His family knows it. The league knows it. Every football fan in America knows it. Every other Hall of Famer who will be on the dais knows it, and the ones still healthy know how lucky they have been so far and likely wonder how long their luck will hold out. Professional football has an ongoing existential crisis, and it has nothing to do with how much air there was in a football one cold night in January. Professional football still dares not look at this crisis squarely and honestly. It is blind to the circumstances of the dead and deaf to the pleas of the living. I do not suspect the NFL of wagging the dog, but, on this issue, it continues to screw the pooch rather spectacularly.