Ahh, boxing. There were significant fights this weekend — well, whatever passes for “significant” in this sucking chest wound of a year in the sport. Light heavyweight belt holder Sergey Kovalev knocked out a bald orc from Australia named Blake Caparello. The result was perfunctory and boring, but at least it set up a real fight in November: Kovalev versus 49-year-old legend Bernard Hopkins, who holds two 175-pound titles and might still be skilled enough to stink out a win against the rising Russian slugger. Brandon Rios showed once again that he is a punching bag (FYI, he hates to be called that), albeit a durable one, in his disqualification victory over Argentine tattoo model Diego Chaves. (It was the second questionable non-TKO stoppage victory for one of trainer Robert Garcia’s fighters in just a tad over two months, the other being Nonito Donaire’s conveniently timed technical decision over Simpiwe Vetyeka on May 31. Can anybody say “trainer of the year”?) And light welterweight titlist Jessie Vargas won another debatable decision in his hometown of Las Vegas — can someone figure out a way to feed him to Lucas Matthysse and put us out of this misery?

What does it all mean? That boxing sucks so bad in 2014 that the Internet cares more about Shannon Briggs eating Wladimir Klitschko’s pasta than anything that actually happened in the sport this weekend. Here’s video:

Believe it or not, that’s not the only insane thing Briggs, a washed-up 42-year-old heavyweight, did to Klitschko, the legitimate heavyweight champion, this week. He also showed up at Klitschko’s gym to act a fool while Klitschko prepared for his September 6 title defense against Kubrat Pulev.

And he previously showed up to scream and eat a cherry pie at the weigh-in for Klitschko’s April fight against Alex Leapai.

And before that, he barged in on Klitschko in training, threw a boxing boot at him, and got the Ukrainian champ to say, “I will make you eat this shoe!” in a Borat voice.

So what is going on here? Briggs, who at 42 looks more muscular than he was in his fighting prime, might just be ’roid raging. It’s becoming more and more the norm for boxers over the age of 38 to be in the best shape of their lives.

Or perhaps Briggs has always been a lunatic. He is, after all, the guy who explains, “I get paid to knock people out” during an interlude at the end of Track 7 of the Fugees’ Grammy-winning album The Score.

Or he’s trying to bait his way into a fight with Klitschko, a world-class opponent who would bring millions of euros into a fight with any opponent, even a fortysomething heavyweight who got beaten to a bloody pulp by Klitschko’s older brother, Vitali, in 2010. My advice: Pray that Wladimir is not in on this charade, and that he’s not helping Briggs build demand for a fight between them later this year or early next year or any time in the future. Briggs is not considered a top-10 heavyweight contender by the Transnational Boxing Ranking Board. He has fought four times this year, always against journeymen, bums, and low-level gatekeepers in the division, in locales like the Tampa DoubleTree and the Mountaineer Casino in West Virginia. 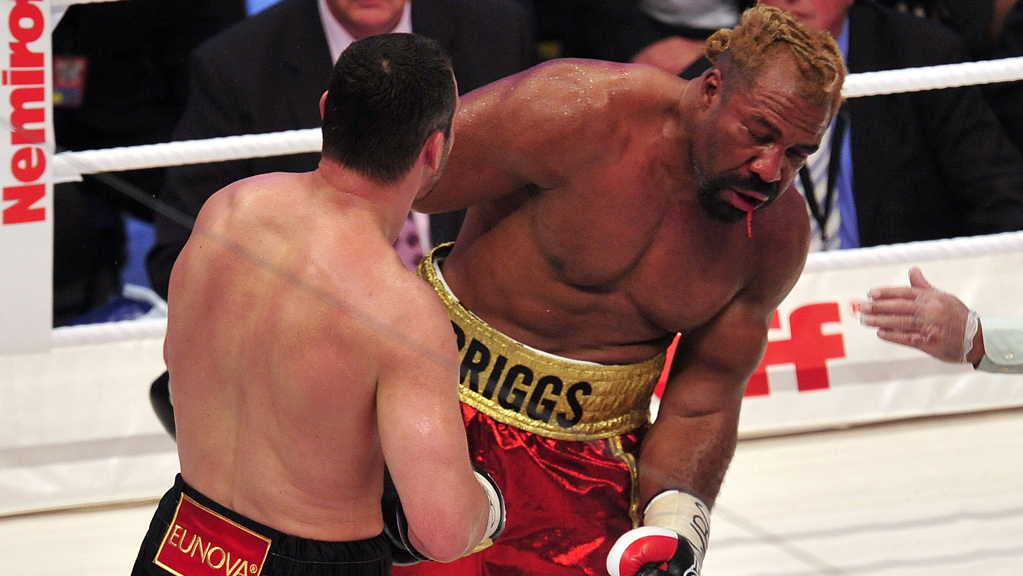