No one would have blinked had Robert Quinn been named last season’s Defensive Player of the Year. It wouldn’t be fair to call Quinn’s 2013 a breakout. He had 10.5 sacks the season before, his second year in the league. But what Quinn did in Year 3 brought him to an entirely different plane. He lost out on the sack title — 19 to Robert Mathis’s 19.5 — but did earn the title of being the league’s best pass-rusher.

According to the Football Outsiders Almanac, Quinn finished second in both quarterback hits and hurries while also drawing a league-leading seven holding penalties on pass plays. If we count those holds as half a sack each — and some teams do — that brings Quinn to 22.5, which would tie the single-season record. His terrorizing of quarterbacks and left tackles was happening at a historic level.

And that’s what makes the start of this season so strange. Through five games, Quinn has exactly zero sacks. It’s not as if his teammates are beating him to the quarterback, either. The Rams have gotten a sack on 0.7 percent of opponents’ dropbacks — the lowest figure in the league by more than two percentage points. Last year, no team in football finished at less than 5 percent. The drop-off is even more staggering when you consider that the Rams had the third-highest sack rate last season, at 8.9 percent. They’ve gone from one of the best pass-rushing teams to the worst.

They aren’t alone, either. The Seahawks had maybe the league’s best pass rush a season ago — fifth in sack rate, first in percentage of opponent dropbacks with pressure. This season, those have dropped to 25th and 32nd, respectively. The Panthers have gone from first in sack rate all the way to 16th. 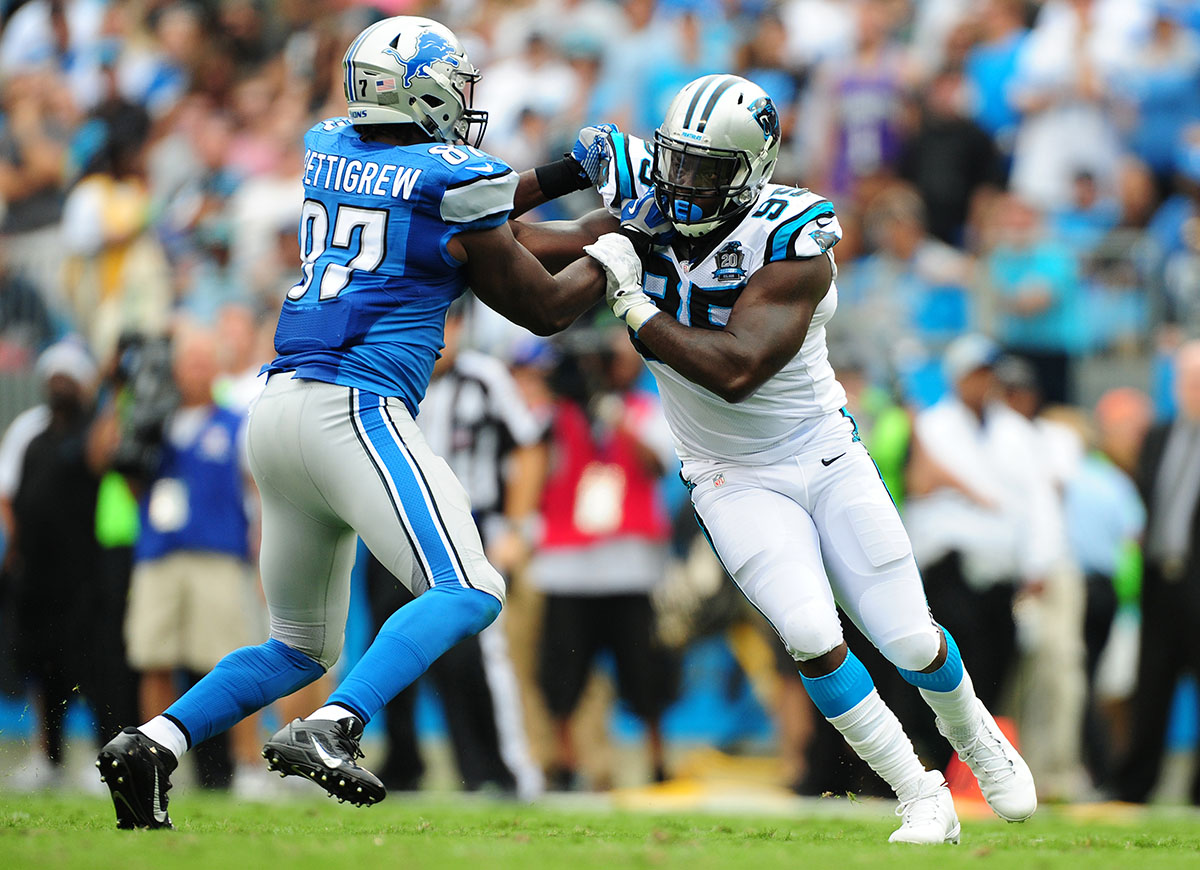 For a team like Carolina, the explanation is pretty simple. The Panthers are without the deactivated Greg Hardy, and right defensive end Charles Johnson is having a notably bad year. Carolina now has nowhere near the best defensive end pairing in the league that it did a year ago.

The Cardinals are facing a similar problem. Arizona’s pressure rate was fifth last year (28.1 percent of dropbacks). This season, it has dropped to 28th. That makes sense considering the losses it has had up front. John Abraham, the team’s best pass-rusher last year, retired and Darnell Dockett isn’t around to push the pocket after an ACL injury, so the Arizona pass rush has completely fallen off. That’s despite being the most blitz-happy team in the league. No one brings five or more rushers more often than the Cardinals, and considering how little they get from it, it’s reasonable to say they have the least scary pass rush in the league.

The Rams aren’t far behind, though. St. Louis brings five or more rushers on 44.1 percent of dropbacks, second in the league, and they still can’t get to the quarterback. Their pass-rush woes have been linked to Quinn’s, but they start with the injury absence of Chris Long. The makings of a great pass rush involve a defensive front attacking from different angles. Through five weeks, the Lions have the best sack rate in football (8.6 percent). Ezekiel Ansah had an amazing Week 6, but for the most part, the real threats on the Detroit defensive line are on the interior. With tackles crushing the pocket and not leaving any escape routes for quarterbacks, it makes life easier for all of their edge rushers. Teams can scheme for one pass-rusher. They can’t scheme for three.

That’s the problem Quinn has faced so far. Offenses were going to design protections specifically to slow him down after a 19-sack season, and without other threats along the defensive line, they’ve been able to do it. In Week 1, the Vikings had three plays in which Matt Asiata’s sole job was to move to Quinn’s side and hold him off while the rest of the line slid right. Using a running back to help with a great pass-rusher is an old tactic, but some of the factors slowing Quinn down are also more specific to his situation.

Offensive tackles have two primary elements to worry about in pass protection: speed and power. Quinn’s greatest asset is his ability to blow by a left tackle to the outside and use those ridiculously long arms to rip right by. Cameron Wake may be the only guy faster off the ball. To combat that, left tackles take massive first steps to the outside, hoping to cut Quinn off at the start. At a certain point, speed only matters so much if a tackle is doing everything he can to account for it. Great pass-rushers have a way of taking advantage of this, and it’s by transferring that speed into power.

Because that big first step to the outside usually leaves tackles with less of a base, if someone like Quinn quickly changes course and decides to go through a tackle rather than around him, he has an advantage. That’s exactly what’s happening here. Quinn puts his foot in the ground and drives Anthony Collins back toward the quarterback. Most power moves are finished off by a quick step back inside to finish off the sack, but that doesn’t happen here. It doesn’t because Michael Brockers gets knocked back so far by Logan Mankins’s initial punch that Mankins is able to help against Quinn at the last second, right before he can hammer Josh McCown.

This type of thing pops up over and over on St. Louis film. Without a threat on the interior, teams can focus all of their attention on Quinn. The inside moves available to him are taken away because there always seems to be a guard waiting as he steps or spins back inside. One solution to that problem would be more Aaron Donald. He played 61 of the Rams’ 69 snaps on Monday night, the first time he’s topped 50 percent. Against a team other than the 49ers, that may be enough to free Quinn up to wreak some havoc. Even last year, two of Quinn’s worst games came against Niners left tackle Joe Staley, who seems to have his number.

Quinn was blanked in those two games and also against Dallas, where he had to deal with Tyron Smith. It was against lesser left tackles that Quinn did a lot of his damage, and he has still shown he can do just that when put in the right situation. On plays when a tackle doesn’t have help to the inside and Quinn goes with a power move, he’s almost impossible to stop. He gets held constantly, which is what’s going on here against Matt Kalil. Quinn didn’t suddenly drop off the face of the earth. He’s still the same guy he was. He just needs a little help.

The same goes for the two outside rushers in Seattle. Chris Clemons was a staple there for years, but by the end of last season, Cliff Avril and Michael Bennett were the Seahawks’ two best pass-rushers. Both are still a pain in the ass. Bennett’s huge offseason payday hasn’t slowed him down, and Avril is still a speed-rushing nightmare. Yet the Seahawks’ pass rush has fallen off a cliff. The issue is that without a threat on the inside, quarterbacks are free to move about the pocket as they please.

Philip Rivers was the most painful example. He dominated the typically stingy Seahawks defense. Few quarterbacks subtly navigate the pocket better than Rivers. Here, Bennett actually beats right tackle D.J. Fluker to the edge, but as Rivers feels the rush, he moves slightly to his left while also stepping up and getting off a clean throw to Eddie Royal.

This is a theme on Seattle’s film all season — Bennett and Avril manhandling tackles on the outside, quarterbacks calmly stepping up and getting off comfortable throws.

Last year, that wasn’t happening, and the change isn’t all that difficult to figure out. In passing situations a year ago, the Seahawks were able to trot out a defensive front with Clemons and Avril on the outside and with Bennett and Clinton McDonald playing defensive tackle. McDonald was an underrated interior pass-rusher who regularly took advantage of mismatched guards. His replacements — Jordan Hill and Kevin Williams — haven’t been the same type of interior force when given the chance. The same goes for the stable of guys used to replace Clemons. The Seahawks are still moving Bennett inside to tackle and should be, but they’re failing to find a second edge rusher to get after quarterbacks who can’t step up in the pockets Bennett is collapsing. Whether it’s O’Brien Schofield or Cassius Marsh, no one is getting much done on the outside. 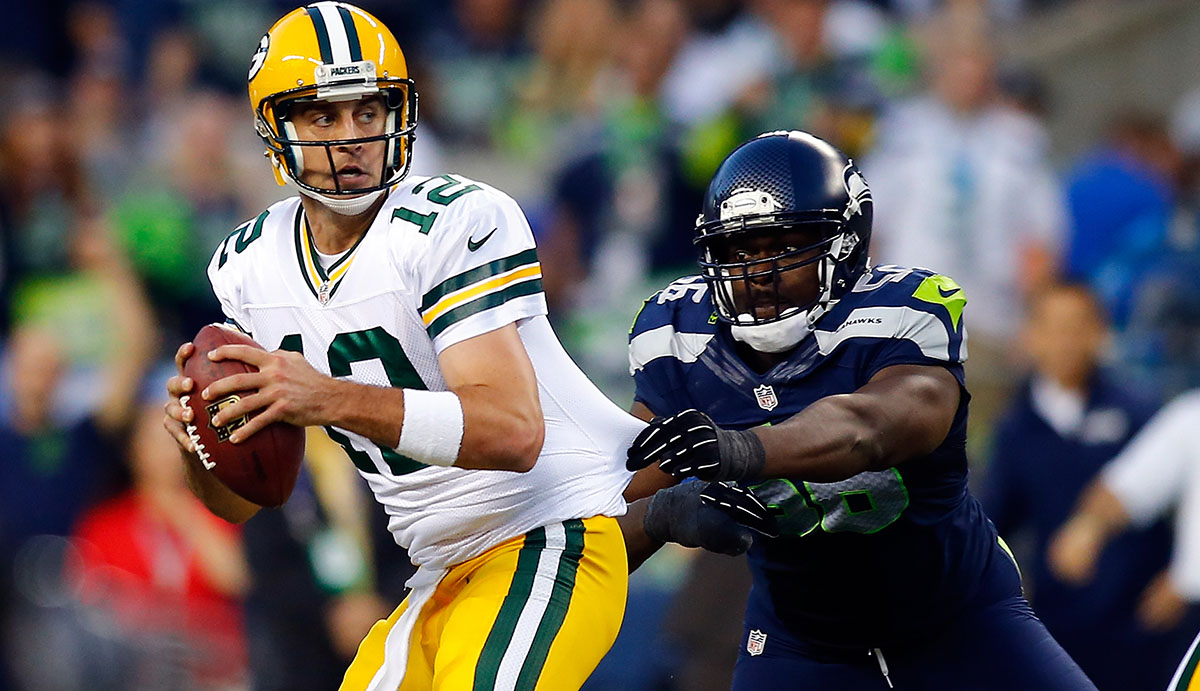 The lack of interior pass rushing is only made worse by how Seattle plays up front. The Seahawks have a ton of different looks and multiple packages. On first down, that often means both Brandon Mebane and Tony McDaniel inside. Those looks make some sense, considering teams are still running about half the time on first down (compared to 39 percent of all plays), but it leaves Seattle with almost no chance to generate any pass rush up the middle. The Seahawks are getting pressure on just 11.8 percent of first-down dropbacks — 31st in the league.

On third down, with their nickel group on the field, their pressure rate jumps to 25th. That isn’t good when you consider what sort of pass rush the Seahawks had a year ago, but it shows that with the right personnel, they can still occasionally make quarterbacks uncomfortable.

All of that seems complicated, but for both the Seahawks and Rams, the fundamental problem is actually pretty simple. Both have lost some of the supporting players who gave them the pass rush they had a year ago. Sacks and pressure might seem like the work of stars doing what they do, but a pass rush is a collective — take one piece out and the whole thing suffers. The stars are left for both teams, but they’ve lost what allowed those players to become stars in the first place.