Here are a couple things you may already know: The San Antonio Spurs rest their aging core of starters fairly regularly throughout the regular season; last year’s Spurs came within seconds of winning the NBA championship; at various times in the playoffs the Spurs relied on big games from bench players like DeJuan Blair (13 points and seven rebounds in Game 3 of the first round), Manu Ginobili (16 points, seven rebounds, and 11 assists in Game 1 of the conference semis), and Gary Neal (24 points in Game 3 of the Finals).

It’s also true that rotations shorten in the playoffs, but that doesn’t mean the reserves aren’t important — in fact, their ability to get into the flow of the game becomes even more crucial. Resting the starters is primarily seen as a way for the Spurs to preserve them, but it’s also a way for head coach Gregg Popovich to prepare the bench.

Not that he was interested in talking about that after getting blown away by a lottery-bound Minnesota Timberwolves squad last night, 110-91. “They forced us to lay an egg,” he said. “We were awful.” Ricky Rubio? “He was great.” Late-blooming rookie phenom Gorgui Dieng? “I thought he worked hard.” His postgame remarks were 54 seconds long at most, but it’s hard not to wonder if the terseness masked a certain satisfaction. He’d likely prefer his team to go into the postseason a little beat-up rather than still riding the winning streak the Thunder snapped at 19 games. It’s a part of the seasoning process.

Boris Diaw was more willing to entertain the idea that heavy minutes for the bench specifically prepares them for the playoffs. “It gives a lot of responsibilities to other guys so everybody on our team is ready to step up to play in the playoffs if they need to.”

There’s lineup data to back that up. So far, the Spurs have played their nominal starting lineup of Tony Parker, Danny Green, Kawhi Leonard, Tim Duncan, and Tiago Splitter just 262 minutes, the lowest total of any current playoff team. The next highest minutes total for a starting lineup is 284 for the Brooklyn Nets, and they’ve struggled with injuries to key players like Kevin Garnett and Andrei Kirilenko throughout the season. Below the Spurs are teams like the Cavaliers, Magic, and Lakers. At the other end of the spectrum are the Pacers and the Blazers, who have played their starters 1,432 and 1,307 minutes, respectively. (Apparently, even the Pacers themselves are a bit concerned about those big minutes, with Frank Vogel saying he’ll rest his starters over the final games of the season. Yet more evidence that Indiana’s season is starting to look like a sleepover that’s gone on too long.) Somewhere in the middle are teams like the Thunder and the Heat, with 540 and 429 minutes for their most-used lineups, respectively.

But that only tells us that the Spurs are the most successful team with the lowest total playing time for their most-used lineup. It gets more interesting when you look at the net ratings of the next most-used lineups for the top seeds in each conference.

Net rating is the difference between the points a lineup scores and the points it gives up per 100 possessions, essentially smoothing out differences in pace to give a rough yardstick of how effective a given lineup is. Looking at the net ratings of the second through 10th most-used lineups for a team should give you a good idea of how effective its entire second unit is. The 10th most-used lineup for the Spurs, for example, is Patty Mills, Marco Belinelli, Manu Ginobili, Boris Diaw, and Tiago Splitter. For the Thunder, it’s Russell Westbrook, Andre Roberson, Kevin Durant, Serge Ibaka, and Steven Adams. (It’s also worth noting that Durant is in eight of the 10 most-used Thunder lineups — that guy does a lot of heavy lifting.) 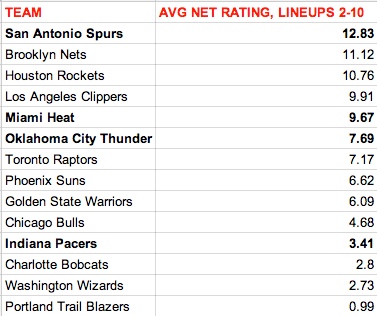 The second through 10th most-used lineups for the Thunder have a solid average net rating of 7.7, likely because of the need to shift in a lot of bench players because of injuries to Westbrook and others. For the Heat, that average net rating is 9.7; for the increasingly woeful Pacers, it’s just 3.4.

For the Spurs, it’s 12.8. That number, as an average, is likely skewed by small sample size, but the tenth most-used lineup for the majority of teams has still seen between 40 and 60 minutes on the floor. For the Spurs, those nine lineups have totaled 904 minutes of floor time, as opposed to 783 minutes for those same Pacers lineups. Looking at these net ratings doesn’t provide an exact measurement of the strength of each team’s bench, but it does point toward how different teams approach their reserves, whether by design or circumstance.

Of course, a strong bench doesn’t necessarily augur success in the postseason — with the aforementioned shortened rotations, it’s entirely possible that many games will be played with little contribution from anyone but the starters. But if someone goes down — likely a greater risk for an older team like the Spurs — or if the matchup demands it, it helps to have reserves who have been prepped for it by consistent minutes and responsibility during the regular season.

“They get that confidence when guys are sitting,” said Kawhi Leonard. “They know what they can do on the floor. It just boosts their confidence and they’re ready: They can play the game.”