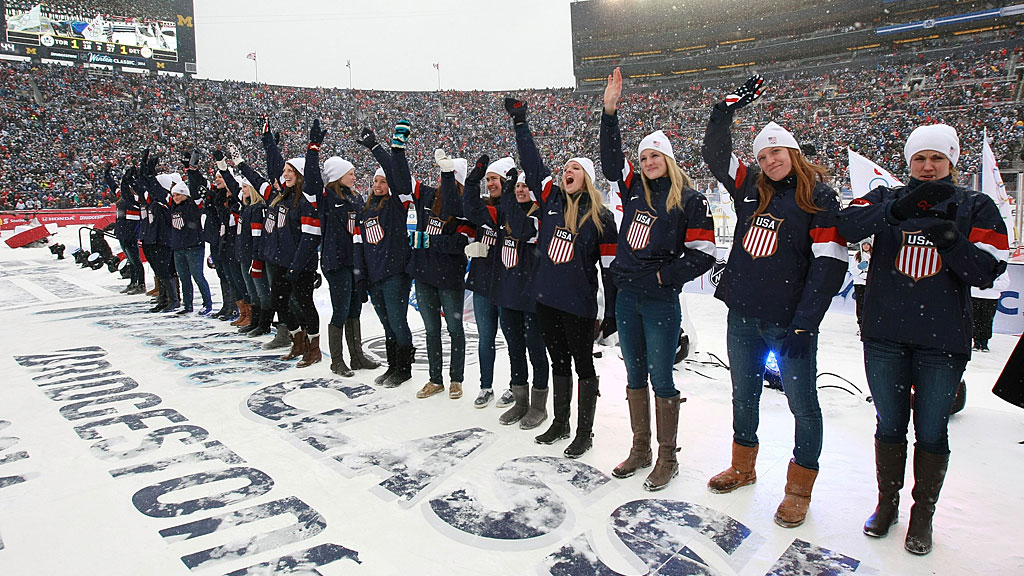 Imagine if the Stanley Cup or the World Series or the Super Bowl was only played once every four years. No playoffs, no best-of-seven. Just one game, winner-take-all, and then it’s over.

Now imagine that we already knew, with virtual certainty, which teams would be in that game. Those two teams could spend four years training, practicing, perfecting their rosters and strategies, and playing each other all over the world in preparation for that one game that would decide everything. Four long years, just to get to 60 short minutes that would settle everything.

Oh, and did we mention that the two teams seem to hate each other?

We’re two weeks away from watching that game. Welcome to Canada vs. the USA, and the world of women’s Olympic hockey. 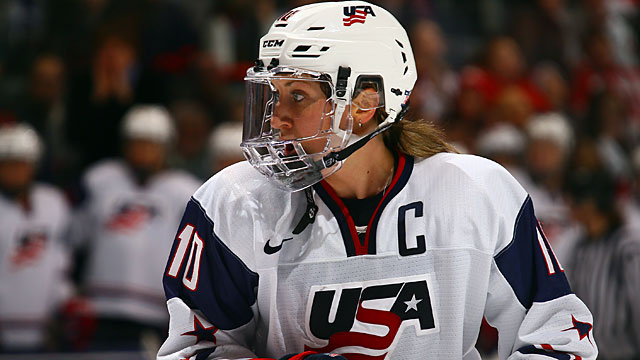 Yes, that’s a stupefyingly obvious thing to point out, but some people still seem to have trouble with it. Despite the overwhelming similarities to men’s hockey, there are some key differences. Bodychecking is illegal. The skating is noticeably slower. You won’t see any 100 mph slap shots. Players with long hair have actual long hair, not ratty mullets.

Two things can be slightly different and still both be fun. You can live with that, right? Good, because the tournament starts Saturday. Let’s get to the good stuff.

A Brief History of the U.S.-Canada Rivalry 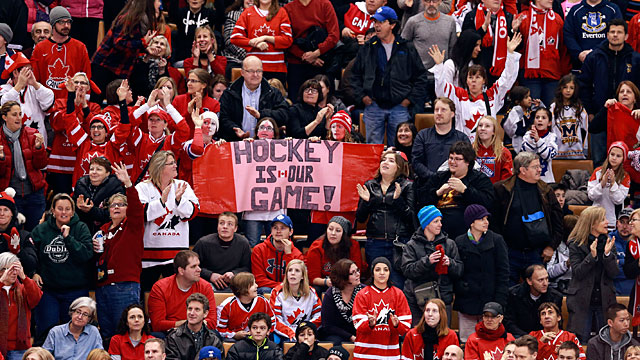 Women have been playing organized hockey in North America since the 19th century, with the first game reportedly played in Ottawa in the 1890s. But we didn’t get an internationally sanctioned tournament until 1990, with the inaugural IIHF World Women’s Championship. Canada and the U.S. met in the gold-medal game, with Canada winning 5-2. They met in the next two championships as well, in 1992 and 1994, both of which were won by Canada by a combined score of 14-3. But the U.S. started quickly closing the gap, and the 1997 final was closer; Canada needed overtime to win 4-3.

The sport debuted at the Nagano Olympics in 1998, where Team USA won gold by finally beating Canada in what was considered an upset. Canada won the next five major tournaments, including the 2002 Olympics, before the U.S. reclaimed the world title in 2005. Since then, the U.S. has won four of six world championships, while Canada won gold at both the 2006 and 2010 Olympics.

If you’re counting, that’s 19 consecutive major tournaments that have been won by either Canada or the U.S., with the two teams facing each other in 18 of those finals. (The one exception: The 2006 Olympics, when Sweden shocked the U.S. in a shootout during the semifinal.) The two teams also play each other in occasional secondary tournaments and tune-up games, including seven games at the end of last year, which saw Canada win the first three before the U.S. finished with four consecutive wins.

Those Two Teams Really Don’t Seem to Like Each Other 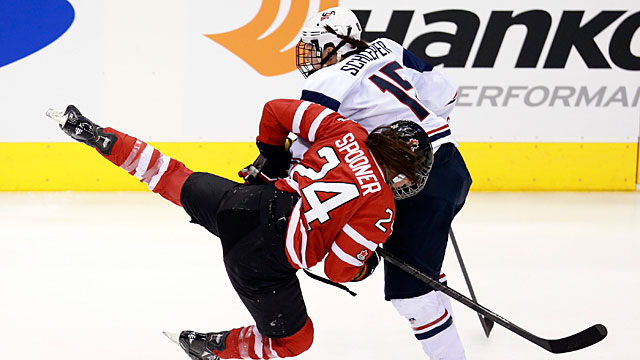 That’s not hyperbole. There’s legitimate bad blood between the two programs, as demonstrated during this wild scrum that broke out at the end of a tune-up match in December (and that wasn’t even the first time). And as for that whole “no bodychecking” part of the rulebook, let’s just say that women’s hockey isn’t exactly a noncontact sport.

And when these two teams aren’t targeting each other on the ice, they’re doing it through the media. In 2002, Team Canada players accused the Americans of using a Canadian flag as a dressing room floormat. The outrageous act of disrespect served as motivation during Canada’s 3-2 win in the gold-medal game, fanning the flames of the rivalry in the process. That the whole thing turned out not to be true was just a minor overlooked detail.

Right now, you could make a strong case that Canada vs. the U.S. is the best rivalry in hockey, period. Men or women, international or NHL. And again, it’s all been building toward what will almost certainly be a one-game gold-medal showdown.

Wait, What About the Other Teams? 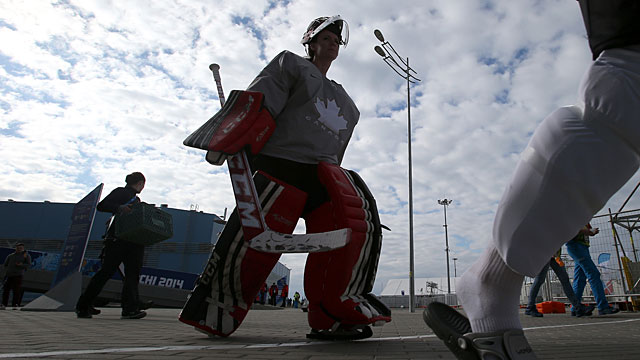 Oh right, the other teams. There are six of them — Finland, Switzerland, Russia, Sweden, Germany, and Japan. But they’re almost certainly competing in a six-way battle for bronze.

Some background: When women’s hockey made its Olympic debut in 1998, it was understood that Canada and the U.S. would dominate. The two countries were the only ones with full-fledged development programs, and had typically run up lopsided scores when facing any other countries. The rest of the world had a lot of ground to make up, but it was assumed the sport’s inclusion in the Olympics and resulting higher international profile would nudge that process along.

It’s been 16 years since Nagano, and it’s fair to say that progress has been slow. Russia is finally improving, Finland has emerged as a regular bronze-medal threat, and Switzerland won its first world championship medal when it finished third in 2012.

But while other nations have closed the gap somewhat, Canada and the U.S. are still dominant. And the lopsided blowouts have continued to pile up, with the two North American powerhouses combining to outscore their opponents 72-3 during the three-game preliminary round in 2010.

That’s a problem for the women’s game, and it has led to the possibility that the sport could be removed from the Olympics until it becomes more competitive. That threat seems to have passed, at least for now, but a better tournament would be a very good thing for the sport’s future.

That competitive balance has also led to an important change for this year.

This Year’s Tournament Format Is All Screwed Up, and That’s Good 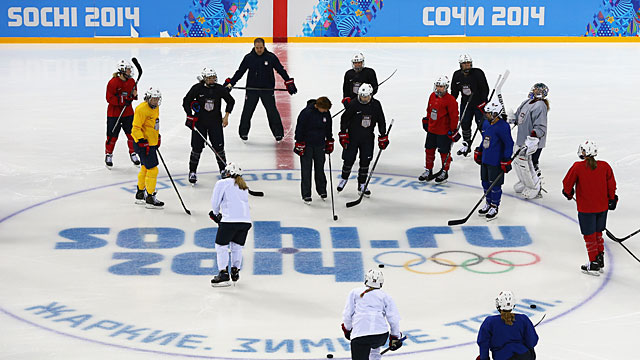 As in previous Olympics, the tournament will feature eight teams divided into Group A and Group B. Each team plays one game each against the other countries in its group, and those standings are used to determine the seedings for the playoff round.

That’s all pretty standard for international hockey. The twist is that this year, the two groups aren’t balanced — instead, the top four nations have been placed in Group A, with the next four in Group B.

That sounds like it would be unfair to the top teams. But it’s not, because the groups are treated differently in terms of the elimination round. All four Group A teams are guaranteed a spot in the playoffs, with the top two teams getting a bye to the semifinals. The other two Group A teams will get a spot in the quarterfinals, where they’ll play the top two teams from Group B.

Barring a major upset, those top two Group A teams will be Canada and the U.S., so they’ll go straight to the semifinals and be one game away from meeting in the gold-medal game. But the format change, which was borrowed from the 2012 and 2013 world championships, guarantees that the two teams will also meet once in the round robin.

That’s a key change, for two reasons. For one, we’ll get an extra Canada-U.S. game, which is great. But more importantly, it removes the need for Canada and the U.S. to rely on goal differential to determine the top seed. That means they won’t need to run up the score on the weaker nations during the round robin, the way they have in the past, leading to fewer blowouts.

The format change is an acknowledgment by the International Ice Hockey Federation that this is still a lopsided playing field, which is the smart move. The tournament will be better for it.

Will it be more competitive? That’s another story. Another Canada-U.S. final isn’t quite a sure thing. After all, this is hockey — mix in a hot goaltender and some puck luck, and you never know in a single-elimination tournament. But it would take an extraordinary upset. (If you’re looking for the most likely candidate to deliver one: Finland, which has one of the best goalies in the world in Noora Raty and beat the U.S. in November.)

So we shouldn’t say it’s definitely going to be a Canada-U.S. final. But it will.

Some Names to Know 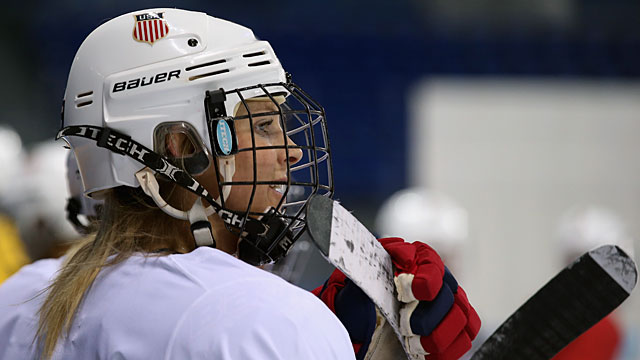 With the tournament starting soon and just 14 days to go before the gold-medal showdown, here are 14 names you’ll want to get familiar with.

Katey Stone, coach (USA)
The Americans are led by the veteran Harvard coach, who holds the mark as the winningest coach in women’s college hockey history. Also, she’s the only female coach in the tournament.

Kevin Dineen, coach (Canada)
Dineen was in his third year as coach of the Florida Panthers when he was fired in November. While Stone has been behind the U.S. bench for years, Dineen was only named to the Team Canada job seven weeks ago.

Amanda Kessel, forward (USA)
You may know her as Maple Leafs star Phil Kessel’s sister. In a few weeks, you may know him as Amanda’s brother. In either case, she’s a Kessel, so it goes without saying that she’s awesome. While playing for the Minnesota Golden Gophers, she was named College Player of the Year in 2013. She’s coming off surgery but says she’s 100 percent now.

Hayley Wickenheiser, forward (Canada)
Arguably the greatest women’s player of all time, Wickenheiser has been a Team Canada mainstay for 20 years. She already owns three gold medals, to go with tournament MVP awards in 2002 and 2006 and the all-time record for Olympic goals scored. She’s played in a professional men’s league in Europe, and in 2000 she competed in the Summer Olympics as part of Canada’s softball team. She was a playable character in NHL 13. Other than that, she hasn’t accomplished all that much.

Alex Carpenter, forward (USA)
The Boston College star (and daughter of Bobby Carpenter, the first American player to score 50 goals in the NHL) spent three years with the Under-18 team, winning best forward in 2011. She was part of last year’s world championship team and is making her Olympic debut.

Caroline Ouellette, forward (Canada)
The Canadian captain has played in every Olympics women’s tournament. Between the Olympics and world championships, she’ll be looking for her 10th career gold medal.

Jessie Vetter, goalie (USA)
She was the starter at the 2010 Games, and is a good bet to play a prominent role this year (though Stone has not yet officially named a starter). In 2011, she made 51 saves to beat Canada in the world championship’s gold-medal game. She has already made Olympic headlines after being forced to remove a quote from the Constitution from her mask.

Shannon Szabados, goalie (Canada)
Like Vetter, Szabados hasn’t yet been named starter. But she held the role in 2010, when she was named the tournament’s top goalie. She once nearly suited up for an NHL game as an emergency fill-in for the Edmonton Oilers, but has probably washed all their loser cooties off by now.

Meghan Duggan, forward (USA)
The Team USA captain is the all-time leading scorer at the University of Wisconsin, where she won a pair of NCAA titles. She was profiled by ESPN last week, and had this to say about Canada: “We don’t like each other, to say it in the best way possible.”

Catherine Ward, defense (Canada)
Ward is a three-time first-team All-Canadian who’s been part of the national team since 2009, including the 2010 gold-medal squad. Worth noting: On a young Canadian blue line, Ward is one of only two defenders who have any Olympic experience.

Monique and Jocelyne Lamoureux, forward (USA)
They’re identical twins, which is warm and fuzzy. They’re also usually the ones starting those brawls with Team Canada, which is not.

Julie Chu, forward (USA)
The oldest player on the roster and a national team regular since 2000, she owns five world championship gold medals and will be appearing in her fourth Olympics. She spent four years at Harvard and left the school as the NCAA’s all-time scoring leader.

Meghan Agosta-Marciano, forward (Canada)
Already playing in her third Olympics at the age of 26, she was named Best Forward and MVP of the 2010 Games. She was a first-team All-American for Mercyhurst College and broke Chu’s NCAA scoring record in 2011. She damn well knows how to celebrate a gold medal.