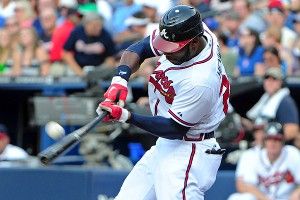 As we hurtle toward the second half of the season, it’s a pretty sure bet that you haven’t clinched your fantasy league. You’re either trailing or nursing a lead precarious enough to get blown up by a couple of injuries or a few prolonged slumps. With so much baseball still to be played and so many new stories yet to be written, fortune favors the bold.

It’s with that go-for-it spirit that we’re unveiling our second-half fantasy predictions. But not just any predictions. These are the out-on-a-limb, if-they-pay-off-for-you-you’ll-win-your-league kind of predictions. Doesn’t mean you should burn your team to the ground to trade for the best of this group, or sell any of the projected laggards at 20 cents on the dollar. But with the league on hiatus until Friday and no new stats coming in, there’s an opportunity to go long or sell short on these second-half movers. Here’s how we see a few of these guys shaking out.

He already had a big hot streak, which might make you wonder if another one is in store. After an ugly May, Heyward hit a blistering .343/.373/.680 from June 5 to July 5, whacking eight homers and 18 extra-base hits over that span. A rough 2011 soured some perceptions of Heyward’s future. But he’s 22 years old and had already shown extraordinary plate discipline in his rookie year, followed by a more aggressive approach and more power this season. His fly ball rate is also surging, going from 27.2 percent in 2010 to 33 percent in 2011 and 41.6 percent this year; turns out you need to put the ball in the air to hit it out of the park, so that’s a good thing.

Those skills are all going to come together sometime soon. We’re betting on now. As we wait for the second half to get started, Jason Heyward is a buy-high. Go ahead and buy high.

Mike Trout will end the season with more than 60 stolen bases.

Another buy-high, because Trout can’t possibly get more hype than he’s getting right now: Tuesday’s All-Star Game often felt like a three-and-a-half-hour promotion for Trout and Bryce Harper, with occasional thoughts on poor, downtrodden superstar Robinson Cano and the mean things those big meanies in Kansas City said about him. Still feels like there’s more waiting to happen. Trout might be the first player since Tim Raines to lead the league in stolen bases and still make you feel like he should run more; when you’re 26-for-29 in steals in your first exposure to the big leagues, that’ll happen. There’s no denying that Trout’s already a real-life and fantasy superstar, ranking third on ESPN’s fantasy baseball player rater (behind only Andrew McCutchen and Ryan Braun) despite not playing his first game this season until April 28. But Trout has a history of ridiculous steals totals in the recent past, having swiped 56 bags in just 131 games in 2010. His huge success rate, combined with his ability to read pitchers as he goes along, could inspire even more aggression on the base paths. Thirty-five-plus steals over the final 76 games of the season feels reachable for the Angels’ 20-year-old superstar.

Luke Gregerson will be a top-10 second-half reliever.

Mock Huston Street’s 24 innings pitched and subsequent All-Star selection all you like. Fact is, Street has been nearly untouchable when upright, striking out 12 batters per nine innings, with a 4-to-1 strikeout-to-walk rate and exactly zero home runs allowed. All of which threatens to make Street less valuable, not more, in the second half. The Padres are going nowhere this year. Street’s in the last guaranteed season of his three-year, $22.5 million contract (someone might pick up his $9 million option next year, but it probably won’t be San Diego). That makes him prime trade bait. And when you’re the closer for a team that plays in the most pitcher-friendly park in the league, there’s nowhere to go but down. If you’re a Street owner and you’re lucky, your guy will lock down a bunch more saves in the second half, but with some regression from that sparkling 1.13 first-half ERA. But it’s not hard to envision a scenario where a top team with an excellent closer trades for Street to be a lights-out setup man.

Wherever Street goes, if he does in fact go, Luke Gregerson figures to take over as Padres closer. He’d be a beast from day one. After a rough 2011 that saw his strikeout rate crater, Gregerson’s again fanning more than a batter per inning, wielding his trademark Slider of Death. His last 17 outings show what you get when he’s on his game: 16 innings pitched, 20 strikeouts, three walks, opponents hitting .193/.233/.333 against him. Unlike Heyward, Gregerson will cost next to nothing to acquire, even in deeper leagues. As a general strategy, targeting top setup men on teams likely to be sellers at the deadline makes a lot of sense. Of all those potential closers-to-be, Gregerson’s the one I like best.

Chris Sale will post an ERA over 3.75 in the second half.

Which would be a massive disappointment, given his microscopic 2.19 mark in the first half. But there are subtle signs of potential regression ahead. Sale’s home-run-per-flyball rate is a low 5.5 percent, fifth-lowest of any qualified pitcher. He’s stranding just under 80 percent of the base runners he puts on (league average is in the low 70s) and has yielded a low .255 batting average on balls in play (league average is a tick under .290). Not all pitchers are built the same, and you can’t just see a few aberrant numbers, snap your fingers, and make everything even out in the span of a couple weeks. But with Sale, everything has gone so far in his favor that, even acknowledging his filthy stuff, it strains credulity to expect a repeat performance of his first half.

And the biggest wild card is one that never seems to come up in his case, even though it dominates every Stephen Strasburg discussion: innings count. Sale was a relief pitcher from the first moment he played professional baseball, so he’s already blown well past his career high in innings, set last year with 71. Yet somehow you never hear anything about Sale’s projected second-half workload, and about how the White Sox might handle him if they too are in the race come Labor Day and face a Strasburgian decision with their young ace. Between the statistical markers and the potential for second-half fatigue, I see a competent second half for Sale, but hardly a great one. In this case, feel free to sell high.