Even great pass-rushers disappear for stretches. Double-digit sack totals are the mark of a respectable year, but even someone with those numbers might go half a season of games without one. The best edge players are the ones who are a constant problem even when they aren’t getting a sack. Robert Quinn may have lost out on the sack title last year (by half a sack to Robert Mathis), but no one in the league had more total pressures— and it wasn’t all that close. The best way to understand his game isn’t by watching him when things go right, it’s by watching when things go wrong.

Quinn had five games with at least two sacks, but the week I thought he caused the most destruction, he had only one. That would be Week 2 against the Falcons. Atlanta won, thanks to an early 21-0 lead, but I’m guessing it was one of the more painful victories Matt Ryan has ever experienced.

Quinn checks off every box for a rushing defensive end. He has long arms, good initial burst, and great balance — which often goes undervalued.

Balance is what allows Quinn to maintain his speed, dip his left shoulder a foot off the ground, and bend back toward the quarterback. That “rip,” as it’s called, is the first move pass-rushers learn. It’s the quickest, most efficient way of getting to the quarterback. The only difference between an incompletion and the perfect sack on the play above is less than half a second.

A lot of players can put that move together every so often. What sets Quinn apart is what he does if the rip move fails.

This is a play from earlier in that same game against Atlanta. Off the snap, Quinn tries the same rip that will work later (probably because of what happens here). Left tackle Sam Baker is able to cut off the edge, but in trying so hard to get outside, he’s completely off-balance. Quinn easily tosses him aside and hits Ryan just as he’s unloading a deep ball for Julio Jones.

Transitioning from speed to power is another pass-rushing basic, but the takeaway here is that Quinn’s effect on the game is a product of sustained relentlessness as or more often than overwhelming talent. He didn’t have a sack or any hits in the Rams’ second game against San Francisco, but he never stops being an unceasing pain in the ass. Even on plays that don’t end with him making a direct impact, Quinn is putting a strain on the offensive line as a whole, and specifically on the left tackle. That’s the mark of a superstar — never letting the other team forget you’re there.

It’s hard to say Chris Long and his $48 million deal have somehow become underrated, but things have started to lean that way. Long only had 8.5 sacks last year, but his pressure totals were very solid. Outperforming his draft status and that second contract was never going to be easy, but among secondary pass-rushing options, Long ranks near the top.

Michael Brockers isn’t the star St. Louis probably hoped he would be when they took him with the 14th pick in 2012 (the same spot the Rams got Quinn a year earlier), but he won’t turn 24 until December. There’s still plenty of time.

Then there’s the rookie …

Just got this text from Rams' practice: "Aaron Donald is unreal."

When the Rams drafted Donald, the consensus was that they didn’t need him. St. Louis already had three first-round picks on its defensive line, and the fourth player, Kendall Langford, didn’t exactly need replacing after a five-sack season. But maybe one of the reasons people couldn’t see Donald on the Rams is that they didn’t want to.

Donald gives St. Louis two very sought-after elements when it comes to today’s defensive lines: an interior rusher who can consistently outmatch guards, and a ton of depth. With Donald, Quinn, Long, Brockers, Langford, and underrated backup defensive end William Hayes, the Rams have a six-man rotation to rival any in the league. 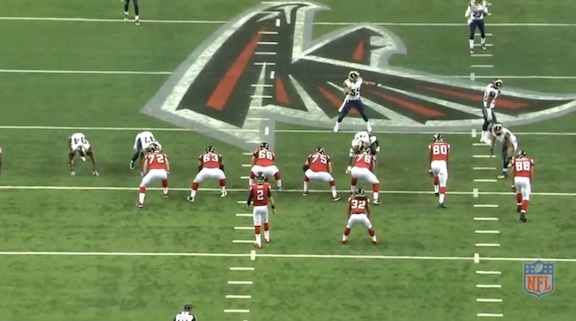 Go back to that second hit Quinn had against Atlanta. In a clear pass-rushing situation, the Rams have Quinn have lined up way outside the left tackle, with backup defensive lineman Eugene Sims as a wide 3-technique (and only calling him that because of the tilt back toward the guard).

Now replace Sims with Donald. That’s a nickel package featuring Quinn, Donald, Long, and Hayes bumped down to defensive tackle. Against a lot of offensive lines, that leaves the Rams with a one-on-one advantage at all four spots. And without the offense keeping a running back or tight end in, that means only one of the four can get double-teamed. Eventually, the numbers are going to work in the Rams’ favor.

But it’s not as simple as taking that strategy and applying it to this year’s group. After being suspended for the season the first time Jeff Fisher tried to hire him as his defensive coordinator (and then spending a year in Tennessee), Gregg Williams is finally the man in charge of the Rams’ defense.

At first glance, it’s an odd choice. The strongest element of the Rams’ defense is going to be their ability to get after the quarterback with only four rushers, but that’s never been the philosophy of Williams-led defenses.

The last year Williams was a defensive coordinator was with the Saints in 2011. Only the Packers blitzed more often that season (according to ESPN Stats & Info), and no team sent at least six rushers more than New Orleans. It wasn’t an aberration either. The year before, New Orleans sent six rushers on 100 plays — 20 more than any other team in the league. In 2007, it was Washington that led the league. That was Williams’s final season as its defensive coordinator.

When a team can create pressure without sending extra rushers, the theory is that can take extra strain off its secondary. That happens to be the area of the Rams’ defense that needs the most help. With the reliable-if-unspectacular James Laurinaitis and ultra-talented first-round pick Alec Ogletree next to him, the linebacking corps is going to be fine (it’s also worth noting that St. Louis was third in rush-defense DVOA last year). Corner and safety are the spots where the Rams have the most uncertainty. T.J. McDonald, a 2013 third-round pick, looked promising at strong safety despite missing a chunk in the middle of the season with a broken leg and Janoris Jenkins has shown flashes, but overall, it’s a group that can use some help.

It can get that help from the defensive line, if the scheme allows it. If the Rams are building a blueprint for how to maximize a pass defense with a great line and a flawed secondary, they should look no further than last year’s Panthers. Carolina finished third in pass-defense DVOA last season, thanks in large part to a defensive line that got a lot of consistent pressure without the aid of extra rushers. Carolina’s scheme meant having five defensive backs on the field for a majority of plays. St. Louis is set up to have a similar approach, with second-round pick Lamarcus Joyner as a promising nickel-corner option. Joyner is the type of player who fits well in a Williams defense. He always manages to be around the ball, and he’s often taking it away. The Saints won a Super Bowl in part because of how many times they forced turnovers in 2009.

That’s the side of Williams that can serve a defense well — aggressiveness outside of throwing extra pass-rushers at a problem. It’s the other areas that might be worth rethinking with his current group. A Quinn sack may only come once a game, but the attention Quinn gets will come every play. Having a superstar creates opportunities for everyone else. It’s how well the Rams use them that could determine just how good their defense can be.