Teahupo’o is a village on the southwest coast of Tahiti. Worldwide, though, it’s synonymous with mutant waves, the terrifically terrifying products of the area’s unique geology. A master surfer’s dream recycled, in and out, April through September.

To attempt to live out such a dream can be ill advised — five have died since 2000, many more have been violently humbled.1 To attempt to ride this wave on a motorbike is, well, hard to get one’s head around. What do you mean surf on a motorcycle?

“Teahupo’o” loosely translates to “to sever the head.”

If the video hasn’t reached your social media feed yet, this is what I mean:

This spring, Australian FMX legend Robbie Maddison did what he’s been wanting to do for nearly three years: catch some swell on his motorbike. It’s a dream full of childlike wonder, but it comes from a man who’s ridden up — and down from — such heights that land is no longer enough.

Whereas a surfer fights to coexist with the earth, Maddison has created the machinery to rule it: He fashioned water skis onto his KTM 250 SX and swapped his back wheel for one with more tread. Maddison doesn’t so much ride the wave as race it. He needs to time the waves right, but he also needs to get in and out before the saltwater compromises his motor. The final product is something many engineers, and even his own mechanic, doubted was possible.

Which makes the setting all the more confounding. Had he charged any wave from the seat of his bike, it would have been a novel stunt. But to surf — can you even call it that? — Teahupo’o is an inspired, and simultaneously informed, choice.

“Originally, surfing on my bike was the goal, but to be able to include Teahupo’o with the motorcycle — it just says it all because it’s the most famous wave on the planet. It’s definitely the heaviest,” Maddison told me Sunday, shortly before a release party for the video at the Shorebreak Hotel in Huntington Beach, California. “I thought if there was any way this was going to work, it needs to be smooth, flat water. And if you look at the way Teahupo’o breaks, it has a part of the wave that gets really square and for the most part it’s quite flat. So I thought if I could manage to get to that part of the wave, I thought I could ride through it.”

And he did — sort of. The video, Robbie Maddison’s Pipe Dream, portrays Maddison as triumphant and unscathed. In the film’s climax, he glides just ahead of a 20-foot wave. It breaks and Maddison is lost in the splash of the thundering curl; he escapes, a conqueror of earth’s gnarliest waters. But life goes on after the cut. What the viewer doesn’t see is that the same wave would ultimately overtake Maddison, sweep him underwater, and knock him unconscious.

“I was down for four waves before they were able to find me,” Maddison said. “And then they pulled me out, and I literally had no fight left in me. I was like a wet rag by the end of it. But it was just a heavy moment in my life.” 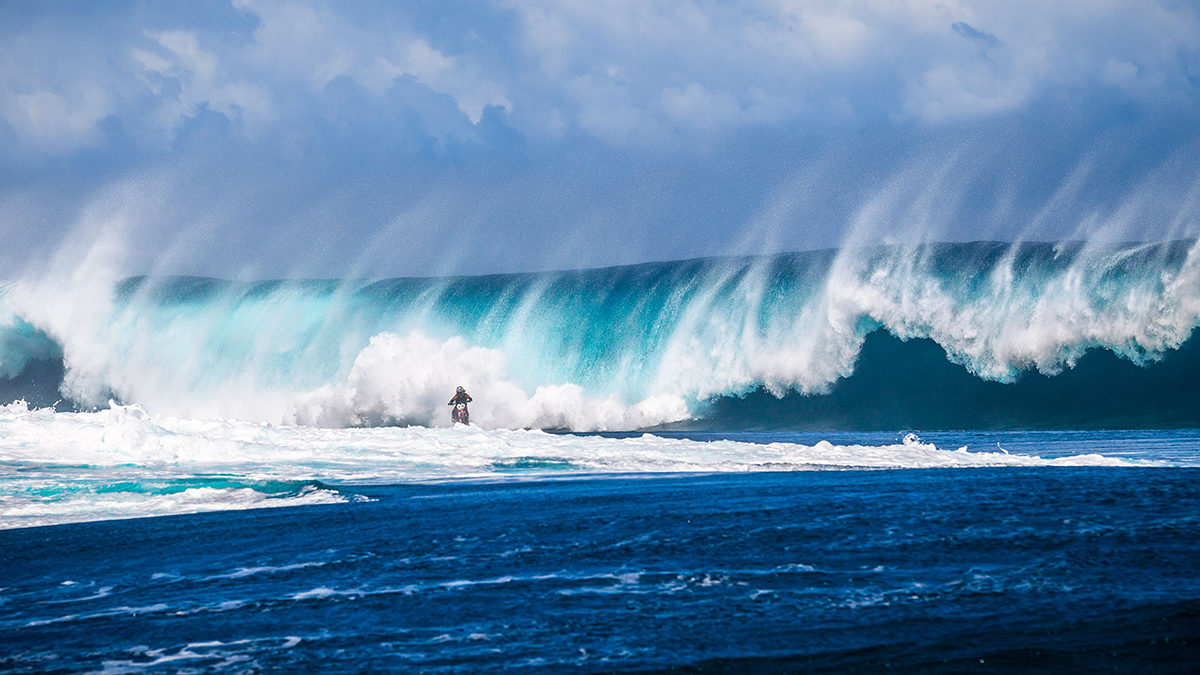 These sound like the come-to-Jesus words of someone who’s been changed by a near-death experience. But minutes earlier, Maddison had told another story, about how just last week he had flown off the handlebars of his motorbike, hit his head, and, due to latent meningitis, suffered several strokes and a short-lived coma.

And despite the injuries he sustained on the water, Maddison deemed the Teahupo’o stunt a success. “We shot something beautiful,” he explained. “You know, it was like we got the shot of this amazing action, and nature so powerful just engulfing me, someone who’s overcome so many challenges in the past. To be able to step up and dance with nature in this way, it was just exactly what I wanted to do. In the end, I would’ve liked to ride the barrel and come out. But you can’t have everything, right?”

In the video, however, he does have everything. In fact, the way it’s neatly plotted and cut together to integrate Tahiti’s dazzling natural color spectrum, from rainforest greens to translucent oceanic blues, makes the clip an astounding watch, even if it’s not particularly suspenseful. Like a 007 flick,2 the question isn’t whether our hero is going to live; it’s how he’s going to cheat death.

Speaking of which, Maddison did stunt work in Skyfall.

Almost all of Maddison’s videos achieve that feeling, especially the ones he’s made recently with DC Shoes. On his bike, Maddison exudes professionalism. In the behind-the-scenes footage from Robbie Maddison’s Air.Craft, a similar short film from 2013, Dave Clayton, a career aircraft storage facility supervisor, says: “He makes it look so easy, what he does. And that’s one of the characteristics of a professional, is he can take one of the most strenuous, hardest jobs, that you and I know would take a lot of physical and mental parts to do, he makes it look like it’s sitting down drinking a cup of tea.”

Obviously, Maddison’s stunts are no cup of tea. He’s at once creative, determined, and clinical. More than being addicted to the adrenaline, he’s hooked on the painstaking process that enables him to exceed his own limits. “I like diving in the deep end and not knowing how to get out,” he told me. “Because then you have to commit, and you have to work hard and you have to make mistakes. It’s easy to look at the things I’ve done and think, Oh, this guy, everything he touches turns to gold, but, I mean, I’ve nearly died so many times, there have been so many setbacks. But it’s not about that; it’s about having that desire to always push through.”

The Pipe Dream video suggests that the unthinkable is both possible and epic, but it doesn’t account for the preparation that made it all work. And that’s fine: The montage of Maddison scribbling shapes in his notebook and rubbing his temples belongs to a different film. It’s enough to just watch Maddison glide across the surface of the ocean on 250 pounds of metal and rubber and plastic and let your jaw drop.