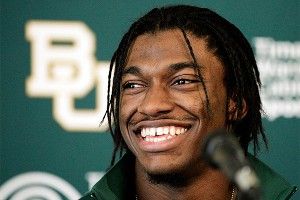 Where will you land, Robert III of House Griffin?

That’s been the question on everyone’s minds since Rams COO Kevin “Scream-Off” Demoff announced his team would be willing to trade the no. 2 pick in the draft for the right price. They already gots Bradford, yo, and to hear them tell it, Slick Sammy works alone.

And who do you get with that no. 2 pick? None other than Mr. Griffin, the third of his name, he of the lightning feet and the winning smile. The face of a franchise, if I may be so bold. A surefire eight-time Super Bowl champion, and future President of the World. (Starting in 2019, that will be a thing.)

But who’s gonna get him? Here at the Gryffindor Watch, we’ll track it so you can keep on sneaking office doughnuts and hanging rubber bands on your ears until 5 p.m. comes to save your soul until the morning.

Let’s begin at the source of all NFL news: the United Kingdom. (Please listen to like 10 seconds of this before continuing. Ten seconds only, though; more than that, and it starts getting super dirty.)

The Guardian is reporting that there are only five likely suitors for the Rams: Browns, Redskins, Dolphins, Seahawks, and Chiefs. My older brother Chris Ryan covered the first three, along with the Eagles, in Tuesday’s post. But what about the ‘Hawks and the ‘Iefs?

Seattle Seahawks
According to the News-Tribune, Pete Carroll was positively agush about Griffin four days ago. “I’d trade anyone in my own family for him, alive or dead,” Carroll said.

Oh wait, that wasn’t his real quote. Hold on, let me dig it up …

“He’ll be able to do whatever is asked of him,” Carroll said. “He’s got that kind of range of ability. Now, it’s a different system he’s coming out of, much different than what we typically see with the big-time pocket passing quarterbacks.

“But he’s just such a marvelous athlete, and he’s so smart. And he has such a great makeup about him — and I’m saying that ahead of us visiting with him when we’ll get to know him more in time. But I would think that he can handle anything.”

SO AWKWARD, GUYS. In response, Griffin was like, “He seems like a nice dude, but enough is enough with the roses and the chocolates, know what I’m saying?”

On the other hand, the Seattle Times was abuzz with news that GM John Schneider was less gung ho about the pressure to find a QB like Griffin. “No,” Schneider said. “If it happens, it happens. You can put yourself in a tough situation if you just go all-in with a guy that you feel pressured to take. You can end up setting your organization back.”

Kansas City Chiefs
The Arrowhead Addict was speculating about the likelihood of the Chiefs getting in on the Griffin action with an early surprise trade, but there is not an overload of concrete info here. However, the Chiefs did meet with Griffin at the combine, and Romeo Crennel was all like, “But soft, what light through yonder window breaks? It is the east, and Robert is the sun. Arise, fair sun, and kill the envious moon.”

Or more like: “He’s very sharp. He’s well thought out. He gives great answers. We could have talked to him for an hour, but in the 15 minutes we had we came away very impressed with him.”

(Right after Crennel left, word has it that Carroll sidled up to Griffin and whispered that Crennel’s breasts were fake. Heard it on the Internet.)

That’s all I got. Tomorrow on the Gryffindor Watch, I think there’s going to be something huge, involving Philip Rivers, the New York Yankees, and former President Richard Nixon. Stay tuned, or your friends will think you’re lame.