Two months ago, Real Madrid had won 22 games in a row, they’d recently been crowned Club World Champions, and it seemed like they’d finally solved the inconsistency that plagued last year’s domestic campaign. In short, the defending Champions League winners were the best team in the world. Or, as Sergio Ramos put it: “Real Madrid is God’s team and the world’s. We are living a splendid and unique moment.”

Today, Ramos is hurt. Soon after the calendar flipped to 2015, the streak ended with a 2-1 loss to Valencia. Real Madrid were knocked out of the Copa del Rey by city rivals Atlético Madrid — and then fell victim to a 4-0 pummeling by Diego Simeone’s men a month later. With a 1-1 home draw to Villarreal, followed by a 1-0 away loss to Athletic Bilbao this past weekend, God’s team has finally dropped to second place in the Spanish table, one point behind Barcelona.

With rumors swirling about manager Carlo Ancelotti’s future at the Santiago Bernabéu, the crisis hot potato has been firmly pressed into the capital club’s grasp. As Madrid try to figure out a way to cool off their fingers, it’s time to ask: How the heck did we get here?

Injuries, Always With the Injuries 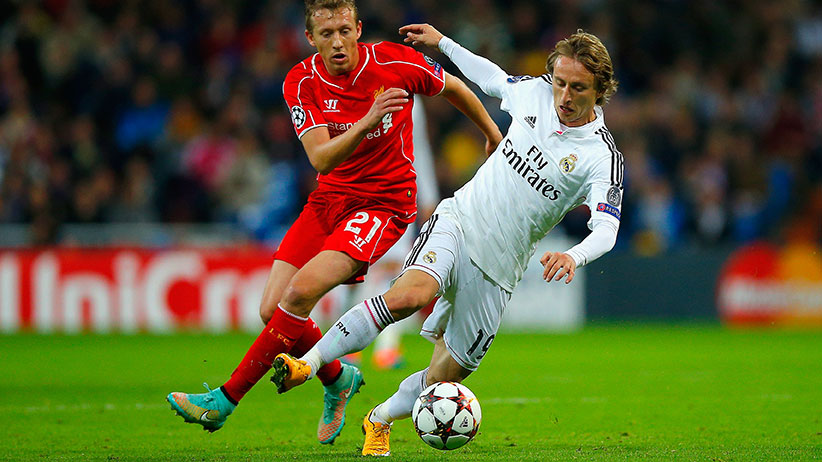 It may take Olympic-level mental gymnastics, but Real Madrid can take some solace in how hard they’ve been hit by the injury bug. As the team gets healthier, things should get better.

With Pepe missing a month due to a rib injury and Ramos only now returning to training after hurting his hamstring in the beginning of February, Madrid’s back line has been a rotating cast of walking wounded. In the midfield, World Cup star James Rodríguez broke his foot in early March and will be out until somewhere in the middle of April. And then there’s the big-daddy casualty of them all, Luka Modric, who hurt his thigh on international duty and has been out of the lineup since the middle of November. The Croatian is scheduled to play half an hour against Schalke today, and hopefully he’ll be back to full strength by the time Madrid’s March 22 showdown with Barcelona rolls around.

Still, this is Real Madrid we’re talking about! Even their backups are better than the starters on 99 percent of the teams in the world. With Modric out, Isco, every Madridista’s favorite Spanish prospect, got the call. When James went down, there were Asier Illarramendi (decidedly not every Madridista’s favorite Spanish prospect) and Sami Khedira, who was last seen starting for Germany at the World Cup. And if that weren’t enough, Madrid went out and bought 22-year-old Brazilian center midfielder Lucas Silva in January. Yet, here we are. 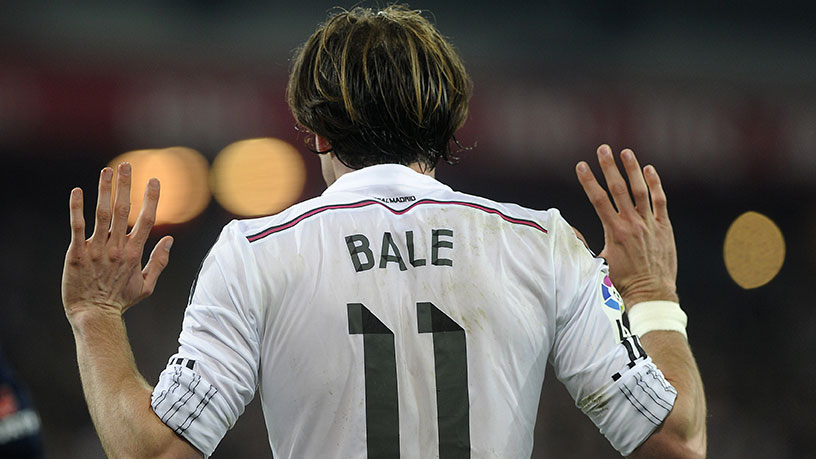 Of course, with a rash of injuries in midfield and defense, the majority of the Madrid criticism has taken the approach of “Let’s all just blame Gareth Bale!”1 First, it was Bale’s fault that Cristiano Ronaldo wasn’t scoring enough, because Bale didn’t pass him the ball. Now, since Bale hasn’t scored or assisted in his last eight games, Ancelotti has been been forced to give the club’s most expensive signing the dreaded vote of confidence while fielding questions as to whether or not the Welshman should be dropped from the starting 11.

What’s happening to Bale, though, is just a result of Madrid’s depleted midfield. Historically, Ancelotti’s biggest strength as a manager has been in figuring out how to get a tremendous amount of attacking talent on the field simultaneously without creating knock-on defensive problems. He’s perhaps best known for his AC Milan teams that somehow managed to get Kaká, Andrea Pirlo, Clarence Seedorf, and Rui Costa on the field at the same time. And he’s done something similar with Madrid, concocting a formula that uses Ronaldo, Bale, Benzema, James, Modric, and Toni Kroos. Conventionally, it’s been called a 4-3-3, with the attacking trio of Bale, Benzema, and Cristiano dubbed “the BBC” — but in reality, it’s more complex.

He may have once been one, but Ronaldo isn’t a left winger anymore. He’s a full-blown striker who just likes to start out wide. Now, that creates an imbalance within the side, as you don’t want Ronaldo tracking back and defending — you want him as high up the field as possible, ready to get the ball in space and go. In defense, Madrid need to account for that void on the left side of the field, and they do — but they’d rather not have to.

Without the ball, they drop back into more of a 4-4-2 shape, with Bale forced to do the work of a right midfielder and one of the three center midfielders shifting to the left. The key here is that most teams can’t even force Madrid to a point where they have to drop back into that defensive shape. Real apply so much pressure from so many different directions that they pin teams back and then snuff out counterattacks before they get started. The biggest strengths of the midfield trio of Modric, Kroos, and James are how quickly they facilitate Madrid’s front two becoming a front three and how hard they make it for opponents to tilt the field and force Madrid to fall back into that altered 4-4-2 shape.

When things were going well, Bale was able to link up with Benzema and Ronaldo in the attacking third and launch into the penalty box. Prior to January 1, here’s where he received the ball when the passer was in the final third: 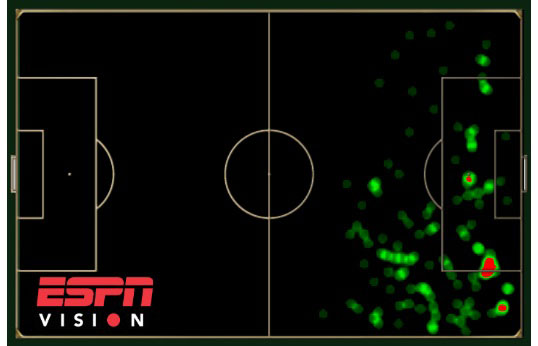 And here’s how it’s looked since: 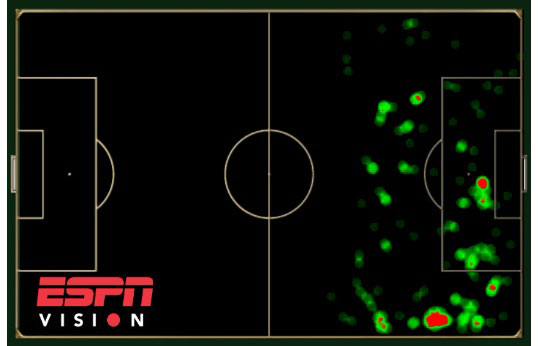 So has Gareth Bale been poor recently? Yes. Is that entirely his fault? Nope. The danger of building a very specific system is that when your key pieces — Modric and James — go missing, it’s much harder to just plug in the next guy and go, no matter how good he is in a vacuum.

Then there’s the other side of the last-resort 4-4-2, where either James or Isco are asked to operate much differently than Bale. When Madrid has the ball, both of them are deployed as attacking midfielders, the farthest forward of the midfield three. But if an opponent manages to force Madrid to retreat into their defensive shape, even if they don’t actually threaten Madrid’s goal, it puts the midfielders farther away from where they do their most attacking damage.

Finally, the biggest chunk of Madrid’s struggles can be attributed to the absence of Modric. He’s what makes this system tick — but don’t take my word for it.

Ancelotti "Modric's best characteristic for us in penetration with the ball. Howe he can unbalance the opposition team."

Modric’s incisive passing — along with his defensive work rate, which, per ESPN Stats & Information, sees him rack up 1.68 interceptions per 90 minutes — is key in pivoting the system from defense to attack and then keeping it on the front foot. Madrid managed to get by in his absence because Isco could pick up some of the slack in his place. But with both James and Modric out, Isco has been forced forward into the hybrid left-side/central attacking midfielder role, and now there’s nobody to play the ball to him and Bale. None of Khedira, Illarramendi, or Silva are that guy, and Kroos, for all his talents, would probably still be at Bayern Munich if initiating attacks were his forte.

The good news for Madrid is that Modric is almost back in the team, and if he’s 100 percent fit, he’s so good that he’ll immediately fix the vast majority of what’s wrong. The bad news is that, at least in La Liga, it may already be too late. The team that spent the first half of the season as presumed champions — while Barcelona struggled to find their footing — will probably now need to go into Camp Nou and walk out with three points if they’re going to win their first La Liga title since 2012. What a difference two months can make.