While you were at work this week, the Premier League played a whole round of games. Don’t feel bad about missing some great football action, though — even those of us who actually watched the games missed the best part, too. That’s what happens when Aston Villa and West Bromwich Albion are responsible for the game of the week, a ridiculously frenetic, fast-paced goalfest that saw home side Villa ultimately win, 4-3.

Isn’t that just the way? In a week chock-full of matches with implications for the title and the Champions League race, the most entertaining 90 minutes were played by two teams not in danger of winning anything any time soon. Aside from that, the rest of the week’s happenings left teams and fans running the full gamut of emotions, everything from happy face, to face with a tear, to angrily slanted eyebrows. Here’s how everybody stacked up.

If You’re Happy and You Know It, Score Some Goals

By far the biggest winners of this round of games were Manchester City and Liverpool. City stuck it to Spurs again, thoroughly dominating the home team in a 5-1 romp. The game effectively ended early in the second half, when Danny Rose decided to be an idiot and do this. Which, OK, the foul is a close enough call to be debatable, but attempting a tackle in the penalty box from that angle is more than just asking for trouble. It’s demanding it in a stern tone that brooks no opposition.

Liverpool didn’t need a man advantage to stomp crosstown rivals Everton 4-0. Daniel Sturridge effectively ended the game by scoring Liverpool’s second and third goals in a three-minute stretch, half an hour in. And while his second was a pretty darn slick lob, he gets a heck of an assist from Captain America, Tim Howard.

To add injury to embarrassing insult, striker Romelu Lukaku was forced off in the first half with an ankle knock.

Liverpool’s and City’s wins, along with Arsenal and Chelsea (whom we’ll get to in a minute) dropping points, put City and Liverpool in pole position for the title and the fourth Champions League spot, respectively.

Arsene Wenger said his team played in second gear, while Southampton were in fourth during their 2-2 draw. And while that’s accurate, the last year has seen Arsenal take a lot of points while seeming to play in a lower gear than their opponents. They’ve become specialists in winning close, uninspiring games on the road. So it was a surprise to see them give up the lead after coming back from a goal deficit. 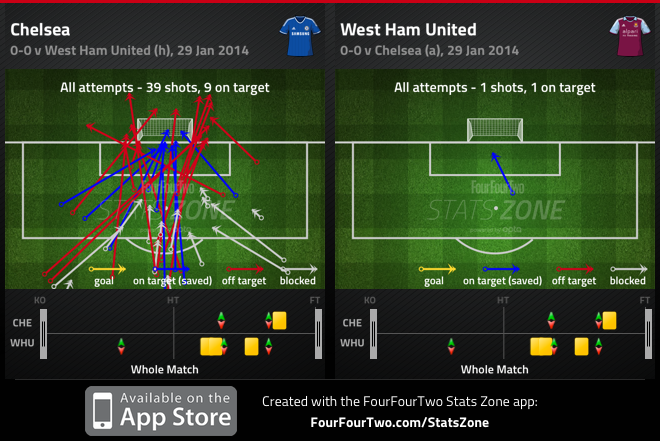 That is one lonely looking shot. But hey, at least it’s on target. Way to go, West Ham!

Now, 39 shots probably flatters Chelsea, since a lot of those were fairly hopeless attempts. Fourteen were blocked, 23 were from outside the penalty area, and really, until an action-packed final 10 minutes, Chelsea’s high-quality chances were few and far between.

Unsurprisingly, Mourinho was not at all happy with Big Sam’s approach to the game. He hurled all sorts of creative invective at the opposing manager, calling the approach “19th-century football” and saying, “The only [other] thing I could bring was a Black and Decker [tool] to destroy the wall.”

Mourinho’s frustration, while understandable, is also karmically amusing, given how he sets his teams up against top opposition. That said, Jose’s postgame fussing seems to have had the desired effect of taking the focus off of a relatively uninspired performance by his players. After all, look at how many times the name Jose Mourinho appears in this paragraph and the utter lack of any tactical breakdown of which Black & Decker tools Chelsea were missing.

What’s the Mood Ring Color for “Suck It, Jose”?

Just look on Sam Allardyce’s finger to find out. Let’s hear from the big man, as quoted by ITV, after he was told about Jose Mourinho’s comments.

He (Mourinho) can’t take it, can he? He can’t take it because we’ve out-witted him. He just can’t cope. He can tell me all he wants, I don’t give a s***. I love to see Chelsea players moaning at the referee, trying to intimidate him, Jose jumping up and down saying we play c*** football. It’s brilliant when you get a result against him. Hard luck, Jose.

Breathing a Sigh of Relief?

Crystal Palace and Sunderland both won crucial home matches. For Palace, the win takes them up to 23 points, four points clear of the relegation zone. Given the number of teams below them, it might be time to start planning for another year of Pulis ball in the Premier League. Since taking over, Tony Pulis has managed to guide Palace to an average of 1.58 points per game, which, over the course of a full season, would work out to a mind-bogglingly competitive 60 points. In the 11 games prior to Pulis’s arrival, Palace had four total points. Say what you want about Pulis ball, and his last decade at Stoke, but the man clearly knows how to manage.

Sunderland’s win over Stoke, meanwhile, lifts them out of the relegation zone for the first time all season, putting them on 21 points ahead of West Ham and Fulham at 19 and Cardiff at 18. After the loss, Stoke get to officially join West Brom in the frantically-looking-over-our-shoulder club, with 22 points.

Apparently, midweek games bring out the anger issues. Including Rose’s tackle, there were six different red cards issued over the course of the 10 games, including three straight reds for fighting. One of those went to Hull goalkeeper Allan McGregor for lashing out at Crystal Palace’s Stuart O’Keefe in the 92nd minute. Since Hull was out of subs, the world (or at least the six people in it watching the game) was treated to a couple of minutes of Tom Huddlestone putting on the goalie gloves. Sadly for those on the side of hilarity, Huddlestone didn’t face a shot during his brief cameo.

So for all of you trapped at your desks raging at the thought of working while football was being played — well, the players were taking it out on each other for you.

Well, that about sums it up, but here’s some conflicted Fabian Delph.