Just a couple of months ago, Manchester City were a team hovering underneath the cloud of long-term decline. Yaya Touré couldn’t do it all anymore, Vincent Kompany no longer looked like a rock in central defense, and even David Silva, the team’s creative hub, was pushing 30. A year after winning the tile, City finished eight points back of first-place Chelsea — and were it not for a late-season winning streak and bunch of games in which Chelsea had nothing to play for, the gap could’ve been even larger.

A summer later and four games into this season, City are the best team in the league — and it’s not particularly close. They’re the only team with a perfect record, but more importantly, they’re currently eight points clear of Chelsea, their biggest rivals and the preseason favorites. Even with 34 games left to play, the numbers paint City as the clear favorite.

Yet, not many people picked City to finish first. And even the ones who did1 didn’t think they’d be this good. So, besides a mini-meltdown at Chelsea, why the resurgence at the Etihad? Despite the drop down the table and the reduced points total, last season’s City weren’t much worse than the year before. A bizarre and unfortunate rough patch capped the team’s ceiling last season, but it turns out that the slump also laid the groundwork for the juggernaut that looks poised to leave the rest of the Premier League in its wake.

The lasting impression from Manchester City’s 2014-15 season was their meltdown come the turn of the New Year. After drawing even with Chelsea on January 1, City won a grand total of four games and took 15 points over 12 matches. That’s 1.25 points per game — the 11th-best rate in the Premier League during that stretch. This poor run did include understandable losses to Arsenal, Liverpool, and Manchester United, but it was punctuated by defeats away to now-relegated Burnley and mid-table Crystal Palace. For almost a third of the season, City picked up the results of a bottom-half-of-the-table team.

Yet, that no-good run was only 12 games long; for the other 26, City were very, very good. On January 1, City weren’t only deadlocked in points with Chelsea; they were deadlocked in almost every category imaginable. They each had 14 wins, four draws, and two losses. They each had scored 44 goals and conceded 19. Chelsea had 119 shots on target, City had 116. City led the league with 40.80 expected goals, Chelsea had 40.70.2 There was virtually nothing to separate the two teams. The only statistical hint that Chelsea might’ve been a little bit better than City was on the defensive side of the ball, where, despite giving up similar shot totals (205 for Chelsea and 209 for City), Chelsea conceded far fewer expected goals, 17.85 to City’s 25.02. If there were warning signs at that point for Manuel Pellegrini, they were buried pretty deep.

As for after the slump? While nobody was paying attention, City won the final six games of the season. Plenty of weird stuff happens at the end of the year, so we shouldn’t compare them to a Chelsea team that had the title wrapped up and spent its stretch run getting weird red cards. But still, you can’t do better than 18 points from six games.

So, what the hell happened over those 12 games? Touré missed some time because of the Africa Cup of Nations, and a couple of other players picked up injuries, but City dealt with injuries throughout the entire season. And statistically, there was absolutely nothing about those 12 games that suggested City were as bad as their results. They were first in expected goals scored per game and fifth in expected goals conceded per game — numbers roughly in line with where they were all season long.3 But since their bad luck came clustered together — rather than distributed over the course of a season — City seemed like a team with an acute weakness that portended title-less doom.

They were first and sixth overall.

If you wanted to draw a line from last season to the version of City we see today, you’d start with the 4-2 loss to Manchester United on April 12.

While the team was good, it still wasn’t quite as good as the one that came the year before. Through the 32 games including that derby defeat, City had created 0.22 fewer expected goals than in their title-winning season: 2.01 to 2.23. That decline was further exacerbated by a slight defensive erosion: They went from conceding 0.96 expected goals per game to 1.17 over the first 32 games last season. Combine the offensive and defensive changes and you’ve got almost a half-goal-per-game swing — the difference between a championship season and a trophy-less one. And so, Pellegrini changed things up.

For the majority of his first two seasons in England, Pellegrini relied heavily on his preferred two-striker system. The system is primarily a 4-2-2-2 with very little natural width. Rather than having wingers who are responsible for spreading the field, two attacking midfielders — who spend most of their time in the center — will step into wide areas when appropriate. Here’s Pellegrini explaining the system better than I ever could:

Play that system well and it looks like this. These are the average passing positions of all of City’s players during the 2013-14 season: 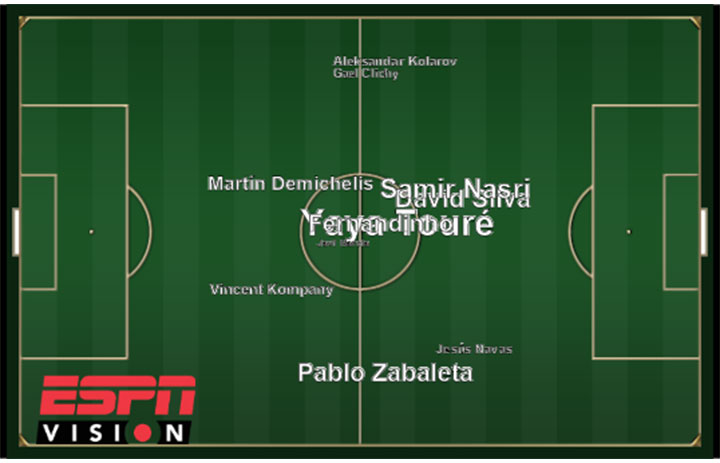 Everybody crashes inside and the full-backs provide width when needed. That’s fine — unless you lose the ball. It’s a simple numbers game. When City’s attack is flowing forward in this system, it leaves the center backs very exposed, often with only one protecting midfielder for help. It’s a trade-off, but if you keep the ball for long enough and turn enough possessions into goals, it works and it wins you the Premier League.

Before the United game last season, though, two things had changed: (1) Injuries hit the striker spot so hard that James Milner, who is now a holding midfielder at Liverpool, played the Sergio Agüero role in multiple games. And (2) Jesús Navas became the team’s right midfielder. Pellegrini stuck with the 4-2-2-2, and he forced non-strikers into the striker positions. Plus, Navas is a true winger, so he stayed close to the sideline rather than drifting in-field. The presence of Navas meant City now attacked more down the right side than they had in the previous season — something they’re not necessarily equipped for — and it also meant the team was stretched whenever it lost the ball. That’s how you wind up creating fewer chances while exposing yourself to more.

Over the last six games of the year, Pellegrini made his move and fielded a team that included three true central midfielders every single week. Toure, Fernandinho, Fernando, and Frank Lampard all got major minutes, and the difference is clear. Not only are Milner and Silva stationed to the left and right of center (as opposed to being on top of everybody else), but both full-backs are more involved on the wings. In short, it’s a much more balanced and typical formation. 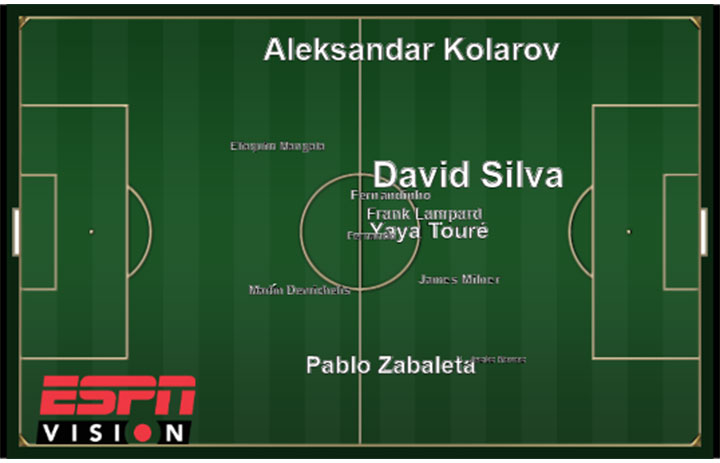 Interestingly, by removing a nominal “attacker,” City’s attacking numbers leapt to 2.32 expected goals per game over the last six matches, but their expected goals allowed jumped to 1.32. Although some of that may be down to Kompany hurting himself against United and missing most of the end of the season, that also might have been part of the reason Pellegrini opted to change things in the first place.

This season, Pellegrini has continued with the approach from the end of last season. Even though it’s now Silva playing ahead of Toure and Fernandinho, he has, so far, been flanked by new arrival Raheem Sterling and Navas in what sure seems like a classic 4-2-3-1 formation. The focus on overloading the center of the pitch is gone, and City have fully transformed into a team prioritized on creating space for a couple of superstar midfielders — Silva and Touré — to operate. 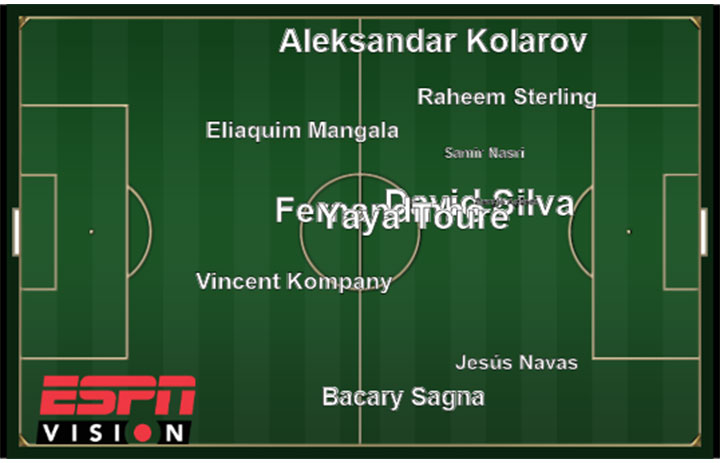 After a year of struggling uncomfortably through injuries, it’s no surprise City’s major summer acquisitions rounded out the team’s attacking core. Sterling comes in as a replacement for Stevan Jovetic, and with his flexibility to play as a wide attacker or as part of a center forward pair, he provides a flexibility that Jovetic failed to. When City played Watford two Saturdays ago, Sterling’s value to the side was evident. After being stymied by a strong defensive performance from the newly promoted side during the first half, Pellegrini took Navas off, Samir Nasri came on, and Sterling shifted from playing wide-left and instead paired with Agüero up top in Pellegrini’s 4-2-2-2 system. Then this happened.

City’s other big-ticket purchase, Kevin De Bruyne, comes in as Edin Dzeko leaves. Losing a striker and gaining a midfielder seems to indicate that Pellegrini plans to continue with a one-striker system. Yet, having De Bruyne, Silva, and Sterling on the field with Agüero could also fit the 4-2-2-2 they deployed in the second half against Watford. Whatever the alignment, Pellegrini now has five players — Silva, Navas, Nasri, Sterling, and De Bruyne — who can play behind Agüero and fit together less awkwardly than they were forced to last season.4

City also added Fabian Delph (to provide young depth and replace Lampard’s old depth) and Nicolás Otamendi (to add stability to the defensive line), but neither one has played significant minutes yet.

A year ago, a combination of bad finishing luck, injuries, and mismatched personnel kept City’s point total from being as high as their performance may have warranted. And if last season showed us anything, it’s that even the richest teams function along a delicate balance, and their (expensive) players need to both be healthy and deployed in the proper way to maximize the team’s output. City and Pellegrini struggled with that at times, but after a late-season tactical tweak and some well-targeted summer signings, they seem to have figured it out. It’s a long season, but even with 34 games remaining, that’s not great news for the rest of the league.