Manchester United looked like an actually competent soccer team this weekend, demolishing QPR. Of course, it helps when one of your new, big-ticket acquisitions scores when he’s trying to assist.

And assists when he’s trying to score.

Before we pronounce United “back,” though, let’s spare a thought for just how horrible Queens Park Rangers are.

This is their second 4-0 loss of the season (Spurs wrecked them the second week), which means they already have a whopping -8 goal differential. It’s usually bad form to make fun of a newly promoted side, but remember, QPR is managed by Harry Redknapp, and he has been doing things like paying Rio Ferdinand too much money, buying Niko Kranjcar (for the fourth time in his career), and attempting to bring Jermaine Defoe back to England. Then he complains about the potential penalties in store for QPR should the club be relegated. QPR stink, but at least they’re entertaining.

This was the coming-out party for the 2014-15 United, version 2.0. With Ángel di María, Ander Herrera, Marcos Rojo, and Daley Blind slotting in, this was a totally different-feeling team than the one that suffered losses to Swansea and MK Dons. That doesn’t mean all of United’s problems are solved, but at least it’s a step in the right direction.

For large stretches of Saturday’s match, Arsenal had the look of a vintage Arsene Wenger team. The good kind of vintage. There was lots of short, quick passing, from short, quick players; possession in the final third; and the promise that something special could happen at any given moment.

I guess we’re calling Arsenal’s lineup a 4-1-4-1. With sustained possession in the final third, Aaron Ramsey has the time and freedom to join in the attack from his deeper midfield position. Of course, playing all that pretty football has some drawbacks, especially when your defensive midfielder is Mathieu Flamini.

It’s an interesting conundrum for Wenger. After years of slow offensive decline, Arsenal finally seem capable of putting together the truly attractive brand of football their manager preaches. But they don’t have the defensive spine to get away with it, especially against other elite opposition.

Aston Villa have Liverpool’s number at Anfield. For the fourth season in a row, Liverpool failed to defeat the Villains at home. Then again, Aston Villa are second in the table, with 10 points. Maybe they’re just a good team, taking the points they deserve. Paul Lambert’s side held the vaunted, high-flying Liverpool attack to one shot on target. Villa scored a scruffy goal early, then defended their butts off, just like they have all season.

Here’s the problem with that argument: Yes, Villa held Liverpool to one shot on target, but they got outshot, in total, 18-5. 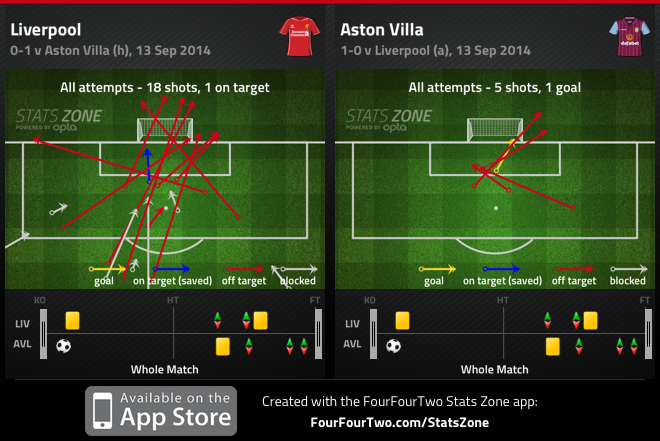 Aston Villa have now taken only six shots on target in four games. It just so happens that four of them found the back of the net. Villa have taken the second-fewest shots in the league and gotten the fewest shots on goal (stats courtesy of ESPN Stats & Info). And they’re not especially stingy on the defensive end, conceding the sixth-most shots.

Villa clearly aren’t bad, but they certainly aren’t close to good, as the table would have you believe. The fact that they stifled Liverpool has as much to do with the way Liverpool struggles against unambitious teams as anything else. Give Liverpool space, and they carve you to pieces. Sit back and make them break you down, and Brendan Rodgers’s side becomes a lot less frightening.

Blame Alan Pardew for Newcastle’s failings? Or blame somebody else?

The fundamental issue is that everybody in their management structure is incredibly unlikable. Owner Mike Ashley is wildly unpopular, and it doesn’t help that he keeps banning members of the media from the club for writing stories he doesn’t like. When Ashley hired Pardew in 2010, it was a controversial decision. Pardew was replacing Chris Hughton, the guy who had led the team back to the Premier League. Oh, and Pardew is also pretty unlikable himself. Last season alone, he cursed out Manchester City’s Manuel Pellegrini and head-butted a player.

Under the current regime, however, the team has consistently finished mid-table, even squeaking out a fifth-place finish for a Europa League spot in the 2011-12 season. This “success” has been achieved despite the consistent sale of their best players and investing the funds in lesser-known, primarily French talent. It’s what Newcastle does, and nobody within the organization seems particularly bothered by it. And that’s the problem.

Most clubs outside of the Champions League race don’t actually have a clear path (or any path) to contention, but at least they give the impression that they’re trying. Newcastle seem to be almost not trying.

Firing Pardew will certainly make fans happy, and after all of his antics, it’s hard to argue that he wouldn’t deserve it. But it’s hard to imagine his exit really changing Newcastle’s trajectory.

Verdict: Blame Pardew (after all, if you aren’t going to compete, you might as well make the fans feel better)