It’s pretty hard to win football games when you consistently give the ball to the other team. That’s no secret gem of coaching wisdom, but even just a cursory glance at the league’s five most charitable teams shows as much: The Raiders are 1-11. The Jaguars and Buccaneers are 2-10. The Giants are 3-9. And the Eagles … are 9-3 and leading the NFC East. Lowly Jacksonville got everyone’s attention by strip-sacking Nick Foles on Philadelphia’s first two drives of the season, and the turnovers haven’t stopped — the Eagles now lead the league with 28. Like someone juggling chain saws, they’re putting on quite a show, but it seems inevitable that something will go disastrously wrong.

On the surface, turnovers might not seem much worse than punts, but it’s the massive difference in field position that changes the equation. For every wayward pass that ends in an opponent’s arms 40-plus yards downfield, there is a snap fumbled away behind the line of scrimmage or a linebacker who steps in front of a short slant route. It’s part of the reason Philadelphia has fallen to 15th in offensive DVOA after finishing third in 2013. 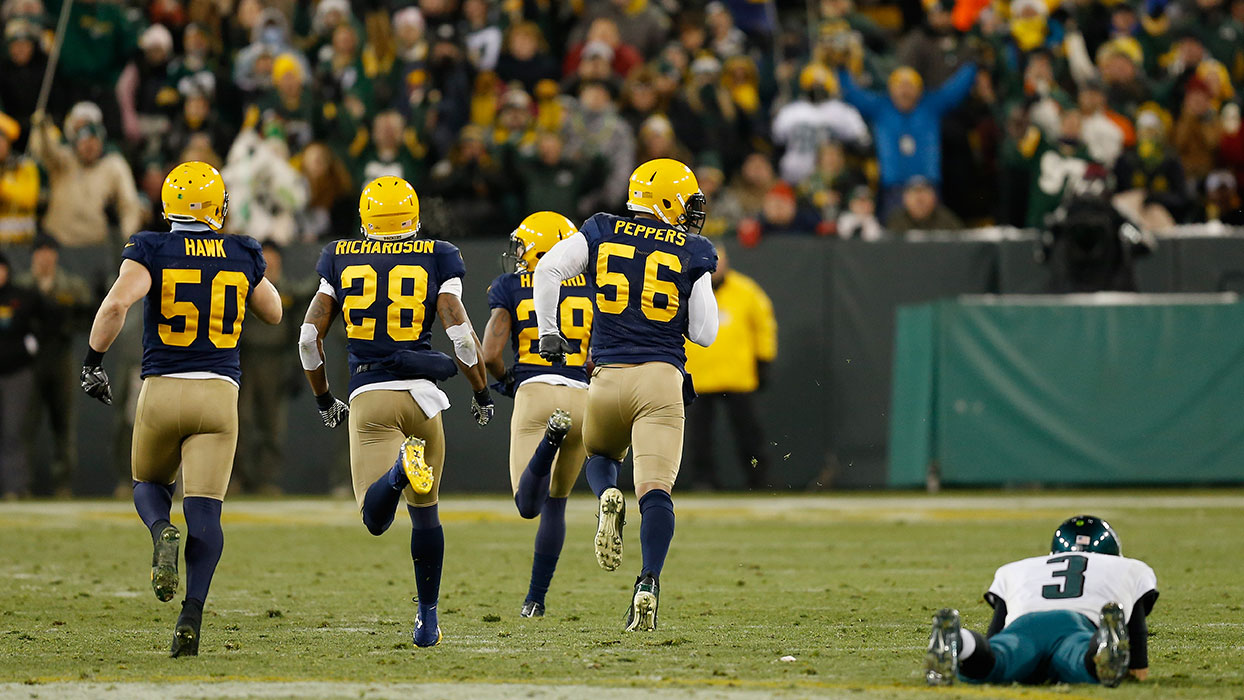 The 2003 Rams were the last team to make the playoffs while leading the NFL in turnovers. 1 Kurt Warner fumbled six times in the season opener — losing three and, thanks in part to a concussion, his job in St. Louis — before Marc Bulger followed a 12-4 season with three interceptions in a one-and-done playoff exit. Just two seasons earlier, though, the Greatest Show on Turf went 14-2 and made the Super Bowl despite a league-leading 44 turnovers.

The Giants went 10-6 in 2010 despite a league-high 42 turnovers, missing the postseason on tiebreakers.

No coach, even one as forward-thinking as Chip Kelly, will claim that turnovers don’t matter. But Kelly’s push-the-pace philosophy does mean we have to adjust our expectations. Because the Eagles have run more offensive plays than any other team this season, additional turnovers shouldn’t be surprising and ultimately aren’t as impactful. Philadelphia only had 19 giveaways last season, however, and this season’s foibles can’t be completely absolved by rate statistics; according to ESPN Stats & Info, the team is also worst in the league in percentage of drives (17.4 percent) that end in a turnover.2

It doesn’t matter how many points you score as long as it is more than the opponent, and turnovers are also best viewed holistically. The Eagles have a minus-6 turnover margin – below average, but not last! — and have only been outscored by two points on drives immediately following turnovers. They’ve also benefited from some unsustainable advantages, like 10 return touchdowns (on two kickoffs, two punts, two interceptions, two fumbles, and two punt blocks) and Cody Parkey’s 27-of-29 rate on field goals.

But the main reason Philadelphia’s record still looks pristine despite the dents you would expect from a hailstorm of turnovers is that most have not come at decisive moments. Turnovers did play a role in losses to Arizona and San Francisco, but Philadelphia has benefited overall by unintentionally bunching its turnovers together. Eight of Philadelphia’s 10 costliest turnovers, according to ESPN Stats & Info’s win probability calculations, happened in just three games.

Most of Philadelphia’s turnovers have also happened with the Eagles already far ahead or far behind, producing little impact on the game’s outcome. Philadelphia was trailing 30-6 in the second half of a blowout loss to Green Bay before turning the ball over four times – the likelihood of turnovers increases with increasing desperation to score, yet it’s a low-risk, high-reward situation, and those touchdowns by Julius Peppers and Casey Hayward were meaningless. Even more Philadelphia turnovers have come only after building a large lead. The Eagles were beating the Titans by 17 points when Sanchez threw two interceptions, and they were leading the Giants by 20 during two of Foles’s interceptions. All three turnovers against the Rams, including LeSean McCoy’s failed attempt to hypnotize defenders with a waggling ball, came with leads of 13 points or more.

Now, this isn’t meant to encourage Philadelphia to play recklessly. That’s a way to lose games, particularly against better offenses that can take more advantage of extra drives than the aforementioned bottom-feeders did. Aaron Rodgers, Russell Wilson, and Drew Brees are scary enough without hand-delivering them the football, and although the Eagles have avoided disaster through 12 weeks, come the playoffs, one poorly timed mistake can end a season.