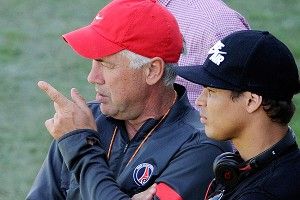 After all the preseason hype, let’s put away the anointing oil and look at Paris Saint-Germain for what they really are: an overrated and complacent team of underachievers. An overpriced vanity project. A rich man’s plaything. Before a ball was kicked, they were handed the Ligue 1 title. We should give a trophy for second place, everyone said. After two matches they sit in 12th place and are not the world-beaters we expected. But it’s only two matches, you say. True, but with PSG the only perspective that’s proper is a complete lack of it. When you spend as much money as they have, the one thing you can’t afford is patience. So after two draws, first against Lorient (2-2), then against Ajaccio (0-0) Sunday night, they are now in crisis. PSG on relegation watch! Ancelotti to be sacked by Christmas! They face Bordeaux at home next Sunday night and need a win to avoid further embarrassment.

Sunday night’s match was billed as les millionaires contre les smicards, literally the millionaires versus the minimum-wage earners. Ajaccio talked a lot of trash before the match and backed it up. They didn’t care about the money, they said. It’s 11 versus 11. They have two arms and two legs just like we do. The millionaires were missing Zlatan Ibrahimovic because of a foot injury, and Thiago Silva, who still is not ready after playing for Brazil in the Olympics. But so what? They still fielded a team that cost over 100 million Euros. No excuses. No sympathy.

The match was tedious, lacking in many clear-cut chances. PSG once again looked like a team of 11 strangers making one errant pass after another, with Javier Pastore the main culprit. Ajaccio played an open, attacking style. Even though they lacked the quality to threaten frequently, they kept lofting balls into PSG’s box and had the best chance of the match when Eduardo’s shot deflected off the right post.

Credit to Ajaccio for getting a point. They still haven’t lost a home match since last December. The praise stops there, because in the end it’s not about Ajaccio. It’s about PSG. This whole season will be about PSG, a perennially underachieving club with delusions of grandeur. Remember, the question wasn’t whether PSG would win the title this year but whether they would win the Champions League in the next five years. Yet, for over 100 million Euros they failed to score against a team that conceded the second-most goals last season. Most of the blame is on manager Carlo Ancelotti and his confusing team selection.

With Ibrahimovic unavailable, he went with a front three of Nene, Jeremy Menez, and Ezequiel Lavezzi when center forward Kevin Gameiro, who had a hat trick last season against Ajaccio, might have been a better choice in Ancelotti’s 4-3-3 formation. The false nine formation is all the rage nowadays (thanks to Barcelona and their use of the best false nine in the world, Lionel Messi), but Ancelotti introduced a new concept last night: the invisible nine. Menez was his usual disappointing self, missing PSG’s best chance of the match. Nene was a picture of frustration and Lavezzi’s lone contribution was a two-footed tackle that led to a red card that left PSG down to 10 men, or minus 30 million Euros.

In midfield, Ancelotti shoehorned Blaise Matuidi into the team and partnered him with Clement Chantome to support Javier Pastore. Why play with two defensive midfielders against a team as limited as Ajaccio when you have the precociously talented Marco Verratti? Ancelotti’s formation put all the pressure on Pastore to create, and the Argentinian buckled under it. Only Ancelotti knows why Verratti didn’t play from the start, but his introduction changed the match, and PSG looked like a team of ideas, thought, and skill when he came on in the 74th minute. His quick feet opened up PSG’s best chance in the second half as he set Pastore free down the wing, but the Argentinian’s poor touch killed the move.

If Ancelotti were anyone else, his job might be in jeopardy today. This seems extreme to suggest after just two matches, but PSG fired their previous manager, former PSG player Antoine Kambouare, while his team was leading the league last season. Ancelotti’s appointment destabilized the squad, and it’s generally accepted that PSG threw away the league title last season under his watch. But Ancelotti is safe mostly because the PSG project needs a big-name manager with credibility if they are to attract the world’s top players to play in Europe’s fifth-best league. Still, with such impatient owners, Ancelotti needs to start winning.

Yes, it’s only two matches. Yes, we have yet to see the best from PSG. Yes, they might still win the league, and yes, they were without Ibrahimovic. But no, they do not deserve patience, understanding, or anything other than the scrutiny and ridicule that is sure to follow this week. They invited the attention and can’t shrink now that the spotlight is getting hot.

They’ve shown all the signs of a team that believes its own hype. “We are armed to achieve greatness,” Pastore said earlier this week. Chantome added, “We play every match to win. That’s normal for a team of our stature.” But let’s look at PSG’s stature: The club hasn’t won a league title in almost 20 years, they’ve failed to win two matches they were expected to dominate, and they have spent over $300 million on a team that still looks far from complete. A team of that stature could benefit from a little humility.