After decades of making his living coaching the 4-3 defense, Bob Stoops has no problem listing the reasons he opted to install a 3-4 scheme at Oklahoma following the 2012 season. There are four, and Stoops rattles them off like a man who’s discussed the subject a few times too many: One, the shift suited the Sooners’ personnel following the loss of their top four defensive tackles; two, it put more speed on the field; three, it gave them better leverage for defending the edges against spread offenses; four, it allowed them to be more multiple.

Stoops decidedly did not make the shift, he insists, because of the defense’s collapse during the second half of the 2012 season. He doesn’t deny the collapse itself, of course, because he’s not obtuse: On a per-game basis, the 2012 Sooners gave up more yards (398) and points (25.5) than any previous defense of Stoops’s tenure. In consecutive weeks that November, they allowed 34 points to Baylor, 49 to West Virginia, and 48 to Oklahoma State, managing to escape upset losses in all three games thanks only to the shootout-friendly OU offense; in the bowl game, the defense was on its own, and it yielded a Cotton Bowl–record 633 yards to Texas A&M en route to a 41-13 massacre. For the season, Oklahoma ranked 50th nationally in scoring defense, 76th in total yards allowed, and 94th against the run. On third downs, OU ranked 75th at getting opposing offenses off the field in 2012, after ranking in the top dozen in that category in 2011, 2010, and 2009. I could go on.

How much does that temporary failure have to do with the change underpinning the defense’s success nearly two years later? “Not much, really,” Stoops said this week, dismissing the notion that one egregious month (in the course of a 10-win season, no less) was enough to shake the foundation of his philosophy. “None of the reasons [for the transition] had to do with what we did the year before. The reasons were personnel-driven.”

So go ahead and abandon any notion you may have that this weekend’s Big 12 opener at West Virginia represents some kind of referendum on the 3-4, which held up just fine in 2013, when Oklahoma rebounded to finish among the top 25 in total defense, scoring defense, rushing defense, and third-down defense. Instead, think of it as an opportunity to compare and contrast how far the Sooners have come, or not come, as the case may be.

In 2012, the trip to Morgantown resulted in the worst defensive effort in Oklahoma history. In one night, the Mountaineers racked up an obscene 778 yards of offense (458 rushing, 320 passing), the most ever against an OU defense. West Virginia’s Tavon Austin single-handedly generated 572 all-purpose yards as a rusher, receiver, and return man, more than any FBS player in any game in the past decade. After halftime, WVU scored touchdowns on five of its six full possessions, on drives covering 78, 92, 97, 85, and 92 yards; only one of those drives took more than five plays. At one point, Stoops was spotted on the sideline lashing out at his brother Mike, who coordinates the defense, and who later conceded, “When you are getting ripped like that, you deserve it.” This, again, in a game that Oklahoma won.

The matchup that awaits the Sooners on Saturday night is less daunting only in the sense that Austin and then-WVU quarterback Geno Smith are both now in the NFL. There’s no equivalent of Austin’s lethal versatility right now in Morgantown, or anywhere else in college football. Through three games, though, the 2014 Mountaineers have set a course that hews much closer to the one forged by the gonzo 2012 attack than by its toothless successor in 2013.

In the opener, West Virginia scored 23 points on 393 yards of offense against Alabama, the most by a regular-season, nonconference opponent against the Tide since Nick Saban’s first season in Tuscaloosa, in 2007. Last week, WVU rang up 40 points on 694 yards at Maryland, earning a win despite coming away empty on four separate opportunities inside the Terrapins’ 30-yard line. Senior quarterback Clint Trickett is averaging 408 yards passing per game with a touchdown-to-interception ratio of 7-to-1. Wide receiver Kevin White ranks second nationally in both receptions (32) and receiving yards (460), having already torched Bama’s corners for 143 yards and Maryland’s for 216.

Regardless of the scheme or personnel on the other side, beating the Mountaineers again seems less a question of stopping them than of merely surviving them.

The only specific criticism Stoops is willing to submit to concerning the 2012 defense is that it was “a little bit coverage-heavy,” too concerned with shoring up the secondary against the pass at the expense of stopping the run and generating pressure on the passer.1 The numbers bear that out: That season also marked new lows under Stoops for rushing defense (193.0 yards per game), yards per carry allowed (5.2), tackles for loss (53.0), and sacks (24). Against West Virginia, the pass rush barely touched Geno Smith and didn’t register a sack. And although the numbers have improved across the board, nowhere has the transition to the 3-4 played more clearly to the Sooners’ strengths than in the pass rush.

Of course, former players from that team have some criticisms of their own.

In part, that’s due to the presence of junior Eric Striker, who’s listed as a linebacker but looks like a safety and seems most comfortable lining up like a defensive end across from 300-plus-pound offensive tackles. “He’s an outside linebacker slash safety, however you want to call it,” Stoops said. “That’s the position [former All-American] Roy Williams played when he was here [from 1999 to 2001], and he was considered a safety. [Striker is] a guy that can play in space or over tight ends. He’s physical, he can run, he’s great at getting off blocks. And he can rush the passer.”

Actually, the pass-rushing part should probably come first. Unless you live and breath Oklahoma football on a weekly basis, most of what you know about Striker probably comes from his repeated manhandling of Alabama’s touted left tackle, Cyrus Kouandjio, in the Sooners’ upset over Bama in January’s Sugar Bowl. Striker had three sacks in that game, including the clincher on a pure speed rush in the final minute:2

That’s right, he’s the person primarily responsible for bringing Americans together over this feel-good moment.

As a team, Oklahoma sacked AJ McCarron seven times, making it the most painful night of his college career in more ways than one. In their only test to date in 2014, the Sooners registered five sacks last Saturday in a 34-10 win over Tennessee, only one of which was credited to Striker, as a half-sack. While his influence went well beyond that (as you’ll see below), that sack is an ideal example of how the Sooners use the threat of multiple stand-up rushers — “multiple” is Stoops’s favorite word to describe the current scheme — to get their best player free.

Before the snap, Tennessee appeared to be in good shape, protection-wise: The Vols had seven potential blockers for six potential Oklahoma rushers, and (depending on how OU attacked) as many as three guys to deal with Striker, who was lined up over the tight end on the right side. The running back, Marlin Lane Jr., was in position to help with Striker if necessary, and the right tackle was also there to help if the tight end or running back left on a pass route.

Based on that alignment, Tennessee appeared more vulnerable to its left side, where there was no tight end or back to help; to compensate, the entire line would move to the left at the snap to even up the math. Because this was a max protect, that should have still left two blockers (the TE and Lane) on Striker to the right.

Just before the snap, however, Oklahoma suddenly changed the math by blitzing safety Quentin Hayes from the nickel position on the offense’s right and dropping DE/OLB Geneo Grissom into coverage on the left. 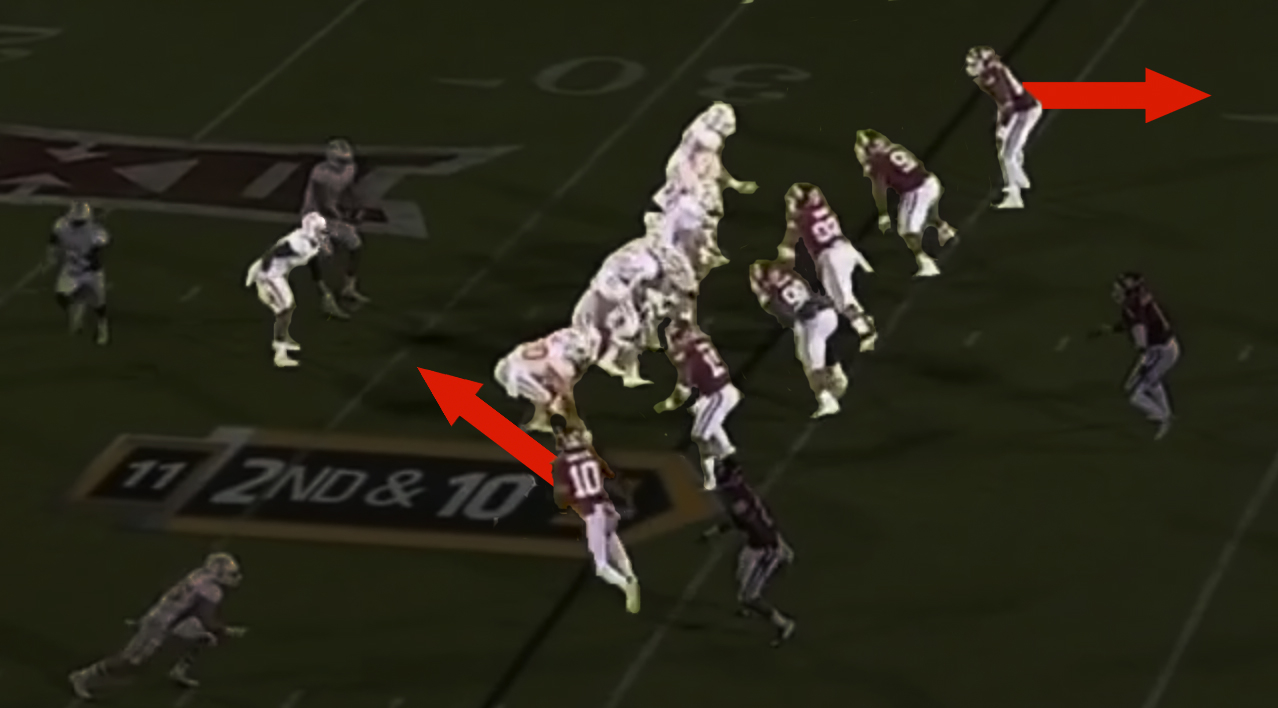 On the chalkboard, this scenario still favored Tennessee: There were seven blockers against five rushers. In reality, Hayes’s blitz was so well disguised before the snap that the offensive line didn’t account for him at all, leaving Lane to take on Hayes one-on-one while the rest of the protection shifted to account for the apparent pre-snap threat, Grissom, who was doing nothing in particular with no receivers to his side of the field. So instead of a 7-on-5 battle, there were two, smaller battles: a 5-on-3 matchup to the offense’s left and a 2-on-2 matchup to the right … 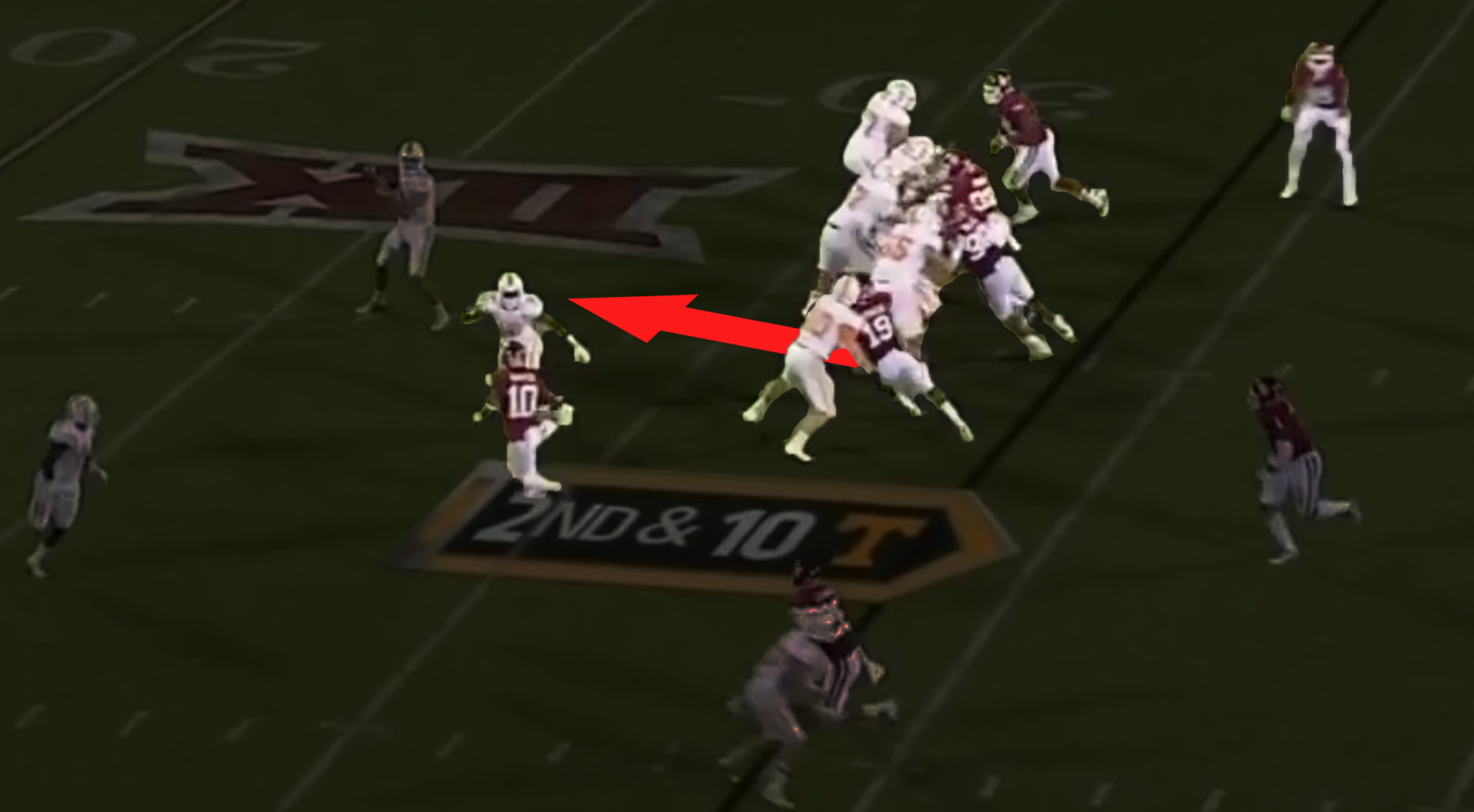 … with Striker isolated one-on-one against a true freshman tight end who was a little slow off the snap. That ended about as well as you’d expect for Tennessee, which was left with four offensive linemen literally blocking no one as an All–Big 12 rusher got an essentially free run on the quarterback. 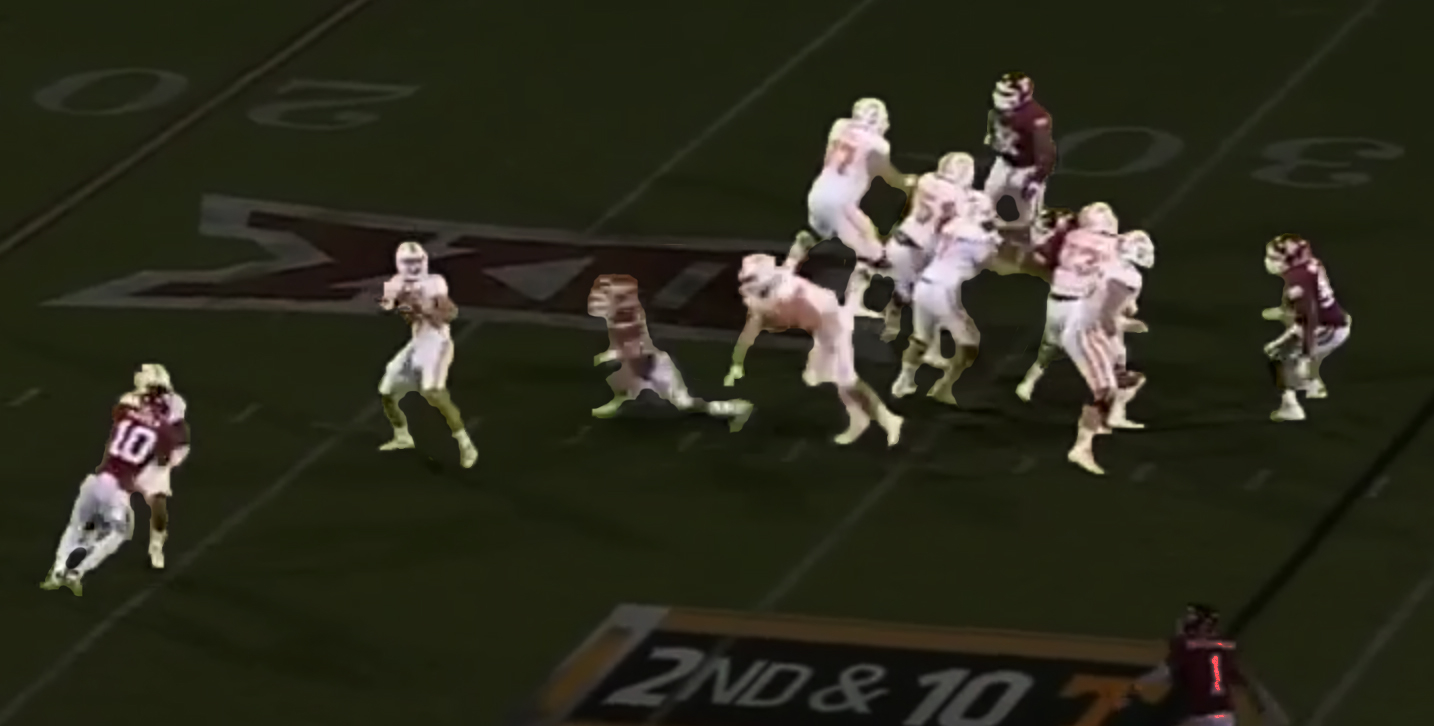 Somehow, Striker missed the initial sack on this play, managing only to swipe at Justin Worley as his momentum carried him past the Vols QB. Still, the disruption in the pocket allowed Hayes the time he needed to shed Lane’s block and close in for his second sack of the game, while Striker recovered to pick up his (well-deserved) share in the box score.

Striker deserves credit for at least two of the Sooners’ other four sacks as well, especially on Matthew Romar’s first career sack, which came in the second quarter and directly resulted from Striker (coming on another blitz from a pre-snap nickel look) forcing Worley to step up in the pocket and into Romar’s waiting arms.

And in the first quarter, Striker arguably influenced a sack by not blitzing, just because the Vols’ right tackle and tight end were so preoccupied by the possibility of Striker rushing that they both forgot to block the guy right in front of them, Chuka Ndulue.

I don’t know what Tennessee’s protection was supposed to look like, but it wasn’t that.

Before the season, Stoops was openly optimistic about his defense, telling reporters, “We’ve got a chance to be good.” The 3-4 experiment in 2013 was arguably a more radical shift for the coaches than for the players, most of whom had barely seen the field in any alignment: Of Oklahoma’s top 20 tacklers at the end of the season, only four had significant starting experience at the beginning of the year, and one of those four (linebacker Corey Nelson) was sidelined by a season-ending pectoral injury in the fifth game. The 2014 defense, by contrast, features 10 players who started at least four games in 2013, for whom the revamped scheme is the status quo.

“There’s no comparison. A year ago, we were just implementing the basic 3-4 defense,” Stoops said in August at the Big 12’s preseason media day. “Schemewise, we’re light-years ahead of where we were, how we’re handling the different formations from the offense.”

Of course, handling a prolific, up-tempo offense overseen by Dana Holgorsen is an entirely different challenge than handling attacks from Louisiana Tech, Tulsa, and a fledgling Tennessee outfit still pecking away at its shell. The Mountaineers have made a dramatic leap forward on the learning curve this season after a major overhaul to the lineup in 2013, too, and stand to put the Big 12 on notice with an upset of the preseason favorite. Both sides on Saturday will be a long way removed from the fireworks of 2012. But even if that game tells us little or nothing about how this weekend’s edition is likely to unfold, it’ll still be a useful measuring stick for determining where Oklahoma’s defense stands in 2014.