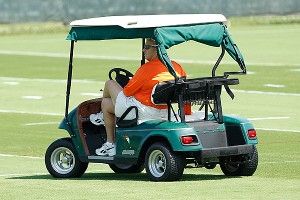 Well, well! Someone has been reading Machiavelli’s The Prince! Or possibly listening to Tupac’s Don Killuminati: Makaveli. Either way, Sean Payton is, reportedly, getting into seriously heavy chess moves.

Just days after NFL Commissioner Roger Goodell announced Payton would be banned for the 2012-13 season, due to his involvement in Bountygate, ESPN’s Chris Mortensen reported Monday that Payton has approached his mentor, Bill Parcells, about taking over the New Orleans Saints on an interim basis.

Hard to tell to whom this is more of a middle finger. On one hand, you’ve got current Saints coordinators Pete Carmichael (offense) and Steve Spagnuolo (defense), who no doubt wouldn’t mind wearing the Saints crown, if only for one season. They are probably a little like, “What am I? Chopped liver?” In comparison to Bill Parcells, yes, they are chopped liver.

The other person on the receiving end of some bird-flipping is Goodell. Payton’s suspension is supposed to hurt the Saints, not provide them with an opportunity to be coached by one of the greatest motivators and talent evaluators in the history of the sport. Goodell was sending the Saints straight to their room with no dessert. With this move, it’s like the Saints go to their room, open up their wardrobe, and BOOM, NARNIA.

This will probably not happen because (a) it’s too insane, and (b) look at the picture above; Bill Parcells is not about this life anymore. But it could work. Payton is part of the Parcells coaching tree, and you would have to think that a lot of the processes followed by the Saints, on a day-to-day basis (the ones that don’t involve … getting paid to break people’s hands), are very similar to those developed by Parcells. You wouldn’t have to teach an old (old) dog new tricks. He invented the tricks in the first place.