At an Atlanta gate for a flight to Chicago the weekend of the Stanford–Notre Dame game, with weather forecasts calling for 40-something temperatures and spitting rain in South Bend, a group of Fighting Irish alumni stood making wry jokes about luring commitments out of the high-profile recruits scheduled to make official campus visits that Saturday. “Fly ’em in at night,” said one older gentleman, “turn all the lights in the stadium on, and drive by there.”

“Then roll up the windows and take ’em out for pizza.”

Inhospitably chilly and wet environs aside, the elemental lures of Notre Dame — the football program’s history, the university’s prestigious reputation — remain unchanged. And boosted by a 2012 run to the national title game, the past couple of recruiting classes that Brian Kelly and his staff have hauled in have been replete with talent. The newer Domers are long on recruiting stars and low on time to develop and back up that hype, but for several of these underclassmen, that’s just how it’s got to be. Circumstances have contrived this season to thrust them into prominent spots on the depth chart ahead of schedule, and after four wins versus pushover competition and two close victories against Stanford and UNC, the fifth-ranked Irish are staring down the biggest obstacle between them and the first-ever college football playoff: second-ranked Florida State.

Attrition hit the Fighting Irish defense hard between the 2013 and 2014 seasons, with a half-dozen starters exhausting their eligibility, a couple more key cogs sidelined amid an academic integrity investigation, and a defensive captain on and off the field because of injuries. Sophomore cornerback Cole Luke, who took over a starting spot this fall from the suspended KeiVarae Russell, has a pragmatic outlook on the situation.

“Somebody has to step up,” said Luke after ND’s win over Stanford, in which he recorded two interceptions, one sack, one forced fumble, and broke up two Cardinal passes. “I mean, we can’t play with one corner.” The nephew of former Sun Devils and Dallas Cowboys star Darren Woodson, Luke veered from his uncle’s alma mater to sign with the Irish over other big-time programs like Oklahoma, Texas, and UCLA that would have kept him nearer his home state of Arizona. He also tells the story of earning the starting job in a matter-of-fact manner: “I remember Coach [Kerry] Cooks coming up to me in practice and going, ‘We’re gonna need you.’ And that was it. We just moved forward.”

“What he’s improved dramatically on is his technique,” said Kelly of Luke in his press conference before the Irish’s Week 7 shootout win over North Carolina. “Now, along the way, he’s gained a lot of confidence. But technique has been probably the no. 1 thing that he’s improved on over the past six weeks that’s allowed him to grow as a corner.” Luke would go on to intercept UNC’s Marquise Williams midway through the fourth quarter, a turnover that led directly to the Irish’s final touchdown and prevented the Tar Heels from tying the game when they scored on their own final possession.

Exacerbating the between-seasons upheaval in South Bend: the departure of defensive coordinator Bob Diaco to the vacant head-coaching gig at UConn, and the installation of new DC Brian VanGorder and his intricate 4-3 scheme, which is a lot to take in even for a veteran player. All of that plus an offense with a tendency to put the Fighting Irish defense in awkward spots at inopportune moments have yielded a wealth of growing-up opportunities for VanGorder’s younger charges. Luke beams outright when discussing the new system.

“I know that sounds kind of corny,” he said after the Stanford game, “but if you watch [VanGorder], you can tell we’re all running around having fun, and we all get our chances to shine within the defense.”

“I love playing for him,” said sophomore linebacker Jaylon Smith. “He’s so in tune with us. Not only as athletes, but as people.” 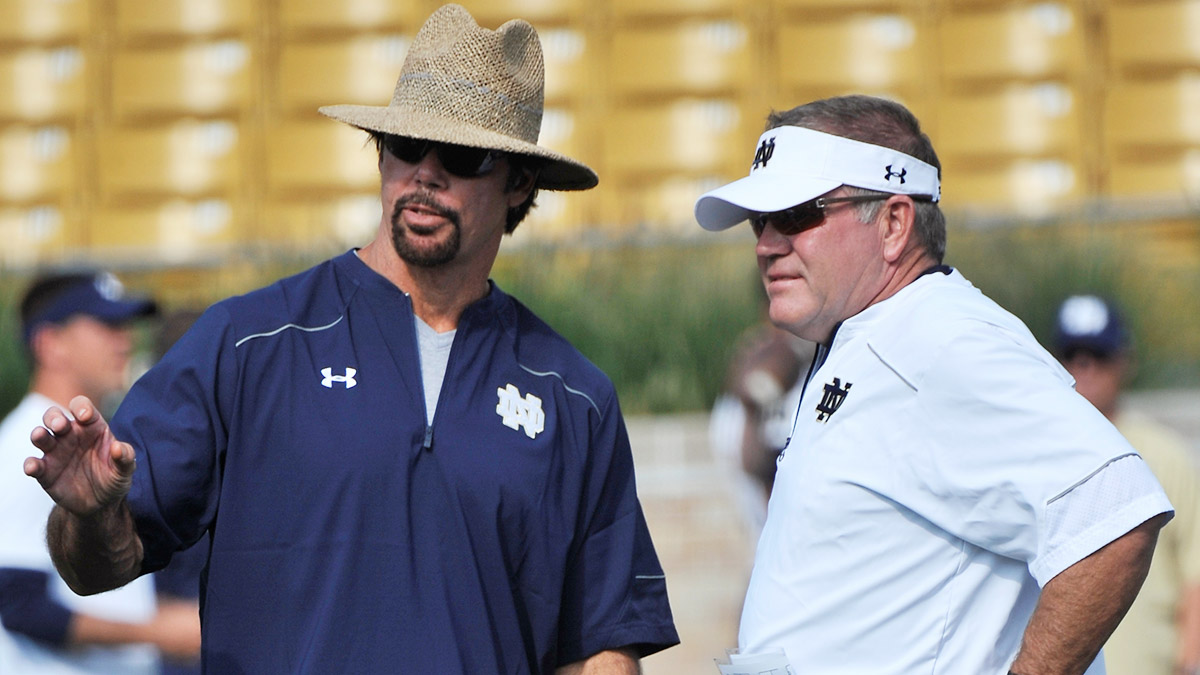 Nobody is visibly having more fun during games than VanGorder himself, but a close second might be Smith, who seems poised to explode into unquestioned stardom under the new system following an offseason shift inside. A consensus blue-chip prospect out of Fort Wayne,1 Smith was anointed a future great long before he set foot on campus. He started every game as a true freshman, and with his new position, he’s now an active factor in every play, where his ruinous speed and more central location on the field have him leading the team in tackles through six games. Like Luke, Smith shrugs off the difficulty of learning a second defensive system under a second coordinator in his second year playing college ball, taking the view that if he could learn a new system once as a freshman, doing it again as a sophomore should be well within his capabilities.

Where he wasn’t raised as a Notre Dame fan, despite growing up in Indiana and attending a Catholic high school. But we imagine that Irish fans will forgive him this transgression.

“The biggest challenge for me has been the vision aspect,” Smith said. “All my career, I’ve seen the game from an outside perspective. Moving inside in the spring really helped to kind of get the jitters out. I’m pretty comfortable now.”

Comfortable isn’t exactly the word we’d choose. There’s a lethality missing from it.2 There’s probably a French word to describe Smith stalking back and forth among the Irish’s front seven before every snap, disguising his assignment and assisting middle linebacker Joe Schmidt in stage-managing the alignments. “He orchestrates everything,” Smith said. “I’m just a facilitator, making sure everything has that cherry on top.

A two-way player in high school, Smith diplomatically avoids overt bloodthirst when asked if he’d like to see some offensive snaps at Notre Dame: “I’d rather initiate the contact.”

“What I wanted to add to my game is to learn how to make others better. Last year, as a freshman, it was just about doing my job and making sure people were able to count on me. Now I’m in a position where I can help others succeed.” 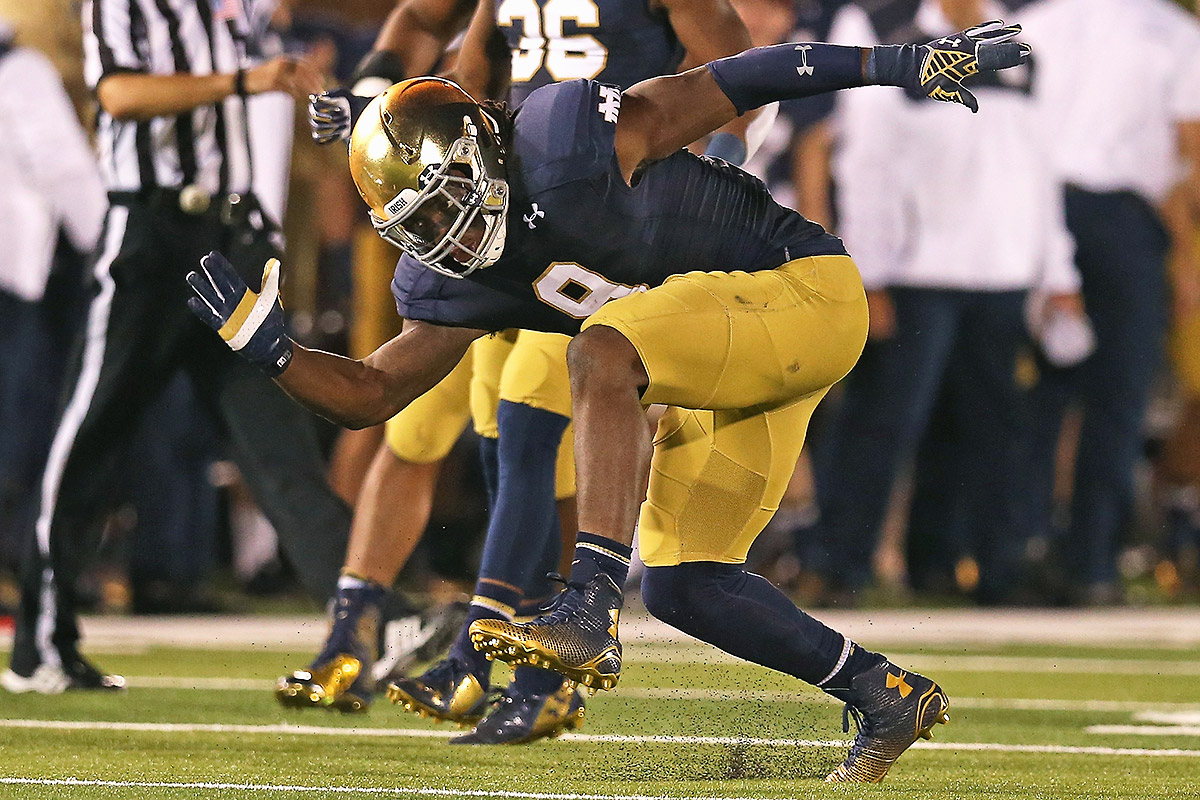 Smith and Schmidt, whose work as a tandem has been praised by Kelly, will have their mental acuities tested to the limits in Tallahassee. Notre Dame may be undefeated, but even with Florida State looking several shades undersaturated with destiny this year, the Seminoles are favored in Saturday’s clash for a reason. This isn’t last year’s FSU team, and not just in a spoonful of coachspeak pablum, IT ISN’T WHAT IT ISN’T kind of way: The Noles of today are helping to highlight the role that injury luck in particular played during last year’s title run.

With that said, Jameis Winston and his offensive orchestra are a massive upgrade over any passing attack the Fighting Irish have faced this season, and Notre Dame, a youthful team on both sides of the ball, will be playing its first non-home game of the season that isn’t staged on a neutral field. The next generation of Fighting Irish defenders has needed to grow up in a hurry, and it’s about to run full-tilt into one hell of an after-school special, starring an FSU offense that doesn’t share Stanford’s proclivity for frittering away its time in opponents’ red zones. The Irish defensive two-deep is overrun with freshmen and sophomores, and all the Irish defenders are playing in their second system in two years.

But you never know. Especially this season, you never know. The Noles are also a turnover-happy offense, and Notre Dame is something of a meme team when it comes to Finding Ways to Win Games.

“I think it’s a part of the DNA that our kids have,” Kelly said after the Stanford win, “that they believe they’re going to win close games.” They Just Keep Finding Ways to Win can be a backhanded compliment to pay a team, implying some level of chicanery. But it’s not a knock, not really. Not as long as the operative word there is “win.”