The NFL’s annual craziness is Indianapolis is upon us and Grantland is there for all (or at least some) of your combine-centric needs.

There’s supposed to be some uniformity to the way players are trotted out in front of the media at the combine. Like the workouts, each day is slated to include specific position groups, but occasionally, some stations in the never-ending car wash of combine week take longer than others. Sammy Watkins talked a day late and was whisked away after only a few minutes. There were meetings to get to.

Teddy Bridgewater was on the other end of the spectrum. He was at the lectern for a good 15 minutes, with a much smaller crowd than the one on hand for Johnny Manziel. Quarterbacks tend to be the dominant personalities in the room, but one of the worries about Bridgewater, who has just about every other intangible trait a team could want, is his not overly magnetic personality.

I can’t speak for everyone else, but I enjoyed what Bridgewater had to say as much as or more than I’ve enjoyed anyone else who talked this weekend. When someone asked if he really was as obsessed with football as was rumored, Bridgewater said that even when he’s playing Madden, he sees it as “mental reps.” It was hard to tell just how serious he was. He didn’t commit to playing with a particular team, and he didn’t say he modeled himself after a particular quarterback, but when asked if he could be any quarterback in history, Bridgewater went deep. “If I could have a career like any NFL quarterback, it would be Johnny Unitas,” Bridgewater said. Unitas also played at Louisville – 38 years before Bridgewater was born.

One of the more memorable lines from the entire weekend came when Bridgewater was talking about his initial recruiting process. He said he told every coach who was wooing him that he had a three-year plan for college: start as a freshman, be all-conference as a sophomore, and graduate as a junior. When he did all that — and more — by the end of this past season, there didn’t seem to be a reason to stay. “I looked back and I asked myself, ‘Was I able to accomplish all of those goals?’” Bridgewater said. “And as I look back, I was. I have my degree, a degree in sports administration from the University of Louisville, I was a three-year starter, won a BCS game, and won conference player of the year.” Soon, we might be adding “no. 1 overall pick” to that list.

Tell Us What You Really Think, Dee 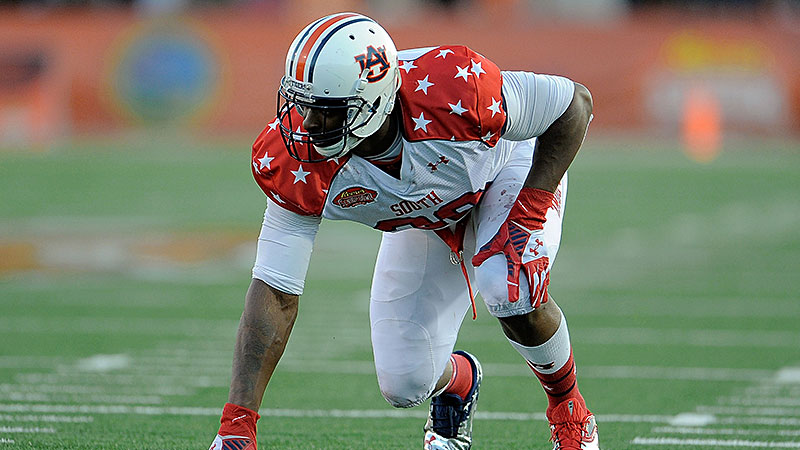 Just about every day of the combine sees one or more players claiming they’re the best (fill in the position) in the draft. It’s less notable coming from someone like Teddy Bridgewater. When it’s Dee Ford, everyone pays a bit more attention.

It wasn’t necessarily Ford’s answer that made people take notice. Sirius XM NFL Radio asked him plainly, “Who’s better — you or Jadeveon Clowney?” and Ford answered like anyone in the process of selling himself would. But he went a step further. “Let’s put it like this,” Ford said. “People like to talk about size all the time. Size is pretty much overrated in my eyes. You can look at guys like Robert Mathis, Elvis Dumervil, Von Miller. These are 6-foot-2 guys and under. People are just looking at the fact that he’s a physical specimen. Honestly if you watch the film, [Clowney] plays like a blind dog in a meat market, basically.”

Ford, as you might guess, is 6-foot-2. The combine is sometimes treated like the beginning of the process, but really, it’s the second major event between the end of the college season and the draft. First comes the Senior Bowl, which typically has significant impact come draft time. Last year’s no. 1 overall pick, Eric Fisher, got there thanks in large part to a great week in Mobile, and this year, Ford was considered one of the Senior Bowl’s big winners. He had two sacks, a deflected pass, and a couple more hurries in the actual game, after looking great during drills the previous few days.

Playing well for an entire season in the SEC is one thing, but shining in a week of work with the best senior prospects in the country can be a confirmation for some guys. Ford is a bit undersize, but his ability to burst off the line of scrimmage is undeniable. It reminds me a bit of Cameron Wake, who has the advantage of being about 15 pounds heavier than Ford. Projections have Ford anywhere from the late first to early second round, but he’s helped himself so far. He’s obviously feeling good about where he is in the process, and it’s hard to blame him. 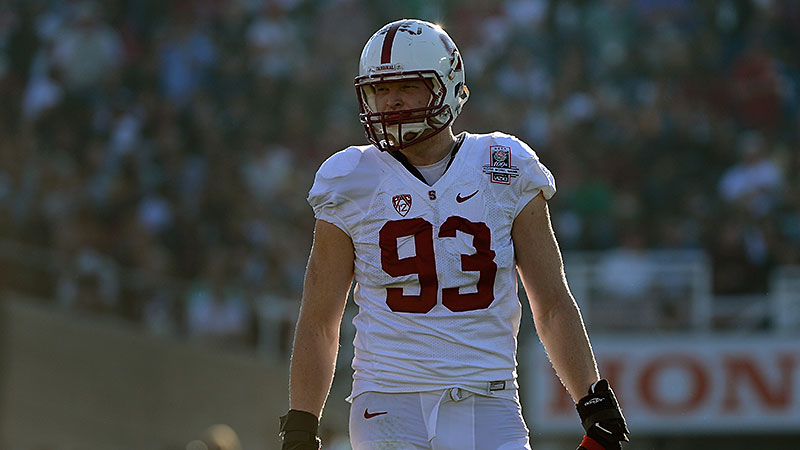 Trent Murphy had a different sort of week in Mobile. A 3-4 outside linebacker at Stanford, he spent most of the Senior Bowl practices at defensive end, where he reportedly had a hard time. Murphy’s eventual role brings up the always tricky topic of what position players should and will play in the transition.

Where about half of the teams in the NFL run at least some 3-4, the defense is much less prevalent in college. Murphy’s time in a defense installed by current 49ers defensive coordinator Vic Fangio, playing a position most college players never get the chance to play, should be seen as a strength by most NFL teams. But that strength is removed if a team asks Murphy to play defensive end. “A lot of the plays I’ve been drawing up for coaches, they’re running some of the same stuff, calling it some of the same stuff,” Murphy said. “It’s a huge advantage.”

Most combine interviews for fairly established players eventually include a question about an apocryphal story well known to local media but new to the folks learning about these guys for the first time. Murphy’s was from high school, when, the night before a game, he was seen doing up-downs at midfield of the opposing stadium.

He’d gotten the idea from a particularly intense assistant coach, who said a former player had pulled a similar stunt years earlier. “I was like, well, I have to be at least as tough as that guy,” Murphy said. It was only after he’d done it that Murphy realized the original story wasn’t true. His coach had made it up. “I wasn’t really surprised,” Murphy said. “He also used to tell us how cool it would be if you ran yourself so hard in conditioning, you passed out. He’d say, ‘You’re going to pass out before you die, and think about it: If you did die, how cool would it be to have that on your grave: Little Johnny ran himself to death’?” Football attracts some different kinds of people. 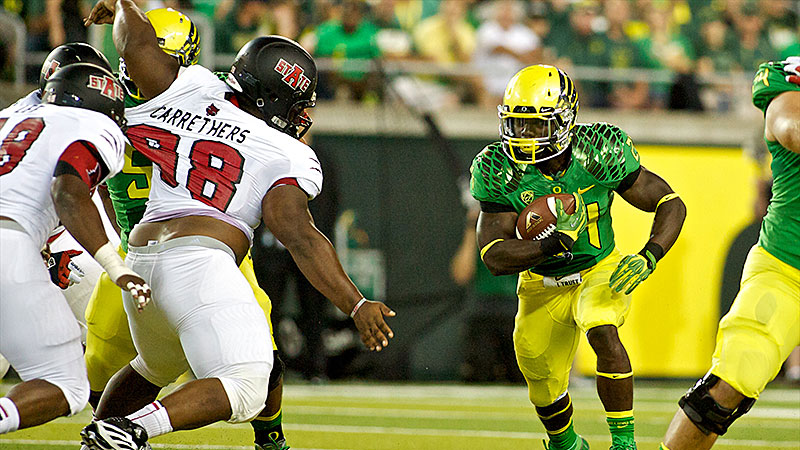 Who Is He? Ryan Carrethers

Where Is He From? Arkansas State

His Game in 25 Words or Fewer: A mammoth late-round nose tackle prospect who was an oddly prolific tackler (more than seven per game) in his senior season

Fact of Note: Before last season, Carrethers got a coveted spot on Bruce Feldman’s annual (and always fun) Freaks List, which counts down the 20 craziest athletes in college football. Carrethers had a reputation as a weight-room monster; he apparently squats 660 pounds. He was also a tackling machine, especially for a 330-pound nose tackle. Against Louisiana Lafayette, he had 16, and for the season, he averaged more than seven a game.

Why You Should Know Him: Carrethers was sitting at one of the tables on the other end of the room from Michael Sam’s press conference. There were maybe three people sitting around asking questions, one of them being a videographer wearing a polo shirt emblazoned with a Ball State logo — the team Arkansas State played in its bowl game this year. With just a couple seconds left in that game, Ball State had a chance at a 38-yard field goal to tie the game, but just after the ball left the kicker’s foot, it met Carrethers’s hand. The kick was blocked, and the game was over. “It was crazy,” Carrethers said at the time. “I’ve never experienced anything like that. To put everything on the line and then come through like that — it was an amazing feeling. I couldn’t have written it any better.” When a reporter asked Carrethers about his favorite football moment, he brought up that block.

The scene was a perfect reminder that wedged between all the monumental stories — and Sam’s is monumental — the draft is a culmination for hundreds of smaller ones that mean everything to the people who’ve lived them.

Dri Archer was also on Feldman’s list before the season, and coming into yesterday, he was considered by many to be the favorite in the 40-yard dash. Archer looked fast enough to make Chris Johnson, who still holds the combine record, a little uneasy. Archer’s 4.26 missed by .02 seconds, but I’m guessing he’s still pretty pleased. 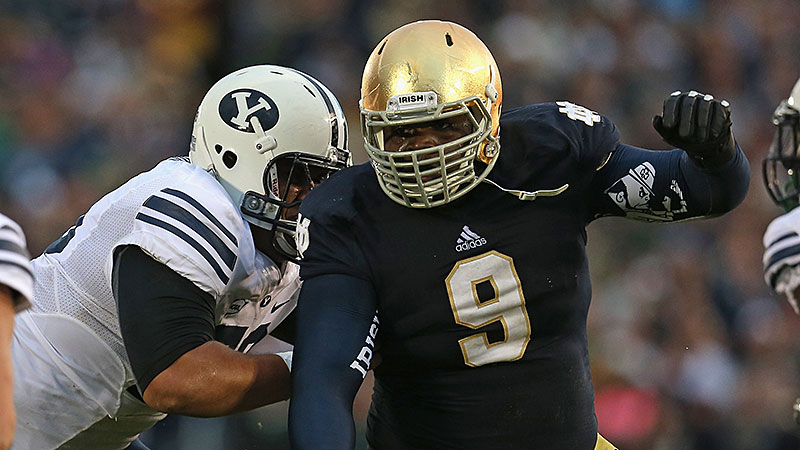 Louis Nix, formerly of Notre Dame, is the owner of an all-time great athlete Twitter: It links to this video, proof that Torii Hunter Jr. is on Earth’s squad if we’re ever forced to play beer pong for the planet, and its background promotes autism awareness. It was almost a guarantee that his time at the lectern would be one of the more entertaining parts of the weekend.

On losing 23 pounds in training for the combine: “I enjoy my weight. But people wanted me down, so I lost it. My stomach doesn’t stick out as much. That’s nice. I just feel sexier.”

On how losing weight has helped on the field: “I think I can wiggle a little bit. I have dance moves. That should prove a lot.”

On his previously injured knee: “How’s the knee? It’s fantastic. How’s your knee?”

On his Twitter persona: “I don’t how coaches will take it, and if they don’t like it, I’ll get off of it. I take pride in it. People love me, I love people, and I just like to entertain a little.”

On what foods he’s had to cut out: “I’d say Five Guys. I enjoy my share of Five Guys and Cajun fries, but I’m starting to like salads now.”

On his favorite salad dressing: “No dressing. I eat it like chips.”