Joakim Noah led the Bulls over LeBron and the Heat on Sunday, but anyone who watched the game knows Joakim’s father, Yannick, was the one who really won the day. Yeah, this guy. 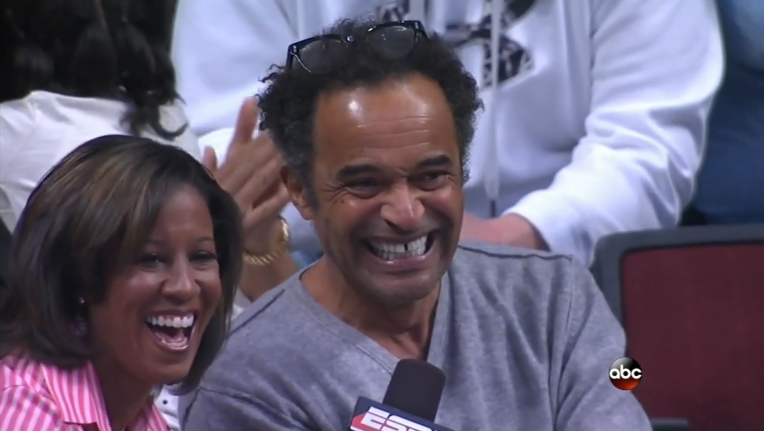 Before Yannick was SportsCenter-famous for being a father, he was famous-famous for being himself. He is the only Frenchman to win the French Open at Roland Garros since 1946. “His victory was like an explosion,” another French player, Henri Leconte, remembered. Noah beat Mats Wilander, the defending champion, to win the title. Later, Wilander said it hadn’t hurt to lose that match. He liked Noah too much. “Yannick was just … different,” Wilander later said. “Everything he did, he did it with passion.”

As a 23-year-old champion, Noah had dreadlocks and a gap-toothed smile. He was born in France, but had spent time as a kid in Cameroon, where his father, a professional soccer player, was from. There, he’d played with a wooden racket made from a wooden board. Arthur Ashe had seen him play when Noah was 11, when Ashe was on a State Department goodwill trip to Cameroon. Ashe helped Noah launch his career. Noah helped Ashe launch change. In an essay in an issue of L’Equipe dedicated to Noah in 2006, Ashe’s widow, Jeanne Moutoussamy-Ashe, wrote that one of her favorite memories was watching Noah and Ashe play doubles together at Wimbledon in 1978. Wearing their regulation whites, they had faced white players from South Africa and Rhodesia. “What a symbol!” she said. “It was just a tennis match, but no one present could forget the questions it reopened.”

Tennis had not been a sport very open to “different.” Now French players are known for their flamboyant style. But it wasn’t like that in Noah’s day. “I often felt I had to fight a mindset that didn’t suit me. French sport at that time lacked a lot of imagination,” Noah told L’Equipe in the special issue. “It was very rigid and traditional. There were a lot of people who would have liked me to be like Ivan Lendl — a monk-soldier of tennis, obsessed and sad.”

When Yannick won at Roland Garros, his father, the soccer player Zacharie Noah, was the first to push his way onto the court and hug him. Thirty years later, Yannick remembered that moment. “It’s funny to think that such a personal moment with my father is also part [of] everyone’s memories in France,” he said to a writer from the Roland Garros site. History works in funny ways.