Pick a Lion, Any Lion

The Packers did the boat racing yesterday, but in some ways, Detroit’s four-point win over Miami was just as impressive as Green Bay’s 41-point thrashing of the Bears. For Detroit, getting back to (relatively) full strength helped. Megatron hasn’t been Megatron for about a month, and the Detroit offense has limped along without him.

Well, Calvin Johnson is back — to the tune of seven catches, 113 yards, and that.

Coming in, these were possibly the two best defenses in the league. For most of the afternoon, they looked like them. But in the end, Detroit’s won out, in part because the Lions had the best defensive player on the field. Suh was unstoppable against Miami. As a pass-rusher, against the run — it didn’t matter.

He’s an All-Pro every game, every season, but yesterday — a sack, three tackles for loss, three more QB hits, and creating havoc all over the Dolphins’ offensive line — was his best game of the year, and among the best of his career. He was on a different planet. Miami’s only touchdown came on a 3-yard drive, following a blocked punt the Dolphins returned inside the Detroit 5. They did nothing all day.

Bell didn’t light up the box score or anything, but the shot he put on Cortland Finnegan early in this game was in line with the tone with which Detroit — well, its defense, mostly — has played most of the year.

Even in a game without many points, this looked like a game between two very good teams that deserve to be around come the playoffs — the urgency, the hitting, how each defense covered ground. It felt like the best game of the early afternoon, right from the start.

It’s been a tough year for Matthew Stafford, especially when he’s had to go for stretches without Calvin Johnson. For veteran Stafford-watchers, the Lions’ 74-yard, game-sealing scoring drive was a source of both inspiration and frustration. For years, we’ve seen evidence that Stafford has football like that in him. It has just been a question of whether he can summon it on a consistent basis.

At least two throws in that sequence — including the game winner, a ridiculous half-sidearm, half-submarine flick to Theo Riddick up the left sideline — are the kind maybe two or three other guys on earth can make. And with Johnson and the way Detroit’s defense is playing, maybe one of those every so often is all the Lions need from Stafford.

Yards aren’t enough for Marshawn Lynch. Never have been. He doesn’t just want touchdowns (although he did happen upon four of them yesterday). He wants your will, and he wants it in a jar on his mantel.

Lynch converted the Giants defense to liquid form, putting up 140 yards on 21 carries (and those four touchdowns). There are areas where Seattle has taken a step back this year. Running the ball isn’t one of them. The Seahawks came into yesterday’s game as the most efficient running team in football. Russell Wilson — who had his own 100-yard game yesterday — is a big factor in that. But credit to Lynch: All he has done is pick up where his ridiculous 2013 left off.

The early part of Jaiquawn Jarrett’s career went south about as quickly as a career can for a second-round pick. After the Eagles took him 54th overall in the 2011 draft, he started two games as a rookie before being released prior to his second season.

He played some scattered snaps at safety for the Jets a year ago, and for the first nine weeks of this season, he held a similar, fill-in role. Until Sunday, that is. In his first start, Jarrett was everywhere for the Jets. Ben Roethlisberger came into the game with three interceptions on the season. Jarrett picked him off twice. Jarrett had a sack, two more quarterback hits, and 10 total tackles, and he came away with one of Antonio Brown’s two fumbles. In the best game of the season for the Jets defense, Jarrett was its best player, and even if he never has another day like yesterday, a bit of redemption had to feel good.

I hope Jerry Jones has his checkbook handy.

Last week, Dez Bryant ditched his agent and signed with Roc Nation, Jay Z’s sports agency, which also claims Kevin Durant and free-agent-to-be Ndamukong Suh as clients. Because Brandon Weeden was playing quarterback for the Cowboys last week, Bryant had to wait a few days for his Give Me All the Money game. We got it yesterday.

Dez racked up his 158 yards and six catches in the first half, before spending the final 30 minutes of the Cowboys’ blowout win smirking, riding the stationary bike, or doing both.

The NFL’s greatest receivers each bring a little something different to the table, but for the most part, they’re tall, graceful, fluid athletes who make catching a football somehow look beautiful. Bryant is an exception. He makes it look brutal. Whether it was on his rampage of a 35-yard touchdown off a screen pass (which left half a dozen Jaguars disposed to the turf), his get-off-me 68-yard score, or the unstoppable back-shoulder throws that will forever populate Dwayne Gratz’s nightmares, Bryant was an absolute monster.

The Cardinals and Dolphins As Dark-Horse Contenders 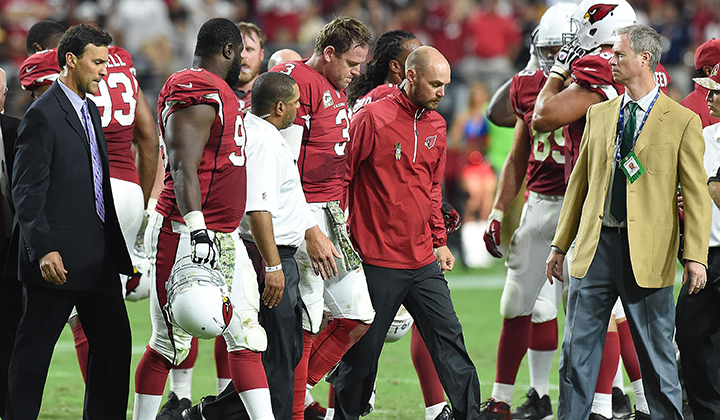 The Cardinals are the NFL’s Rasputin. Arizona won again yesterday, thanks to John Brown continuing to be a mythical creature and some late piling-on defensive scores, and Miami had a reasonable showing against the league’s best defense on the road.

The losses came when the games were already over. Carson Palmer, he of the new three-year contract extension, is likely done for the season with a torn ACL. Bill Barnwell already got to some of the financial ramifications there, but the football issues are just as depressing. Arizona is 8-1, and although any stat ever conceived pokes holes in that record, this team was legitimately frightening. Without Palmer, the Cardinals get much less scary. Drew Stanton has played admirably in Palmer’s absence, but Arizona’s ceiling without its starting quarterback takes a serious hit. Palmer currently ranks 10th in QBR. He was completing 63 percent of his passes. Even if the extension was ill-advised, it happened because Palmer was playing well — or at least well enough to win. Stanton can’t consistently do that.

The Dolphins also saw a key player go down with what looks like an ACL injury. A key to Miami’s offensive competence this year is how much better it got on the offensive line over the offseason. The man behind that improvement was Branden Albert. The Dolphins’ new left tackle was halfway through what’s been the best season of his career. That season is over. Miami’s defense is good enough to keep it hanging around, but at 5-4, and with a head-to-head loss against Kansas City already on the team’s résumé, Albert was the type of player the Dolphins couldn’t afford to lose as they hit the home stretch. 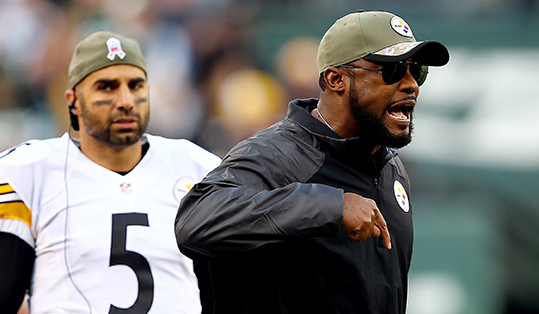 It’s not Tomlin’s job to hang on to the ball, but after two weeks of blowing good teams away, Pittsburgh laid an egg against a one-win Jets team while ceding first place in the division. On top of the turnovers, the Steelers just seemed like a mess.

Depending on whom you want to believe, James Harrison should or should not have been in the game on a goal-line play that involved Roethlisberger throwing an incomplete pass to a 36-year-old linebacker while the best receiver in football stood on the sideline with his helmet in his hand. Later on, the Steelers decided to kick a field goal from the 5-yard line while down 17 at the start of the fourth quarter. Shaun Suisham missed it.

So far this year, the Steelers have annihilated the Ravens and Colts, gotten blown out by the Browns, squeaked by against the Jaguars, and lost to two teams with a total of one win against opposition not named the Steelers. Anyone who wants to figure Pittsburgh out, let me know when you do.

The Bills’ typically destructive defensive line didn’t play poorly yesterday — just the opposite, actually. Buffalo’s front beat up the Chiefs: six sacks, 10 hits, while also holding Jamaal Charles in check for most of the day. It’s because of how well the Bills’ line played that losing the game — and some very valuable ground in the wild-card race — hurts so much.

Two plays in a span of barely five minutes may have sunk the Bills’ entire season. A fourth-and-1 at the beginning of the fourth quarter ended in a 39-yard Charles touchdown. And after forcing a three-and-out on Kansas City’s next possession, Leodis McKelvin botched a punt return that gave the Chiefs the ball at the Buffalo 26. In about 12 plays, 13-3 became 17-13 the other way. The Bills defense just deserves better.

Everything About the Chicago Bears 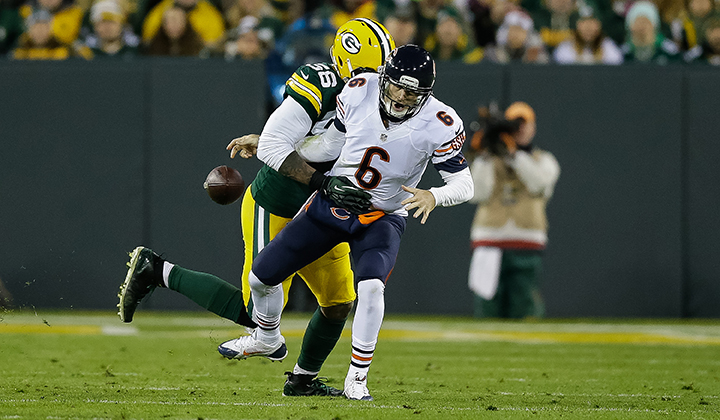 There was always a chance that the Chicago defense, despite all of its new pieces, could turn into a train wreck. The unit was a disaster a year ago, and one-year, free-agent quick fixes rarely turn out the way they’re sold.

Last night was about more than a lack of talent. It was an embarrassment. Pick a play — Jordy Nelson’s first touchdown, Eddie Lacy’s screen pass/waltz to the end zone, Jordy Nelson’s second touchdown. Aaron Rodgers may be an actual fire-breathing dragon, but no NFL defense should be giving up six touchdown passes in a half. It shouldn’t matter who’s playing quarterback.

Sadly, who’s playing quarterback for the Bears matters very much. If the defense always had the potential for implosion, Chicago’s offense was supposed to have solidified. Last season, Marc Trestman, a new offensive line, and maybe the league’s best collection of weapons helped Josh McCown put up the league’s best QBR and turned the hapless Bears into the sixth-most efficient offense in football. Even those who don’t enjoy the charms of the Cutler Coaster thought the Bears would boast one of the league’s most potent attacks.

That offense is nowhere to be found. The Bears came into yesterday’s clowning ranked 14th in offensive DVOA. They’re average, and the way this team is built, average just isn’t enough. The big plays, the fireworks, the feeling that came with watching Chicago’s offense last year — it’s all gone. Injuries have played a part. The offensive line has been banged up. So has Brandon Marshall. But that’s nowhere near a justifiable reason for how the Bears have looked.

After a two-game stretch like the one Chicago has had — back-to-back games giving up 50-plus points, while failing to score many of their own — everything about a team gets called into question. Framing Cutler’s offseason extension as a $127 million deal is silly, but it is a $54 million one. It would cost the Bears dearly if they tried to get out in under three years. A season removed from Trestman being touted as a franchise savior, people are already trying to send him back to Canada. There’s no shame in having to start over in the NFL. The shame is in having to tear down what some thought was the finished product.