Aside from being the stretch of the calendar for never-ending optimism, OTAs actually do serve a purpose. That purpose, and how important these pre–training camp sessions are, shifts from team to team. Tom Brady is more than a decade into running some version of the same system. I’m guessing he’s got it down by now. Where OTAs matter most is for teams just wading into a new offense or defense — new alignments, new terminology, new responsibilities, and new habits. It would make sense that those teams could use a little more time.

As a quick refresher, we decided to break down five notable scheme changes and what they might look like in 2014.

When Atlanta’s coaching staff called for its base defense this week, the Falcons lined up in a 3-4. Unlike some of the others on this list, that isn’t technically a change. Mike Nolan ran plenty of 3-4 in Atlanta last year, and Mike Smith was adamant earlier this offseason that the Falcons’ defense wasn’t undergoing a drastic change.

The reason for speculation about the shift was Atlanta’s free-agent strategy. Tyson Jackson, signed away from Kansas City, has played his entire career in a 3-4 — first in Romeo Crennel’s two-gap system, then (and more effectively) in Bob Sutton’s attacking one-gap version. Paul Soliai got a healthy five-year, $33 million deal to come over from Miami and hold down the middle of the Falcons’ defense. The Dolphins have used a lot of 4-3 in the past two seasons, but Soliai has plenty of experience lining up as a nose tackle and making life hard for centers.

Last year, Atlanta’s 0-technique — when it used one — was 294-pound Corey Peters. Soliai weighs in at about 340. He looks the part of a 3-4 nose in the way Peters didn’t. The same goes for the rest of the Falcons’ roster from a year ago. Most of the starters on their defense, like Peria Jerry and Osi Umenyiora, had been drafted and used as 4-3 pieces for their entire careers. When the Falcons lined up in odd fronts a year ago, they did it as an even-front team looking for something different. This year, they have the pieces to make those fronts look the way we’re used to seeing them, including second-round pick Ra’Shede Hageman. The Minnesota product’s hot-and-cold approach made him the 37th pick in the draft, but at his best, Hageman is a 6-foot-6, 310-pound marvel who could play all over the Falcons’ varied defensive line. For the first time, the Falcons are going to be identified as a 3-4 team, because this is the first time they’ve looked like one.

Other notable scheme-based moves: promoted Mark Collins to outside linebackers coach (a typical role for 3-4 teams); drafted OLB Prince Shembo in fourth round (Shembo has experience playing in a 3-4).

The 3-4 versus 4-3 conversation has also been happening in Detroit over the past few months. New defensive coordinator Teryl Austin spent the past three seasons as the defensive backs coach in Baltimore — a team typically considered to have a 3-4 base defense — but he’s said the Lions will continue to use a 4-3 as their base defense. That makes sense, considering the majority of Detroit’s roster was put together with the 4-3 in mind. With almost no cap room, the Lions didn’t have a chance to add many pieces to the defense in free agency, and trying to instantly shift a team full of 4-3 players into a 3-4 base defense would be painful. But that doesn’t mean this year’s defense is going to look like the straight-ahead approach typical under Jim Schwartz.

“I think it’s important that you give different looks, give them different ways to block, give them problems in both the run and the pass,” Austin told MLive.com in January. “I think it’s detrimental to your defense if you line up in one thing and they know exactly where you are every time and how they are going to block you every time.” 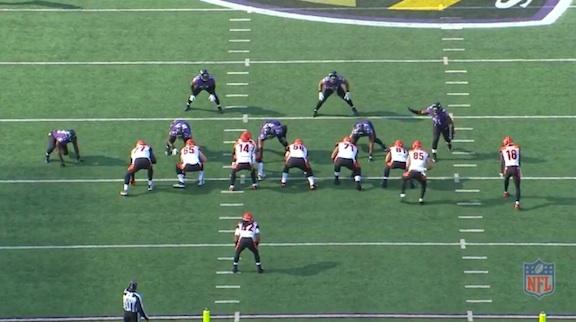 Like with most teams that run a 3-4, Baltimore ran a variety of fronts last year. This is the first play from the Ravens’ Week 10 game against the Bengals. Terrell Suggs is typically known as an outside linebacker, but on this play (and many others) he has his hand on the ground as a right defensive end. Baltimore’s other three linemen are lined up in traditional 4-3 spots: 3-technique on the outside eye of the guard, 1-technique shaded to one side of the center, and the opposite defensive end just outside the right tackle. This is just an over 4-3, with outside linebacker Courtney Upshaw playing down near the line of scrimmage.

In years past, a key distinction between 3-4 and 4-3 teams was the task given to defensive linemen. A player positioned head-up over offensive linemen in a 3-4 was asked to play the gap to either side of him, controlling the blocker as opposed to one particular lane. That distinction has faded. Even in its 3-4 looks, Baltimore rarely asked its players to play more than one gap. Anyone worrying that Ndamukong Suh is going to be stuck eating blocks instead of terrorizing quarterbacks should breathe easy. The Lions are going to do a lot of what we’ve seen them do. It’s just going to be a little more complicated.

One piece aiding that complication is second-round pick Kyle Van Noy. For a team looking to do more things defensively, the BYU outside linebacker is a perfect piece. He did a bit of everything in college — drop back in coverage, rush the passer, hold the edge. Expect him to be standing in the same spot Upshaw is in the photo above. He has a chance to be the player who lets the Lions actually realize their hope of being a truly multiple defense.

Other notable scheme-based moves: signed DL Vaughn Martin, who has experience in a 3-4 with San Diego; signed S James Ihedigbo, who played for Austin in Baltimore.

It would probably be more fun to speculate what the J.J. Watt–Jadeveon Clowney combination is going to look like, but I’m worried that pairing warrants so much ingenuity that we’d have a hard time even guessing at this point. The Texans are likely going to stay a base 3-4 team, with both Watt and Clowney moving around the formation and causing destruction. That’s probably all we need to know at this point.

Houston’s radical change is coming on the other side of the ball. After seven years of Gary Kubiak and his zone-based system, the Texans are finally looking at a new offense. Bill O’Brien’s last stop as a pro coach was as the Patriots’ offensive coordinator in 2011, the height of the two–tight end days in New England.

It wasn’t a surprise, then, to see the Texans take Iowa tight end C.J. Fiedorowicz in the third round. Recently re-signed Garrett Graham has the inside track at the move tight end role in O’Brien’s offense, but based on the blueprint he had in New England, the Texans needed a player like Fiedorowicz. Rob Gronkowski’s receiving totals get the most attention, but at 265, he’s also a hellacious blocker. Fiedorowicz has almost the exact same build. According to Football Outsiders, the Patriots used two tight ends on almost 75 percent of their plays in 2011. That should be a staple of the Texans’ new offense.

The Texans’ other highly drafted offensive player also bears a striking resemblance to one of O’Brien’s former stars in New England. Xavier Su’a-Filo’s (6-foot-4, 307) combine measurements were the exact ones Logan Mankins had in 2005, and when Su’a-Filo was asked to compare his game to a current pro, he went right to Mankins.

“He’s big, he’s strong, and he’s mean,” Su’a-Filo said at the combine. “When he gets there, he gets there in a hurry, and he tries to punish people. Coach Belichick, who’s very well respected in the league, once said, ‘There’s tough guys in the league, and there are legit tough guys, and Logan Mankins is in the latter category.’ To me he is what a prototypical guard should look like, play like, and should act like.”

Under Kubiak, Houston’s offensive line favored the ability to move over anything else. Su’a-Filo is the perfect addition for the man-based blocking schemes that will be sprinkled in with O’Brien’s offense. He’s a bad dude.

Other notable scheme-based moves: drafted NT Louis Nix in the third round (is the ideal 3-4 nose and has experience in a 3-4).

Mike Zimmer’s scheme shouldn’t look drastically different from the one Leslie Frazier used in Minnesota, but there is one quick note worth addressing. When the Vikings picked Anthony Barr ninth overall last month, it was a surprise to most. A pass-rusher wasn’t near the top of Minnesota’s list of needs, especially after it parked a Brinks truck in Everson Griffen’s driveway in March. There was also a question of what role Barr would play in Zimmer’s defense. A 3-4 outside linebacker in college, Barr had been linked to teams needing a stand-up rusher in the run-up to the draft, and Minnesota isn’t one of those teams. 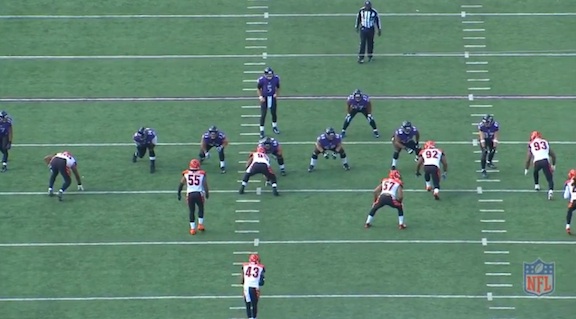 But Zimmer’s defense has a couple more layers than most people give it credit for. This is a third-and-long against the Ravens from last year. Michael Johnson (whom the Vikings chased in free agency) is lined up with his hand off the ground at right defensive end, with James Harrison also near the line of scrimmage one man over. It’s a look the Bengals used often in nickel situations last season, and it would be easy to envision Barr playing the Harrison role — situational matchup problem — as he tries to find his grasp on the defense.

Other notable scheme-based moves: signed DT Linval Joseph and DE Corey Wootton in free agency and drafted DE Scott Crichton in the third round (Frazier was notorious for a lack of rotating among his defensive linemen; Wootton is a player who can play both inside and out, and the Vikings should see at least seven players get significant snaps on the defensive line).

Houston’s loss is Baltimore’s gain with Gary Kubiak. The Ravens were a zone-based team in the run game before Kubiak arrived, but his collection of bootlegs and waggle plays will be a new look for Joe Flacco & Co.

The most obvious move is a typical one for coaches entering new situations: bring your guys with you. Owen Daniels has been successful for a long time in Kubiak’s offense, and he should help in easing Flacco’s adjustment. Daniels and Dennis Pitta are ideal fits as middle-of-the-field targets in the play-action game. Steve Smith isn’t Andre Johnson, but he’s a very good complement on the other side of Torrey Smith. An underrated route runner and still a solid option in traffic, Steve Smith isn’t the deep threat he once was, but he’s a good piece in an offense that values reliability in its receivers over anything else.

Another NFC South import who didn’t get nearly the same attention but will actually play a much bigger part in whether the Ravens can turn their offense around is Jeremy Zuttah, who was obtained in a trade with the Bucs. In his first six years in the league, Zuttah moved between guard and center, often as a backup. He was never a good match for Tampa Bay’s man-based blocking scheme, but as the new starting center in Baltimore, he’s a perfect fit. He moves extremely well, a necessary trait for anyone playing center in Kubiak’s offense. Zuttah is only 28, and the Ravens managed to grab him for a fifth-round pick. That could be a steal, and one an offense that ranked last in rushing DVOA badly needed.

Other notable scheme-based moves: signed RB Justin Forsett, who has a lot of familiarity with Kubiak’s offense.