If you ask Carmelo Anthony where he places himself in the NBA constellation, he’ll tell you he’s the most underrated superstar. Maybe. He’s definitely the weirdest superstar. As a scorer, he’s phenomenal, but as a helpful player within an offensive system, his virtues are less apparent. Last season, Anthony was the central weapon on a comically suffering basketball team that was plagued by a glaring lack of ball movement. The numbers back that up: On offense, last season’s Knicks moved less than any other team, and they also ranked 28th in total assists.

Some of that had to do with Mike Woodson’s coaching, but Anthony has to shoulder the blame too. If it’s true that the cultures of basketball teams mimic the traits of their leaders, last year’s ball-hoggish Knicks played much like their superstar forward. Anthony may be one of the most creative and dominant scorers in the league, but unlike the league’s other great scorers, he hardly ever creates buckets for his teammates. This was on full display that January night at Madison Square Garden when he scored an incredible 62 points against the Bobcats. He had 0 assists.

Enter Phil Jackson and Derek Fisher. The duo who worked so well together in Los Angeles (as coach and player, respectively) are trying to turn the Knicks around. It’s a chore that begins with Anthony and that pervasive stickiness. Last month, in a conversation with the New York Post, Jackson addressed this exact thing:

“That’s where Carmelo’s gonna move forward this year in that situation — the ball can’t stop. The ball has to continually move.”

That’s where the triangle offense comes in. Jackson and Fisher’s preferred system relies on the exact kind of cooperation that’s been absent in Manhattan for so long. Jackson is arguably the most luminous mind in NBA history, and has an impressive résumé of engineering great offenses around superstar centerpieces. He better. It’s gonna take all the Zen in SoHo to design a pass-happy offense around Anthony, the NBA’s crown prince of the unassisted midrange jumper. 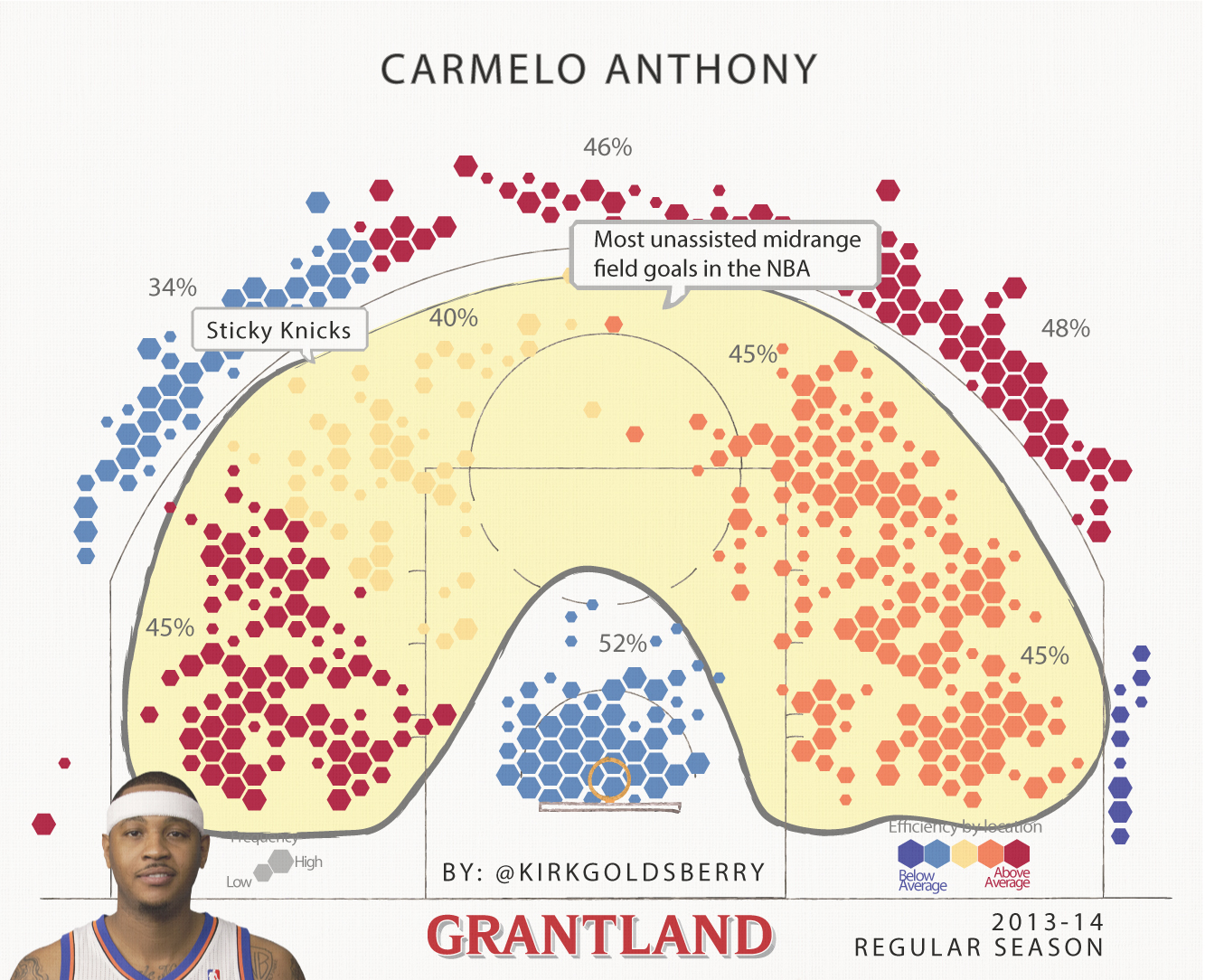 The graph below shows assist percentages for every NBA scorer that converted at least 200 field goals last year. I’ve included labels for some of the league’s most prominent players. Immediately, you see that the league’s best scoring point guards all appear on the left side, and the catch-and-shoot specialists appear on the right.

There’s Anthony, just next to many of the league’s point guards. That’s not that weird, except he doesn’t do that other thing that point guards do: make plays for his teammates.

Unassisted field goals are revealing, in part because they expose which of the league’s scorers are capable of beating NBA defenses by themselves — a skill that separates the bourgeois superstars from its role-playing proletariat. Players who can single-handedly generate offense tend to be really important in the league’s biggest moments.

Here are the top-five unassisted producers from last season:

Here are the players with the most “baskets created” from last season:

Anthony slips in this second list. More than any other player in the league last season, Anthony possessed a do-it-yourself scoring mentality. You can see it manifested here:

Last season, Anthony was the only high-volume basket creator in the NBA much more likely to log an unassisted field goal than a conventional assist. Was that down to Anthony’s basketball temperament or his coach’s tactics? Either way, it should be irrelevant to Jackson and Fisher. Those tendencies need to change.