Andrew Sharp: At least once during every Bucks game, it’s important to imagine what the future looks like. In the right light, you can watch this team and see the young Thunder from five years ago, full of limitless, diabolical potential. Then, you look again, and they remind you more of the mid-2000s Hawks — that team with four 6-foot-8 tweeners and no plan. The Bucks will trick you over and over again. That’s what makes them fun.

Every night, the scoring comes from someone new, the offense looks completely different, and you never know which lineup will close out the game. In Game 4 against the Bulls, Michael Carter-Williams was glued to the bench for all but 12 seconds of the fourth quarter. In Game 5 last night, he finished off the Bulls with 22 points, nine assists, and eight boards. Where did THAT come from? Which version of MCW do we trust? That’s the Bucks.

Sometimes Giannis looks sheepish, such as when he was silenced by Jimmy Butler, and sometimes he glides through the lane for a layup that’s impossible to block and mean-mugs back down the court.

This is the team that’s figuring this out as they go. Everybody plays their ass off for Jason Kidd, and sometimes it’s ugly — usually it’s ugly — but somehow it has worked. That’s a good sign, right? They are already so far ahead of schedule that you can’t help but wonder what will happen when their time arrives.

Maybe they’ll turn into the Hawks, but there’s just as good of a chance that we’re watching a team barely scratching the surface. After all, it’s easy to find one or two extra shooters. It’s hard to find human cheat codes like Giannis, or perfect role players like Khris Middleton. And what will happen when Jabari Parker comes back? What will happen when O.J. Mayo turns into someone who’s not O.J. Mayo?

All we know for now is this team has pushed the Bulls further than anyone thought possible, including last night’s 94-88 win. Next season, Middleton’s max contract will be plenty affordable with the new cap, and if Giannis and Jabari turn into real scorers, this could all get very, very mean. Until then, we’ve got Giannis’s angry face putting a scare in Chicago. It’s fun to watch them pretend.

And Let’s Not Forget Zaza

Why Come Here Then?

The Harden They Come 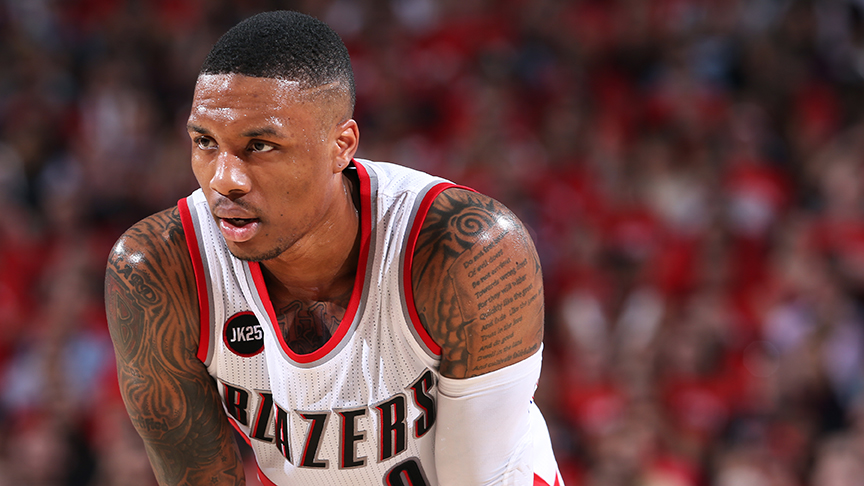 Chris Ryan: Damian Lillard looked possessed at the end of last night’s game. He scored 32 points, 12 coming in the fourth quarter, and two with about eight seconds left, as he made a pair of free throws while Zach Randolph talked some undoubtedly profound trash to him. Dame’s Mr. Big Shot credentials are not in question. But even his late-game heroics last night, in a must-win Game 4 against Memphis — which the Blazers did win, 99-92 — couldn’t wash away the mediocre totality of his performance.

You may have heard, but let me just be the latest to mention the increasingly obvious: Damian Lillard is a problem on offense, but he has a problem on defense. When possession changes hands … there’s some sort of transformation. I don’t mean to get mystical, but this guy turns into the opposite of a werewolf. How can someone so focused, so confident, so aggressive, and so lethal on one end of the floor become so absentminded and uninterested on the other? Maybe the two are related. Lillard seems to think so. A couple of weeks back, while bristling at the idea that he was a lousy defender, Lillard had this to say to The Oregonian:

“I’m not looking for an excuse or a cop out,” Lillard said. “But it’s hard. It’s tough to be a playmaker and have to score points and come off pick and roll and make cuts … all that stuff is hard to do that then go down here and chase guys. But I take a lot of pride in being able to do that. I understand that my team needs me to do that.”

Maybe the absence of Wesley Matthews just pulls Lillard’s defensive failings into that much clearer focus. Maybe the every-possession-matters stakes make his mistakes that much more pronounced. Just check out the below moment, captured by the excellent follow @bballbreakdown:

The streets of Vine are littered with moments like this. That play happened in the third quarter, but Lillard was getting embarrassed all game — losing track of Courtney Lee’s not-exactly-Redickian runs around the floor, getting blown to pieces on screens while chasing after Beno Udrih, and just generally not being able to hang with Nick friggin’ Calathes.

Dame has become what James Harden was last season: an offensive weapon whose lackadaisical defense has become so glaring that it almost detracts from all the points and assists he pours in. Lillard is now under the basketball microscope. And like Harden, he’s going to have to polish his defense up to at least a mediocre shine if he ever wants to shed the rep of being simply a one-way player.

One Foot in the Grave …

Sharp: AND ONE FOOT ON ATLANTA’S NECK.

(Was that real, or some kind of NBA TV hallucination?)

Of Course the Caps Won