(GIFs by HeyBelinda)
Earlier this week, one of our copy editors asked me my thoughts on the idea of the Clippers replacing the Lakers as Los Angeles’s basketball team. I told him that I was ignoring it. He answered that if he wasn’t sure that I was a Lakers fan before, he sure was now.

But after last night’s games, I think it’s finally time I turned to face the music and the emergence of this “new” Lob City team.

My night started off with the grand ol’ purple and gold, and before the first quarter had even ended, I felt the need to change the channel. I couldn’t watch the team anymore — it was much too painful to see players jacking up stupid shots, and I was getting tired of waiting for the team to “jell together” and tired of waiting for players to return to their full pre-injury form.

I flipped back to the game after halftime and witnessed yet another last-minute loss. Even Kobe couldn’t save the Lakers now. I had been in denial that the season was slowly going down the toilet, and maybe still am — I still think the Lakers will eke out a record good enough to make the playoffs, even though their chances right now are less than 50 percent.

Saddened by the loss (nothing I’m new to this season), I changed the channel to catch a glimpse of that other Los Angeles team, the one that’s been on an unbelievably hot streak and one that is a heavily favored contender.

This was quality basketball — a team that worked together, came out strong, and took care of business despite playing its fourth game in five days. I saw Chris Paul effortlessly executing beautiful plays, a thunderous dunk from an excited DeAndre Jordan, and a young team energized, refreshed, and set on making a name for itself.

That Clippers team awed the NBA fan inside of me, but no part of their brilliant performance inspired me to change allegiances. They say you never forget your first love, so although the Clippers are the better team in the City of Angels right now, the Lakers will always have my heart — and the heart of Angelenos.
— Patricia Lee 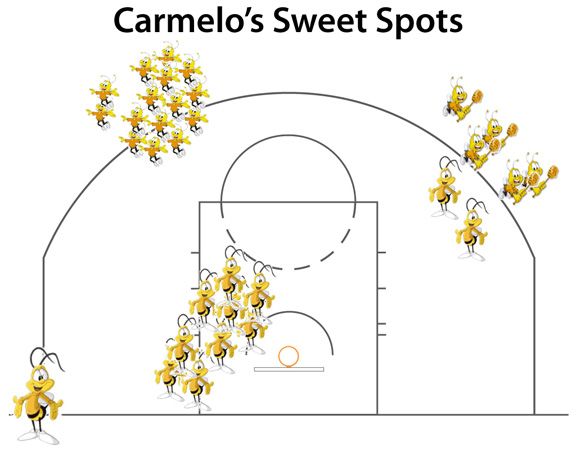 At this point, dunking on Jermaine O’Neal and Michael Beasley is pretty much like dunking on Jeff Bridges and John Savage from Cutter and Bone. But kudos just the same, Jeff Green. Nice to see him destroy dudes every once in a while (even if he is having a pretty horrendous January).
— Chris Ryan

(1) Nice to have Ricky Rubio back making opposing players feel like they are on Shutter Island. (2) That is probably the highlight of Derrick Williams’s professional career. (3) Just the other day, Kevin Durant tweeted, jokingly, that he was worried that Kendrick Perkins was having a bad influence on him. Durantula was referring to the very-off-brand three technical fouls in three games he had racked up, but he certainly does a passable Perk impression as a spectator on this Williams dunk.
— Ryan

What’s in a Name?

When the Nets pulled up stakes in New Jersey and migrated into Brooklyn, the move was accompanied by a makeover that would have made a fugitive proud. Patriotic colors were dimmed to grim black and white. The three-dimensional logo was simplified into stark Microsoft clip art. And Jay-Z’s Marcy credos were almost enough to convince the public that Mirza Teletovic was the missing member of Originoo Gunn Clappaz. But instead of swapping out “Nets” for something marvelous (like “Brooklyn Zoo” or “Brooklyn’s Finest”), the name inexplicably remained the same.

Maybe it was a long hustle. With the news breaking yesterday that the Sacramento franchise is likely relocating to Seattle — where it would presumably be resurrected as the beloved Sonics — the name “Kings” becomes available. Is there any chance that Brooklyn doesn’t snatch it up for next season? Is it a strange coincidence that there’s no actual “net” anywhere in the current logo, and that neither home nor away uniforms even include the word? Do we believe the Nets just randomly have a mascot named the BrooklyKnight who wears a tin can helmet on his head?

First, let’s dispense with the obvious: Brooklyn is in Kings County, which immediately addresses the requisite regional component (sorry, New Orleans, no need to pilfer handles from aquatic birds and chimerical half-man/half-muffaletta beasts up here). The name is regal, serious, and timeless, all attributes the franchise seemingly hoped to cultivate with the grave color scheme and bleak logo. And from a hip-hop standpoint, the appeal of being the “King of New York” wends back to the Biggie Smalls cover on The Source in July 1995, at least. But the most beautiful thing for Brooklyn is that they can pluck up the name, sell another gazillion dollars’ worth of merch (while avoiding the appearance of being craven blood-letters), and sleep easier about paying Deron Williams $20 million a year to put up the same numbers as Raymond Felton. It’s happening.
— Ben Detrick

Not exactly vintage Iguodunka, but we’ll take it.
— Ryan

[Not pictured, LARRY SANDERS! swatting his thirteenth block in two games, protecting the rim like a spider flailing all eight legs at once. Eternal hat tip to the SANDERS! overlord, Zach Lowe]
— Sean Fennessey

Though his team finished last season with 21-45, there are some voices (read: mine) lobbying for Hornets head coach Monty Williams to be a serious contender for the Coach of the Year award. It seems crazy to think that a .318 winning percentage is grounds for such an award, but the success of coaches is largely based off of the way they utilize the talent they have on hand. With Eric Gordon M.I.A. for much of last year, it’s fair to say Williams didn’t have much. Yet somehow a roster held down by a group of NBA afterthoughts and future D-Leaguers managed to stay competitive on a nightly basis.

With Gordon absent again to start this season and no. 1 overall pick Anthony Davis missing a large chunk of time in the early going as well, Williams lacked the horses to pose as a genuine threat to top-tier teams. (The fact that Austin Rivers’s rookie campaign has been a total disaster has only made life more difficult.) But now both Gordon and Davis are back, and with wins over Houston last night and San Antonio on Monday, New Orleans is going to be a handful on most nights from here on out.

Though the criminally underrated Greivis Vasquez and reserve big man Jason Smith carried the load for the team last night, Gordon’s return has been a godsend. Not only does he give the team a dynamic wing scorer, but Gordon’s mere presence — even on a night where he was 2-for-12 from the field — has mercifully allowed Williams to cut Rivers’s minutes from nearly 30 a night pre-Gordon to a slightly more palatable 16.3 upon his return.

Make no mistake about it, with less Rivers and more Gordon, this Hornets squad is going to be a major pain in the ass for the Western Conference teams jockeying for playoff position during the latter half of the season.
— Brett Koremenos