We Can Be Heroes … Just for One Day

(All GIFS by HeyBelinda unless otherwise noted.)

Ben Detrick: After the Sixers’ offseason teardown, basketball pundits figured the team would be tanking in obvious pursuit of lottery Ping-Pong balls. But after last night’s victory over the Heat — an upset that began with an astonishing 19-0 flash flood and ended with a surging rally in front of Dr. J, Moses Malone, and the (now technically) retired Allen Iverson — the Sixers are the TRANSITIVE LOGIC WORLD CHAMPIONS OF ALL BASKETBALL. Philly’s new GM, Sam Hinkie, is playing six-dimensional chess in elliptical space, dog.

The real story from last night was the eruption by Philly’s vermicelli-limbed rookie Michael Carter-Williams. In arguably the finest introduction since Wilt the Stilt, he racked up 22 points, seven rebounds, 12 assists (second-most in a debut!), nine steals (most ever in a debut!), and one measly turnover. The oversize point guard out of Syracuse breezily passed over the top of Miami’s double-teams and answered questions about his jumper by draining four 3s from deep. And Carter-Williams was everywhere defensively, unraveling stickily across the court like a roll of human flypaper.

Was this #very #rare performance a case of a lightning bolt striking a unicorn? Maybe not. In the preseason, Carter-Williams was among the league leaders in steals and sported a stingy 3-to-1 assist-to-turnover ratio. Sure, he’s going to have ugly 2-for-12 shooting nights, but his excellence as a distributor and ball hawk looked repeatable. For Philly fans, though, Carter-Williams’s emergence presents something new to grumble about: Are the Sixers going to mess up even tanking?

Chris Ryan: And that is just not enough to get involved here. Sorry.

The Night of the Living Weird 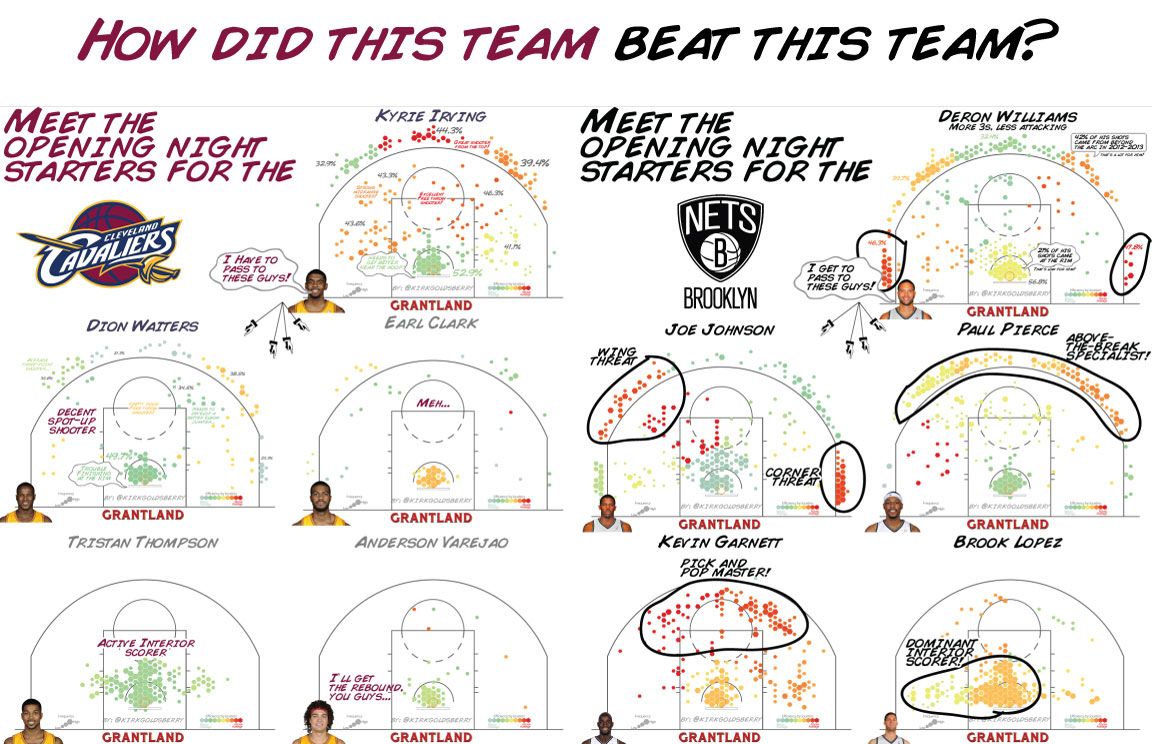 Kirk Goldsberry: The Lakers set a weird tone for the new NBA season by beating the Clippers on opening night, but last night a few things extended the trend. Philly beat Miami, Cleveland beat Brooklyn (see above), Pierre the Pelican beat your eyeballs, and Monta Ellis put on a vintage Allen Iverson Halloween costume. It was his big debut in a Mavs uniform and he was the best player on the floor, making 11 of his 17 field goal attempts and ending the game with 32 points and eight assists.

For me Ellis is the most fascinating player of the young season. He’s been ridiculed for years as a horribly inefficient player who takes some of the worst shots in the league. But maybe some of these critiques have been unfair. Ellis has always been in bad situations. He’s always found himself as the best scoring option on bad teams. As a result, Ellis carried a burden of expected volume that outmatched his ability to be effective. In basketball analytics terms, this pushed him way down on the “usage-efficiency” curve. But in Dallas, for the first time in his career he finds himself in a very healthy and stable ecosystem, complete with smart, veteran leadership and one of the finest coaching staffs in the NBA.

Could Monta Ellis be really good this year? I’m not sure, but Mavs fans couldn’t have asked for a better start.

Does anyone know if tobias Harris is starting for the Orlando magic tonight!? #fantasybballquestion

Steve McPherson: Do the Timberwolves wish they hadn’t needed Kevin Love to hit a game-tying shot to force overtime against the Orlando Magic, a game they led by 17 points during the second quarter and eventually won 120-115? Sure, but we can still savor that shot and all its heroic glory just the same.

This was Love’s third career game-tying or go-ahead basket with 10 seconds or less remaining (10.1 seconds last night, but let’s not quibble), the other two being against the Clippers and Thunder in 2012. The play for Love last night was pretty similar to the one coach Rick Adelman called against the Clippers:

Derrick Williams curled around at the elbow as a misdirection before Love popped out above the 3-point line, while Ricky Rubio and Wayne Ellington set a sort of “elevator door” screen on DeAndre Jordan. Note that the Williams curl is far from just noise — it actively makes Jordan consider sagging into the paint to defend.

Kevin Martin went the opposite direction Williams did, toward the top of the arc, and Arron Afflalo let Love go between Nikola Pekovic and Corey Brewer, pointing after him and perhaps suggesting that someone else pick him up. Sadly, Solomon Jones was not getting through the meat wall that is Pek.

“We did practice this play,” Rubio said afterward. “It didn’t work very well in practice, but it works in the games, so that’s what counts.”

Chris Ryan: Come for the three-guard hydra of Eric Gordon, Tyreke Evans, and Jrue Holiday, stay for the triple towers of Al-Farouq Aminu, Jason Smith, and Anthony Davis. That doesn’t exactly fit on a billboard for the New Orleans Pelicans, but it describes why I was letting out Ric Flair WOOs in my living room during the Pellies-Pacers game.

There was Davis, last season’s Rookie of the Year runner-up, marauding out on the wing. Why didn’t anyone tell me about this? Apparently, AD spent some time at the 3 for USA Basketball this summer, and Monty Williams had teased the idea of Davis as a wing. But seeing it in game action was something else. In the absence of an injured Ryan Anderson, Davis showed some Durantian flashes out on the perimeter. The Pellies lost to a Pacers team that knows how to snap necks at the ends of games, but seeing all the different ways Williams used Davis was definitely worth the price of admission (the price of admission was explaining to my girlfriend that, yes, we can watch Survivor, but I needed to watch a team called the Pelicans first).

netw3rk: When a player changes teams — whether by trade or free agency — it usually means a slate wiped clean. Amid new surroundings and open minds, an arriving player should expect to enjoy a bit more of the fan’s patience than most of the familiar figures jogging the court in team colors. That’s natural. And, certainly, a player who is freshly arrived with a new team would be within his rights to expect forgiveness for a miss or a turnover, especially if his new team should happen to be ahead on the scoreboard and in control of the tempo in front of the home fans during the very first game of the season. I mention this because, with 35 seconds gone in the second quarter — and with less than five minutes of actual game time in home white under his belt — Andrea Bargnani was booed by the Madison Square Garden crowd.

Cutting across the paint from right to left, Bargnani got some space from a Carmelo Anthony screen, caught the ball just inside the free throw line, turned, and had his shot blocked by rangy Bucks forward John Henson. As he turned to run upcourt, he was booed. Score: 24-18, Knicks. The clock showed 11:28, and Bargnani had checked in with four minutes left in the first quarter. It was his second shot of the game. He missed his third shot about two minutes later, a fallaway from the left block that was met by mostly groans, with a peppering of boos. Forty seconds later, Bargs traveled, at which the crowd made a sound like passengers on a rush-hour train make when a person tries to hold the doors open.

Andrea Bargnani’s final line: 17 minutes, six points, 3-of-9 from the field, one assist, two rebounds, two fouls, three turnovers, minus-11, and roughly half an inch of slack cut.

Brett Koremenos: One of my favorite things about the beginning of the season is how well every team moves the ball, showing a willingness to get all the way through their set. Basically, for a few nights, everybody plays like the Spurs do all the time. For normal, non–San Antonio franchises, training camp and the preseason allow coaches like Cleveland’s Mike Brown to drill home the importance of the ball whipping around the perimeter on every possession. Last night, Cleveland’s motley crew looked more like a cohesive unit than could have possibly been expected. At their best, they moved the Brooklyn defense from side to side, forcing them to defend multiple actions in a possession (two pick-and-rolls, a pick-and-roll and an off-ball screen, etc.) and making both their more vulnerable front lines (the underwhelming Reggie Evans–Andray Blatche duo and the Kevin Garnett–led groups) look overmatched.

It becomes much easier to revert back to a less team-centric style of play as practices get less common and players get worn down by the grind of the schedule in February. That’s right about the time that wing-to-wing reversal passes turn into contested 18-footers. Beautiful, impossible-to-defend possessions featuring electric ball movement become sluggish, one-man dribbling exhibitions authored by Kyrie Irving and Dion Waiters. This happened at the end of last night’s game. (Though let’s be honest, when Kyrie does it, it’s still awesome even if it’s technically bad team basketball.) Finally armed with the talent to make the playoffs, the Cavaliers, who are not only young, but filled with some serial ball-stoppers (looking at you, Dion), must challenge themselves to keep the ball moving, even when the dog days of the season make them want to stand still.

New King for the New Kings

Danny Chau: DeMarcus Cousins stands before you to introduce you to “a new era of Kings basketball.” The team is really, truly staying in Sacramento, it has a bitchin’ new owner with dreams of turning the team into a global entity, and there’s a talented young rookie capable of galvanizing his fellow men with a simple little jig.

There’s a lot to be excited about, but you’re skeptical. New era? That seems a bit much, especially when it’s being verbally ushered in by the same old problem child. The team made a few cosmetic adjustments, but is essentially the same floundering squad of the last few years. But not all eras have to start or end in revolution. When a team goes through what the Kings have gone through these last 10 years, simply feeling secure in the team’s presence is a radical shift in thinking. The organization has fortified its walls from the inside. It’s a new era of certainty.

Boogie certainly looked good last night. The past three years have been an uphill battle for the Kings trying to get Cousins to focus his talents in key areas. His 30-point, 14-rebound performance against the Nuggets’ hapless platoon of big men showed maturity in shot selection. Maybe something just clicked, or maybe it’s something he absorbed from the Big Sensei, but Cousins wasn’t settling for errant shots or making things unnecessarily difficult on himself just for the sake of a challenge. He planted his flag down on the left block and drop-stepped the Nuggets’ interior defense to bits. He shot 50 percent for the game — a welcome change for the career 44.8 percent shooter, yet still underwhelming considering just how good he was down in the post.

“DeMarcus Cousins is putting the team on his back right now,” Kings broadcaster Grant Napear said as the Kings began to solidify their lead in the fourth. On cue, Boogie found himself way deep in position and toppled his defender for another easy bucket. “And it’s a huge back! A talented back!”