Our Favorite Moments From the Clippers-Spurs Series 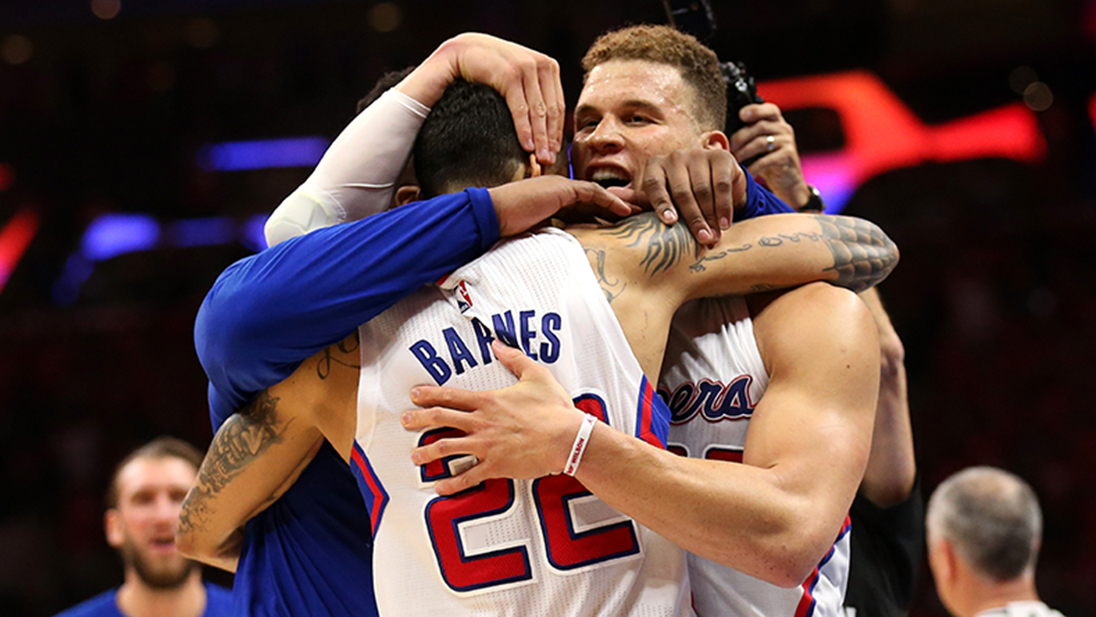 On Saturday night, there was a title fight out west. Also, two guys fought a boxing match in the desert. Despite the flashing lights and celebrity cameos in Vegas, the real main sports event of the weekend was in Los Angeles, where the Clippers and Spurs finished their epic first-round playoff series. Game 7 capped a clash that was at different times revealing, maddening, and wildly entertaining. Here are some of our favorite moments from a series that began two weeks ago but felt like a lifetime ago.

Chris Ryan: This happened in April. It’s hard to remember the beginning of this series. It had so much going for it and took so much out of the players participating and the spectators watching. It had so little to compete with it that it almost became basketball. Every other playoff matchup was a side attraction. This was the only thing we cared about for the last two weeks, and it seemed like the more we invested, the more we got in return.

I like these three dunks because (1) wake up, Aron Baynes, you’re dead, and (2) it’s an almost innocent image of Blake Griffin before he gave away Game 2 — back when he could just uncork on random San Antonio big men. Griffin averaged 24.1 points, 13.1 boards, and 7.4 assists per game in the Spurs series. He averaged 41.1 minutes a night. Yet the questions we ask about his game — whether he can play at his best (hell, whether he has anything left in the tank) when it counts the most — are louder than ever. Over the last two weeks, the whole Blake Griffin thing got really complicated. Can it be that it was all so simple?

This Picture of Steve Ballmer and Doc Rivers 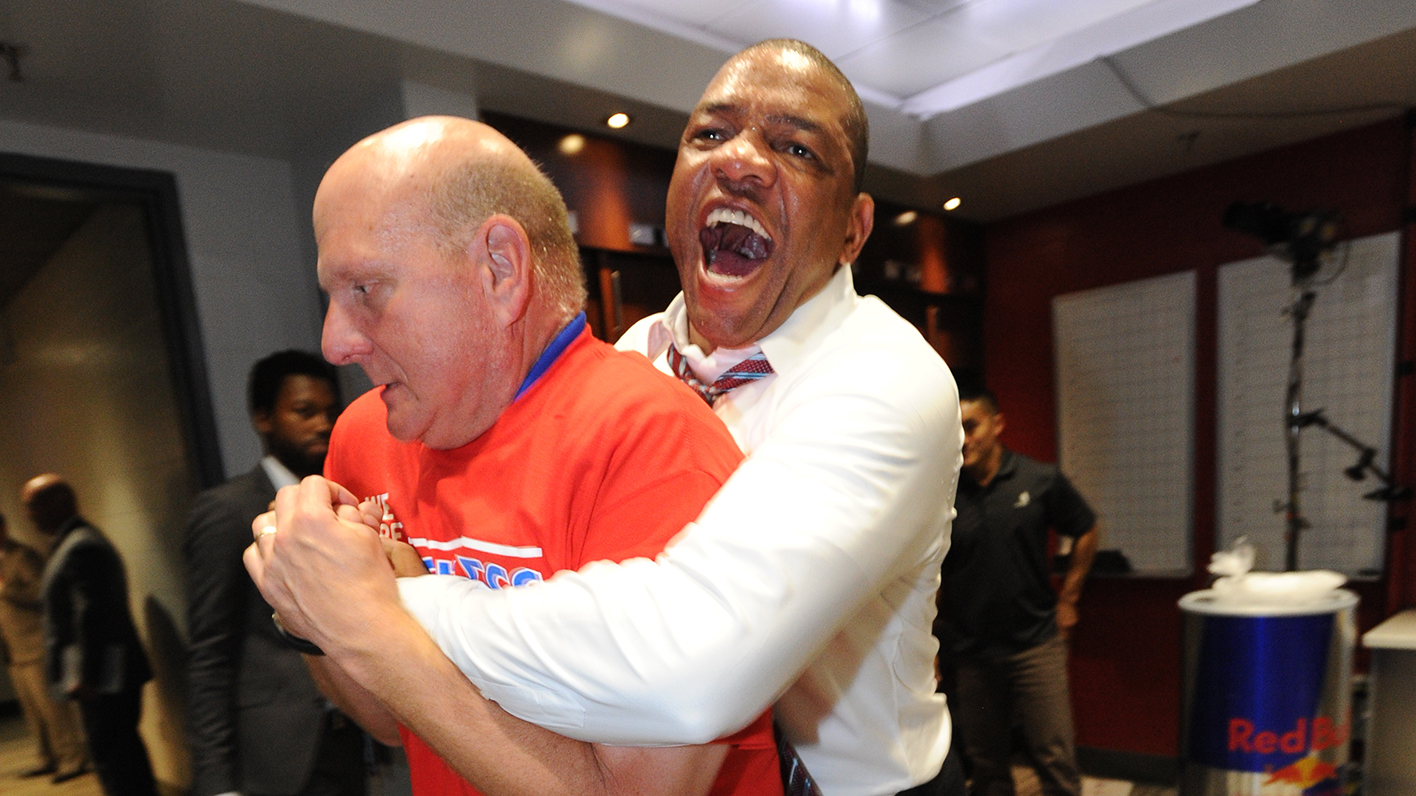 The series had to end this way.

At what point did you realize you weren’t watching a basketball game but an arrogant display by the gods of chance — a real-life Plinko game played out by human men on a court? Despite both teams’ best efforts, they had no control over their own destinies.

The wind was the ultimate decider.

Danny Chau: Here is Danny Green with what I’d consider the best block of the series. He doesn’t jump until Blake Griffin had already reached the apex of his elevation. Hell, you don’t even see Green — who is shaded by Tim Duncan and Griffin, two towering stars of past, present, and future — until the deed has been done. What a quintessential Spurs play. It felt like a block that locked up Green’s fate. He’s going to be a Spur for life. 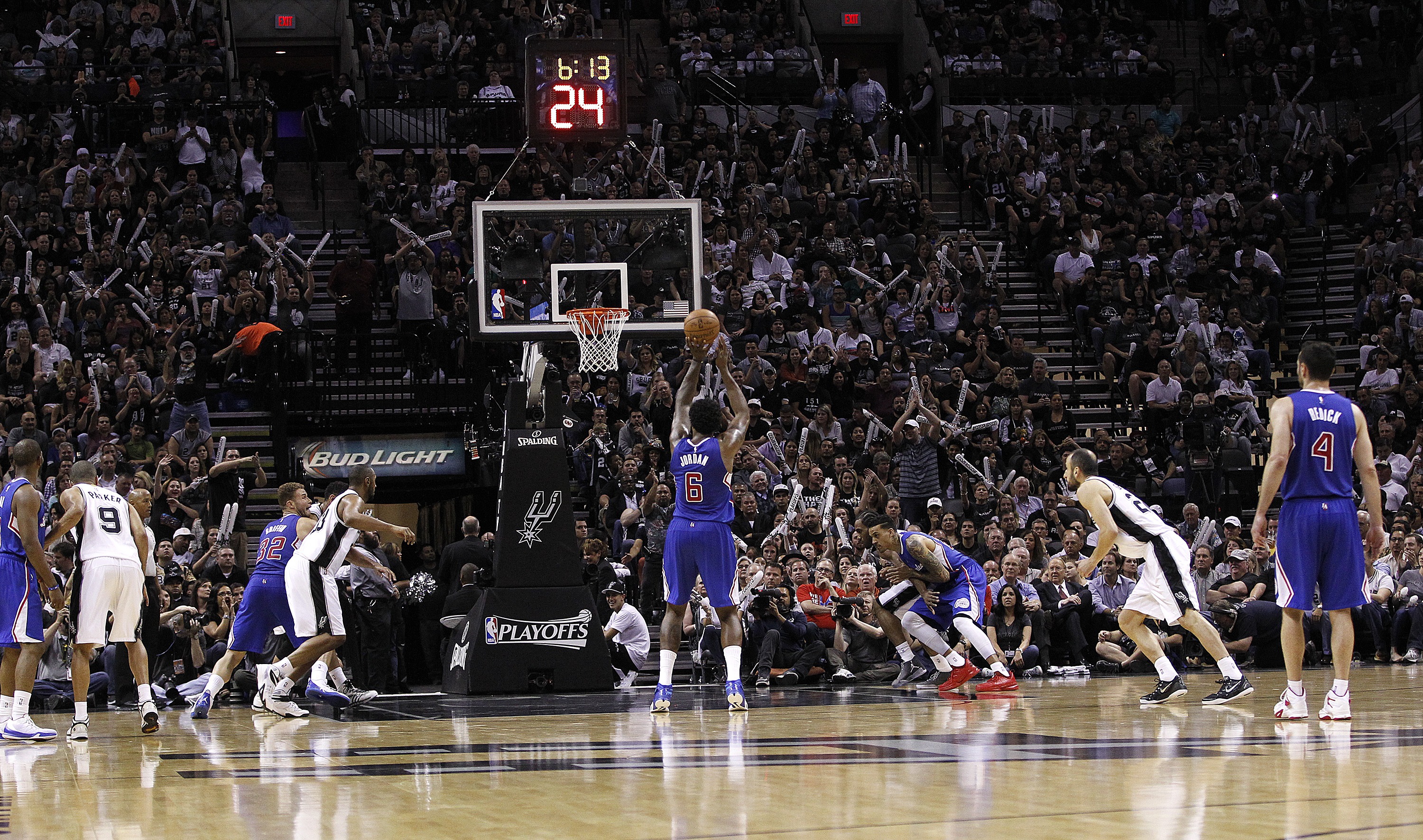 Andrew Sharp: The rest of you can enjoy your owner meltdowns and GIF celebrations and dunk homicides. I’m here to talk about free throws.

It was the subplot looming over every game. It was the trump card Pop could play to destroy a beautiful series, reminding the world that he doesn’t care about pleasing any of us, which in a weird way only makes us love Pop more. “Hack-a-Jordan” was such an obvious blight on an otherwise flawless matchup of players and styles that this series should be enough evidence to get the “Hack-a” strategy banned forever.

Let’s remember one thing about this strategy. The drama offers its own fascinating game within each game. When I lived in L.A. last year and went to Clippers games on a regular basis, the loudest I ever heard Staples Center was during DeAndre free throws. Everyone is part of it. When he rattles one in, it’s straight-up euphoria. When he misses, it’s embarrassing and uncomfortable for everyone involved. There’s no in-between with this. Euphoria or agony.

That’s what we got in just about every Spurs-Clippers game. The whole thing was emotionally exhausting. I hope they ban this stuff just so I don’t have to get into a fetal position half a dozen times during every DeAndre game for the next five years.

Game 6 was our reward. Hack-a-DeAndre started in the second quarter. Chris Paul was a mess, Blake Griffin couldn’t get going, and the Spurs were up nine. It looked like they were about to break into blowout territory and like the Clippers were ready to roll over. Then Pop called for Hack-a-DeAndre, and instead of a blowout, everything slowed down. DeAndre hit three of his six free throws, and the Clips stopped the bleeding. A few minutes and free throws later, the lead was still just nine and the Clippers had gotten some rest without losing any ground. Plus, Tim Duncan had three fouls. By halftime, it was tied again.

I’m not saying that quarter definitely swung the series, but the Clippers were about to collapse, and then they were given a break. And hey, if the Spurs were trying to exploit the letter of the rule while trampling on its spirit, then it backfired when it was time to actually win. Ball Don’t Lie. 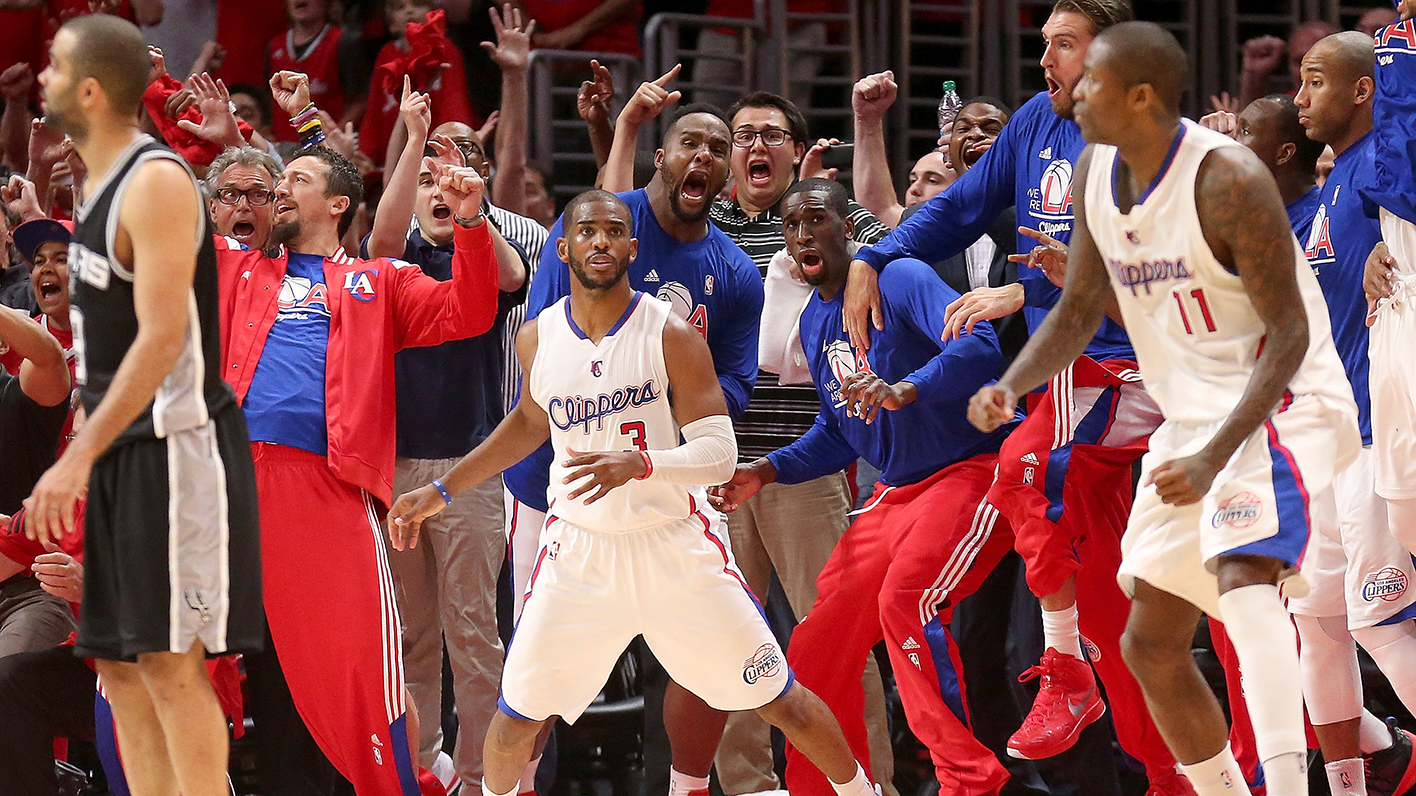 Let’s get on with it!

Jason Concepcion: Sports are a stage, and the playoffs are Broadway and the West End combined. Games are lit from above, divided into acts, performed for a live audience, with heroes and villains, with winners and losers. With that in mind, it’s kind of strange that we, the audience, seem to universally recoil from anything on the court that seems like acting. Flopping. Fake injuries. Tough-guy posturing. We want sports to show us something real. That’s why an athlete gutting it out on one leg will never not seem heroic, and that’s why Chris Paul crying on the bench, when faced with the end of his season, is what we want from sports.

Concepcion: “It’s so hard for me to sit back here, in this studio, looking at a guy out here hollering my name, when last year I spent more money on spilt liquor, in bars from one side of this world to the other, than you made. You’re talking to the Rolex-wearing, diamond-ring-wearing, kiss-stealing (woo!), wheeling, dealing, limousine-riding, jet-flying son of a gun, and I’m having a hard time holding these alligators down. Woo! There’s only one!” —Randy Wittman on his haters

For the entire regular season, the Wittman-helmed Wizards offense was a fossilized hodgepodge of eyeball-melting, spacing-eschewing long 2s. The Wiz averaged 17.2 field goal attempts per game from the inefficient wasteland between 15 and 19 feet, second-most in the NBA, per NBA.com. The top five teams outside of Washington on that list — the Hornets, Lakers, Knicks, Pacers, and Timberwolves — are a who’s who of tanking and catastrophe. The Wiz took 16.8 3-point attempts per game in the regular season, fourth-fewest in the league.

It was easy, then, to lay the blame on the inimitable old Dr. Basketball Face himself, Randy Wittman, he of the .394 career regular-season winning percentage. Wittman and the Wiz were labeled analytics “skeptics” by something called ESPN The Magazine. Seemingly everyone with access to a computer who uses that computer to type words about basketball called for Wittman’s firing.1 Only a week ago, a Vine of a doddering Wittman haplessly trying to figure out which end of his whiteboard was up seemed destined for his virtual headstone.

I typed that while looking into a mirror.

Then, something amazing happened. The playoffs happened. And in these playoffs, Wittman is stunting on haters left, right, center, and virtual. The Wiz are taking 24.4 3-pointers per game, almost eight more than their regular-season average. Paul Pierce, like the meteor that wiped out the dinosaurs, returned to push Drake’s Raptors into extinction, appearing without warning at the 4. Otto Porter’s minutes went from sub-20 per game in the regular season to 32.4 per game in these acid-trip playoffs.

After waylaying the 60-win Atlanta Hawks in Game 1, the Wiz became the first NBA team to win four straight playoff road openers, and they’re 5-0 in the postseason with a playoff-best 16.1 NetRtg.

It’s like the world spent the regular season bugging Wittman to ditch his flip phone and now all of a sudden he’s writing iOS apps.

“Hey, listen, you guys are going to knock no matter what I do,” Wittman said. “I’m surprised I haven’t read that we’re shooting too many 3s.” 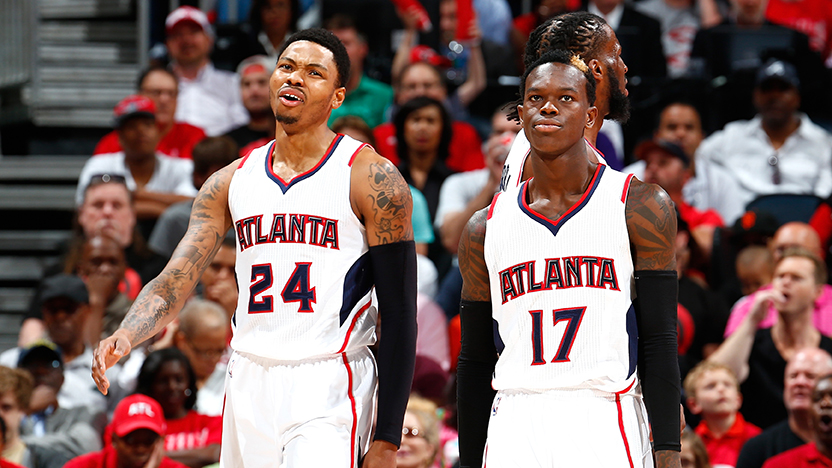 Chau: The Hawks’ two halves of basketball yesterday was like watching a Georges Seurat pointillist piece melt into a Jackson Pollock in real time. Atlanta shot 63.6 percent from the field in the first quarter; it made 17.9 percent of its shots in the fourth. The Hawks’ magical January, and especially the 120-89 evisceration of the Wizards on January 11, feels like a distant memory. Has Atlanta’s beauty faded?

There is no stat in the game that objectively measures beauty, but with the Hawks, there’s one that comes close. When Atlanta’s offensive engine is running smoothly, the individual motion of the players and the ball blend optically; it’s all a bunch of little dots that combine to form a more realized image. Looking at SportVU’s player-tracking data for individual games and taking notice of the ratio of contested shots to uncontested shots can paint a general picture of how well the Hawks are moving and finding the right shots for the right players. During the Hawks’ incredible 19-game winning streak that spanned more than a month, the Hawks attempted more uncontested shots than contested shots2 in more than half (11) of those games. In the playoffs, they’ve only been able to accomplish that in two of their seven games.

Contested field goal attempts are defined by SportVU as shots with a defender 3.5 feet within the shooter’s vicinity.

Yesterday, the Hawks were just unlucky, shooting an abhorrent 30.6 percent when left uncontested. Their average uncontested field goal percentage over the final three games of the first round was 53.4 percent. If there’s a positive takeaway from Game 1, it’s the comfort in knowing the Hawks won’t be that bad again.

A Message to Mike Conley Jr.

Hey there, Grizzly Bear.
Feeling a little worse for the wear?

Well, here is a message from me to you:
I know you’re as tough as the sky is blue.
If you’re feeling like crap and you’re starting to get down,
Don’t despair, and don’t let yourself frown.

You think you’re hurt, and it’s probably true.
Maybe it’s the golf ball under your foot,
Maybe it’s the eye that looks like it got attacked by a baseball bat,
But we both know that you’re coming back soon.
The sad song is over, and we need a new tune.
Facial fractures just lead to greener pastures.

No guard could score, nobody could stop them.
Somebody needs to lead that pick-and-roll
Before Z-Bo can rock them.
Calathes?
My man is helpless inside that Oracle spaceship.

I don’t mean to be rude, but it’s sad and it’s true,
Without perimeter scoring, your buddies are screwed.
We need a good series, the Dubs need a challenge,
And your friends need a point guard to throw this machine off-balance.
That’s why you’re here, and you have to come back,
Because without you around, this whole series is wack.

So get your rest, maybe hibernate till Game 2,
Soon you’ll feel better, and these games will be too.
Pick your Grizzly chin up, and puff your Grizzly chest out,
And get ready for a few more crazy nights in your Grizzly Grindhouse.