That Got Weird: A Series of Vignettes From Nets-Raptors, Game 5

netw3rk: The Raptors beat the Nets, 115-113, at the Air Canada Centre to take a 3-2 series lead in a wildly disjointed affair that was more a collection of weird vignettes than a coherent game.

Vignette no. 1: Kyle Lowry busting the Nets for 21 first-half points, hitting four of five 3-pointers, and the Raps lint-rolling to an 18-point lead. Sarcastic “Broooooo-klynnnnn” chants rain down from the rafters.

Vignette no. 2: Joe Johnson hit the third quarter like the Mongols on the Hungarian Plain. Eighteen points, 8-of-11 from the floor. He did it on post-ups, midrange drives, and a couple of keep-them-honest 3s. The Nets shot 64 percent and still trailed by 22 heading into the fourth quarter because of a balanced Raptors’ attack.

Vignette no. 3: Shit gets weird. The Nets catch fire and the Raptors go four minutes without hitting a shot.

Vignette no. 4: With 3:30 left in the fourth quarter, Lowry, falling out of bounds, attempts to throw the ball off Andray Blatche, striking Dray squarely in the testicles. Blatche crumples to the ground, but the ball stays in play, leading to a Nets fast break and a Johnson 3-pointer. Game tied at 101.

Vignette no. 5: 109-108, Raptors, 30 seconds left in the game. Lowry declines the screen, hits Deron Williams with a cross, and knifes into the lane for a floater. 111-108, Toronto. Cameras catch a dude in the crowd — eyes closed, neck craned, lips in full purse — getting stiff-armed trying to kiss a young lady (see below).

Vignette no. 6: Amir Johnson fouls Alan Anderson on a made 3 with nine seconds left. They both fall to the court in front of 50 Cent. 113-111, Raptors.

Vignette no. 7: Nets down by two, 115-113, with three seconds left. Blatche corrals a rebound and throws the ball into the backcourt as if he were trying to start a fast break going the wrong way. Game over.

Andrew Sharp: Everyone was ready. The Rockets had led by close to double digits for the entire game, but then the fourth quarter started, and a TNT graphic reminded us what was going to happen next. 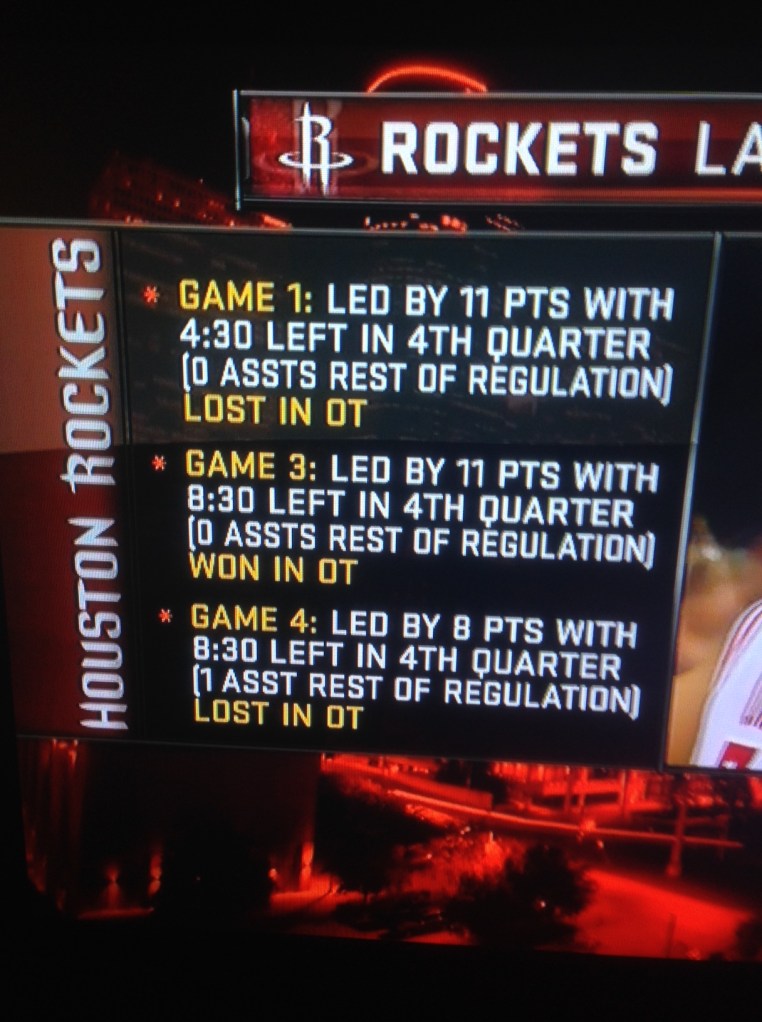 In Game 5, Houston was up nine with nine minutes left, and if Houston was going to lose this series, it felt right for it to collapse one more time. When Portland made it a one-point game in less than two minutes, the ending felt inevitable.

But then Dwight Howard took over LaMarcus Aldridge duty.

And that inevitable Blazers win fell apart. The whole Rockets team got better in the fourth quarter, not worse. Jeremy Lin was huge with 21 points off the bench for the first three quarters, and then Howard and Harden took over when things got close. This was always the plan in Houston, but Wednesday night it … it actually worked? Being a Rockets fan hasn’t looked that fun lately — especially with Shea Serrano playing historian yesterday — but Game 5 flipped the script.

I mean, look at the highlight down there.

Really look at it.

Blink to make sure it’s real.

Yo, Quinn From Homeland Can Ball!

Danny Chau: Do you remember the day you finally took down that Vince Carter poster from your wall? Do you remember how you felt? I was repainting my room in August 2005. I painted my room orange. As I went to tape the poster back up, my mom told me how terribly it was clashing with the wall color. She told me I could get another poster if I wanted. I didn’t protest. And so a poster I’d cherished for six years of my childhood was thrown into the trash. I didn’t mourn. I didn’t really care. Vinsanity was over.

It’s almost been 10 years since then. Carter is still a player, and when you adjust for minutes, pace, childhood heartbreak, teenage cynicism, and young-adult ambivalence, the metrics show he’s still pretty damn good at this game. The best part of the Vince Carter revival in Dallas is how innocuous it is. We’re immune to his charm; we’re post-expectation. He dunked? Cute. He’s revving an imaginary motorcycle? Way cute. He made a game-winning fadeaway from the left baseline in Game 3 that mirrored his attempt in 2001 against the Sixers, a missed opportunity that remains one of the biggest what-ifs of his career? Cu— wait, I still can’t believe that actually happened.  He … he went for 28 points in almost 28 minutes on 10-for-16 shooting last night, including seven 3-pointers on nine attempts? Hold on, it’s getting hard to breathe.

Carter did his best to keep the Mavs in the game, but there’s only so much you can do when the rest of the team shoots worse than 40 percent. (Quick reminder: Carter is 37 years old.) Most of us have reconciled the idea of Vinsanity with the player he became. In the last three games, in small moments and big, he’s won us all over, again. Vinsanity was a point in time, but Vinsanity is also a feeling. We welcomed it back for a night.