Chris Paul Is Why Westbrook Can’t Be Westbrook

netw3rk: Having Chris Paul run your offense is like being able to lock offensive possessions in a safe-deposit box. Paul has long been the best point guard in the NBA; the only argument for taking any of his rivals over him was either rank contrarianism or blatant homerism.

Of the four best seasons in PER by a point guard, Paul holds three, with this season’s 25.9 mark tied with 2005-06 Allen Iverson for eighth-best for a point guard. His 46.5 career assist percentage is second only to John Stockton. He has led the NBA in steals in five of the nine years he’s been in the league. His dribbling technique, shooting ability, and athleticism are, of course, excellent, but what really separates him from the pack is his uncanny ability to not make bad decisions, to squeeze the maximum potential out of every possession.

Chris Paul is also, I suspect, the thematic shadow looming over criticisms of Russell Westbrook. “Let Westbrook Be Westbrook” is the battle cry of Westbrook’s defenders, as if a player who put up 21.8 points, 6.9 assists, 5.7 rebounds, and a PER of 24.7 — a player whose every move on the court is a crackling explosion of athleticism and finger-gun holstering — needs defending. Westbrook is a marvel of a basketball player who occasionally makes the wrong decision. And, since the Thunder are a perennial contender, those wrong decisions — an ill-advised pull-up, an overdribbled iso — stand out under the glaring spotlight of the postseason. If there’s a reason people can’t fully accept Westbrook for who he is as a player, it’s that he plays point guard. And so does Chris Paul.

The Bradley Beal Bandwagon Is Filling Up

Andrew Sharp: This isn’t normal. You guys all see it, right? Per Michael Lee at the Washington Post, “Bradley Beal is the first player in NBA history to have 3 playoff games with at least 25 pts before his 21st birthday.”

Or maybe it is normal. Maybe this is what it looks like when good players hit that next level. It happens slowly over a few years, and then BOOM, it happens all at once.

I’m just saying. Something clicked with Beal. The way he moves without the ball. The way he reads defenses and either pulls up off the screen or takes two dribbles into a midrange jumper. The way he attacks — he actually attacks the rim now! And even though he looks way too small to live through the contact, he somehow manages to finish once he gets there. When he does all this, he’s unguardable.

I was worried that seven games of Beal with Lance Stephenson would be like locking a puppy in a basement with a pit bull. But BAO BAO is looking more and more like a killer panda, and he won the battle Monday.

Mixed animal metaphors aside, Game 1 was a perfect snapshot of the Wizards’ playoffs so far. Nene played well, Marcin Gortat played so hard you forgot about all the missed layups, Trevor Ariza was bombing 3s, and they got a heroic performance from some random dude off the bench (Drew Gooden). John Wall was the most dominant athlete on the court, terrorizing people at both ends. But the most impressive of anyone was Beal. Everyone said he could be great one day, but then he turned around and said “Fuck one day.” We’re watching Bradley Beal turn into a star right now.

Chris Ryan: At this point I would put someone’s chances at scoring a fast-break layup while John Wall is on the floor at approximately the same odds as successfully kidnapping Liam Neeson’s daughter.

Above, Wall puts a Lance Stephenson layup in the trash compactor. Below, he spikes a Paul George attempt and leaves the one-time dark horse MVP candidate in a heap on the floor. Then he ice grills the Indiana crowd.

If you’re keeping score at home, it took less than one quarter for the Zards to lose any and all respect for the Pacers. 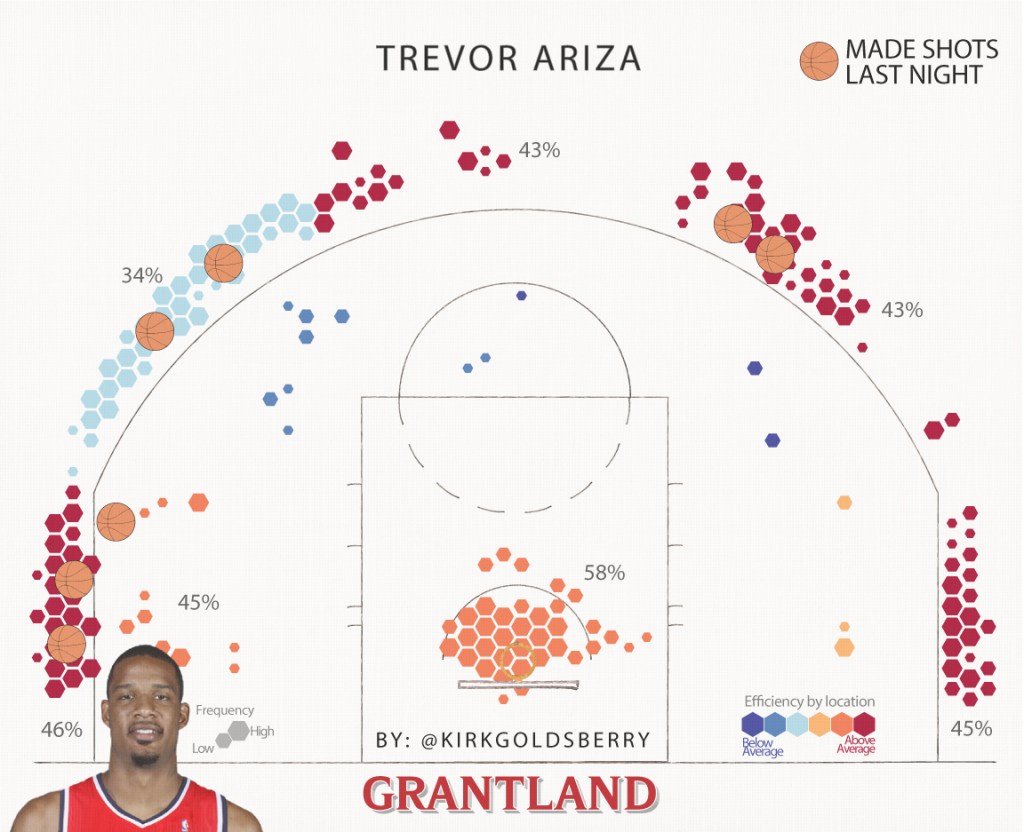 Kirk Goldsberry: Washington’s first two field goals last night were 3-point shots by Trevor Ariza, who led the league in made corner 3s this season. Those early buckets set the tone for an evening of perimeter wizardry from D.C. Ariza was a perfect 6-for-6 from beyond the arc, taking advantage of multiple Paul George defensive lapses. There was a time a few months ago when the Pacers were known for never giving up the kinds of open 3s that Ariza and Bradley Beal routinely got last night … but those days are gone.