Allow Me to Retort

Danny Chau: LeBron James downplayed how much the public wrath bothered him after Game 1, but he had three days to craft a response. Maybe he was able to tune it out, like he’s claimed to be able to do ever since 2012, when he won his first championship. But the Crampgate ridicule he’s faced might’ve been the most vociferous since the “Is He Clutch?” era of his career. LeBron wanted to set it all straight, in a language understood universally. So for two quarters, he was in rare form, transmitting in the kind of binary code perfected by the likes of Michael Jordan and Kobe Bryant. He got whatever he wanted, and he waved off teammates for the purpose of taking each and every challenge himself. It’s a broad language, but it gets the point across quite well.

All seven of LeBron’s field goal attempts in the second quarter came from within 2 feet of the basket; all seven of his attempts in the third quarter were bombs from at least 17 feet out. His output was so consistent, so precisely scattered, it was as though he’d automated a preset. Yet it was still at least a little jarring watching LeBron force the issue for himself in the second and third quarters, right? At times it felt like he willfully disregarded the multiverse of his basketball mind to achieve the platonic ideal of conventional greatness that he was always meant to transcend. His scoring ability is ever-looming, but it’s the unselfishness that will always define him as a player. “Makes the right play” is going on LeBron’s headstone, and it’s the most concise way to describe his game. But it’s a lot easier to celebrate process over results in the context of a team. When you embody that concept as an individual, it can end up looking like a weakness.

Of course, my reservations about LeBron’s third-quarter explosions melted away, because that’s what individual greatness does. It didn’t hurt that LeBron’s most memorable play of the game might’ve been his kickout to Chris Bosh for the game-sealing corner 3. LeBron danced with public opinion for most of the game, but closed it out with the right play. That’s how we’re going to remember all of this. 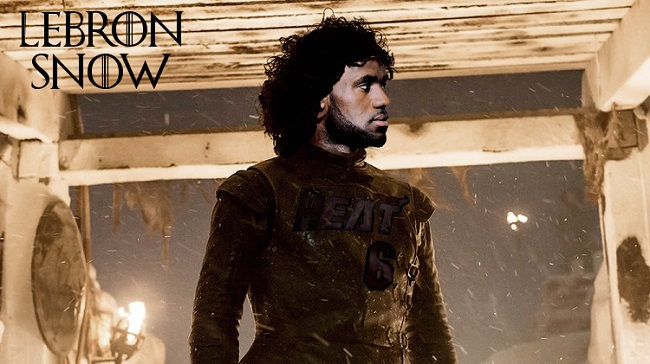 Kirk Goldsberry: LeBron James went to yoga yesterday morning at the team hotel in San Antonio. Later that night, his perimeter chakras namasted all over the Spurs.

“For me, once I get into a good groove, I feel like everything is going to go in,” James said after Game 2.

The problem with opponents turning LeBron into a jump-shooter is that sometimes he can find one of those grooves. The second half of Game 2 was one of those times. James made eight of 11 attempts outside the paint, including a huge 3 that was arguably the game’s biggest inflection point. After the Spurs missed four consecutive free throws and a chance to build a six-point lead, James mercilessly drained a left-wing 3 to give his team a late one-point lead. According to Chris Bosh, James’s hot streak also made the Spurs adjust their game plan.

“That made them get out of their game plan a little bit because he got his jump shot going.”

netw3rk: The Miami Heat versus the San Antonio Spurs is basically Al Pacino’s Any Given Sunday speech given form; it is basketball at the very highest level. Dating from the 2011-12 season, up to and including last night’s Game 2, the Heat and the Spurs have played 14 games. In those 14 games, the Heat have scored a total of 1,385 points and the Spurs have scored 1,386 points. That — in the most simplistic, reductive of terms — is the minuscule margin between these two teams over the past three full seasons. One point. Between the borders of that single point, any one of the nearly infinite number of pixel variables that make up the picture of an NBA game takes on a weight so precise that the bounce of the ball can be the breeze that tips the scales.

The difference could come down to Kawhi Leonard getting into foul trouble and having to switch off defending James, making it slightly easier for LeBron to incinerate every “… GET OUT OF THE KITCHEN”–style fan sign in a 14-point third-quarter conflagration that probably had dozens of fans heading for the AC room with ill intent.

It could come down to Mario Chalmers elbowing Tony Parker in the ribs, causing Parker to miss the next few possessions as well as the ensuing free throws, directly resulting in a three-point Heat lead. If the Spurs would’ve shot 79 percent from the free throw line in the second half — their season average — they would have won the game.

Or it could come down to Chalmers and Norris Cole being so bad that Erik Spoelstra trotted out a point guard–less lineup — Wade-Allen-Lewis-LeBron-Bosh — that had played only nine minutes together all year (all in the playoffs), but that helped keep the Heat in the game.

The Heat got lucky last year, and, as much as they may bristle at hearing it, that was the difference. The past three years being prologue, whoever wins this year will have luck to thank as well.

Andrew Sharp:  So this goes back to something Danny Chau wrote about Miami before this series got started.

We’ve all grown accustomed to seeing their familiar faces on screen. The Heat, in a sense, are a TV family, one that’s already lasted longer than most TV families these days.

If the Heat are our TV family for three months every spring, then Chris Bosh is the character I’ve learned to love the most. Because he looks so much like a dinosaur that’s it not even really a joke anymore; it’s just a fun Chris Bosh fact. And because there’s no athlete in sports who’s more thoughtful, honest, and human on a regular basis.

He takes all kinds of shit from people — some of it’s fair, most of it’s not — but it doesn’t really change him one way or another. The Internet has questioned his manhood forever, but the manliest thing Bosh does is refuse to posture and try to be someone he’s not. Whether it was crying when the Heat lost in 2011, or his unforgettable war with confetti when they won last year, he just can’t stop being his goofy-ass self.

People say he’s underrated, but I don’t know if that’s actually true. Everyone knows how good Bosh can be; that version just doesn’t always show up. Sometimes he gets pushed around. Sometimes he disappears.

And then sometimes he grabs the rebound that turns into Ray Allen’s 3 to save Game 6 last year. Or when LeBron starts slow in Sunday’s Game 2, Bosh keeps the Heat alive early on. Then LeBron goes into full-on god mode down the stretch, and Bosh nails a 3 to help seal it at the end, then finds a wide-open Dwyane Wade to ice it for real.

These are little moments that will be mostly forgotten beyond a paragraph in longer stories about LeBron. And that’s fine, actually. It just makes me love Bosh more. He’ll never be the star here.

But this Miami roster surrounding LeBron is shakier than it’s ever been, and that means Bosh’s little things are more important than ever. Last night was our reminder of all that, and Bosh came through with two huge plays, and then his raging dinosaur celebration to punctuate everything, and we got a second reminder: It never gets old watching Chris Bosh be the hero.

Shea Serrano: Gregg Popovich is a human with a cell phone so I sent him some text messages during Game 2 of the NBA Finals.

Me: hello
Pop: that’s better
Me: ha. Right. but do you remember that line? It’s from a rap song from a few years ago called “pop, lock & drop it.” It was real popular. It was by a guy named Huey from St. Louis.
Pop: I don’t listen to a lot of St. Louis rappers
Me: me neither
Pop: is there something I can help you with?
Me: how are you feeling about the game tonight? The heat haven’t lost two games in a row in the playoffs in, like, more than two years.
Pop: oh really? I didn’t know that. Where’d you get that stat that I didn’t know? that’s so crazy. You’re like the king of stats.
Me: OK
Pop: was your dad a statistician?
Me: pop
Pop: do you come from a long line of statisticians?
Me: come on
Pop: did your family come over on a boat made of stats?
Me: :/
Pop: do you nourish your babies with stats?
Me: I get it, I get it. Sorry.
Pop: for very special holidays do you give your wife a beautifully wrapped box and then when she opens it up it’s just full of stats?
Me: please stop
Pop: do you tell your children statistics-based fairy tales before bed?
Me: pop I’m sorry please stop
Pop: is there a statistics monster that gets kids that misbehave???
Me: all right OK bye pop

Me: tied at halftime. That’s good, I guess?
Me: what’s the plan for the second half?
Pop: we’re going to try to score more points than them, on account of them having the same amount as us right now
Me: that’s a good plan
Pop: you’re very good at basketball strategy
Me: thanks pop. That means a lot.
Pop: hey, is there a key on this phone’s keyboard that you use for fart sounds?
Me: idk
Me: why?
[No response.]
Me: why?
[No response.]
Me: oh.
Me: Because of me.
Me: you’re very mean
Pop: am I as mean as you are good at basketball strategy, because that’s something right there
Me: :(

Me: that fourth quarter was not very much fun
Pop: true
Me: what do you even do with LeBron? He’s like a rhino standing on its hind legs.
Pop: we’ll do some stuff
Me: I’ve never seen LeBron in person. He looks like he has metal arms like Jax in Mortal Kombat. Does he?
Me: i heard that LeBron arrived to Earth inside a meteor. Do you know if that’s true?
Me: or if he spends the offseason living in a deep ocean trench like Godzilla absorbing energy from the Earth’s core?
Me: or, at least, I think that’s what happened in Godzilla. I don’t know. it was really bad.
Pop: It really was.
Me: THANK YOU.
Pop: I liked the old Godzilla movies
Me: Me too
Me: they were the best
Me: my favorite was the one with the bug monster
Me: that was definitely my favorite
Me: I’m glad we have this in common. This is great.
Pop: Shea
Me: yeah, pop?
Pop: shea, you’ve never seen the old Godzilla movies, have you?
[No response.]
Pop: Shea?
Me: … I have not. Dang.
Pop: good-bye, shea
Me: bye, pop