A look back at who won and who lost during an exciting NBA All-Star Weekend in New York City. 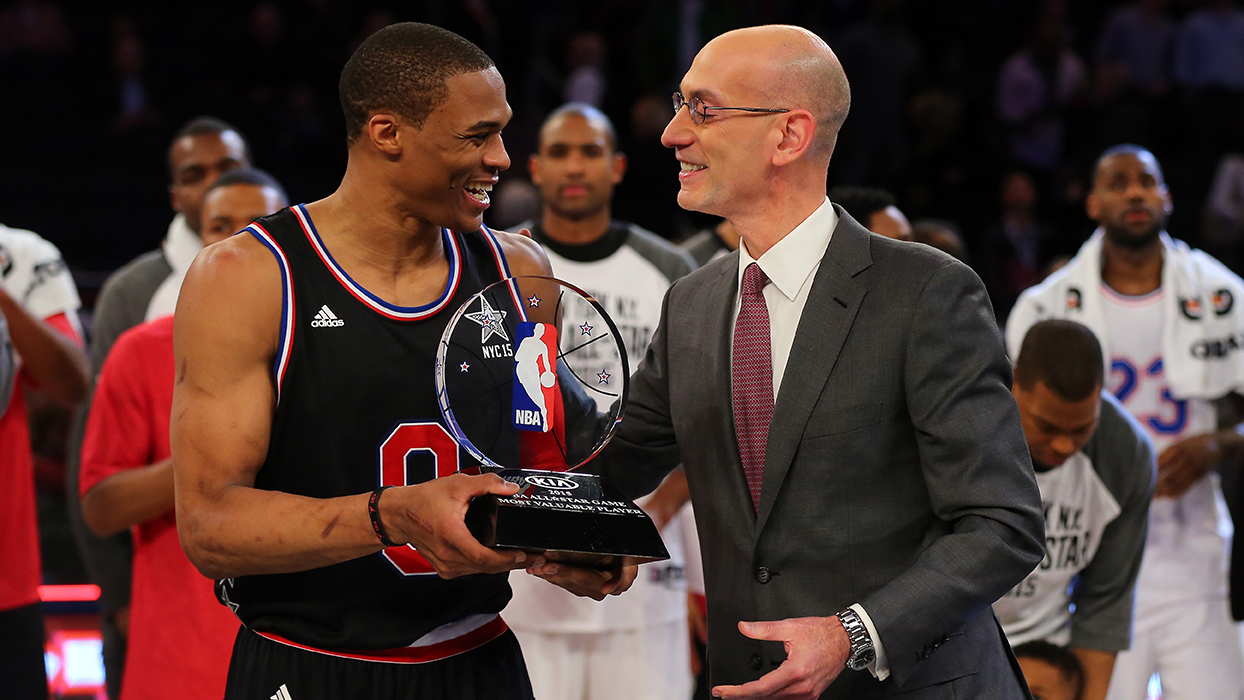 Last night was Russell Westbrook at his best. And at his best, Russ is a surreal mix of hyper-powered self-regard, rim-murdering athleticism, and transgressive play-the-wrong-way recklessness. It’s aggression as poetry. 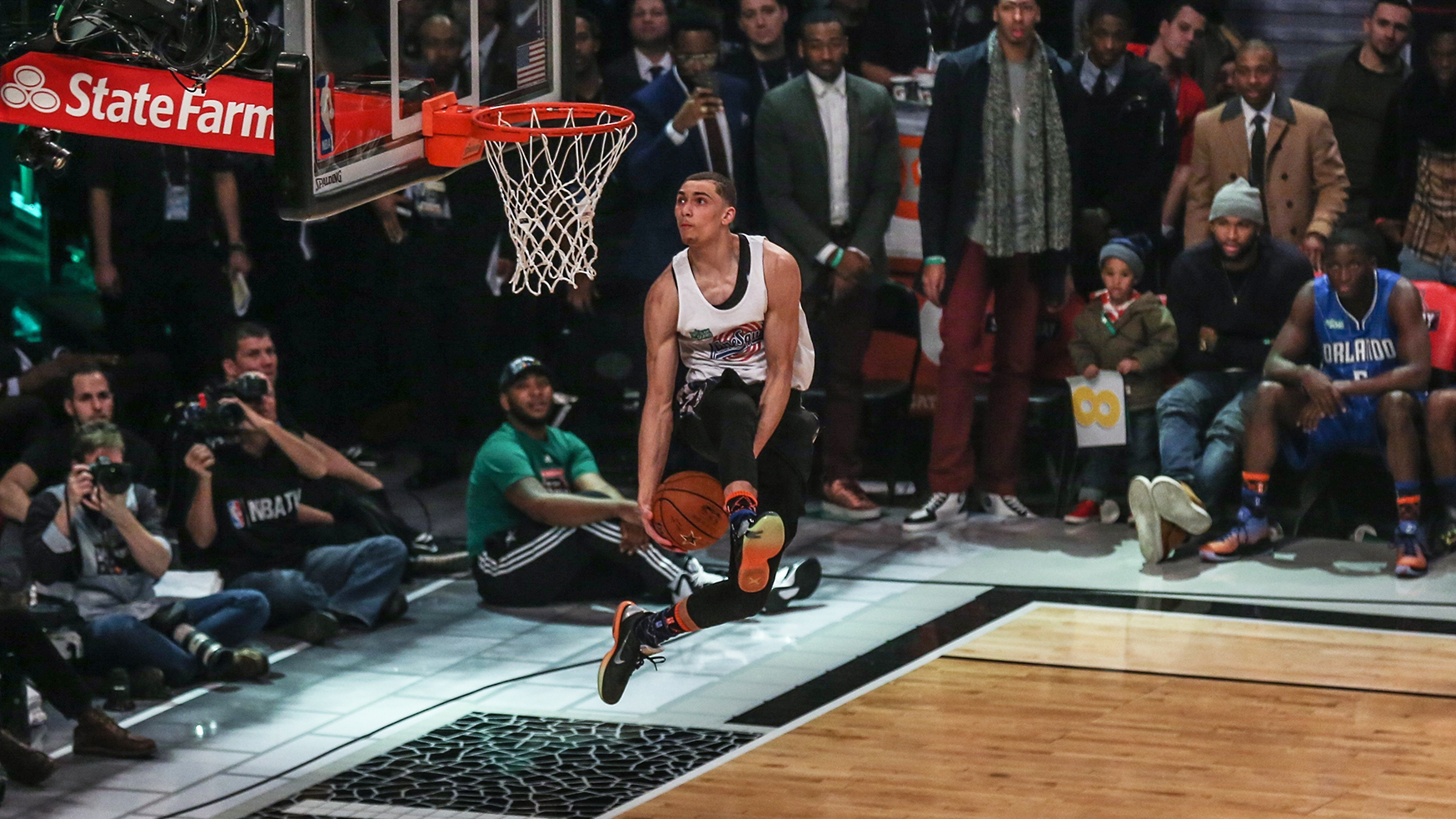 If there’s one thing Zach LaVine has wanted people to know since the Timberwolves drafted him with the 13th pick last summer, it’s this: When he gets up, he gets sky-high.

During summer league in Vegas, when in-game opportunities weren’t providing the requisite runway, he made up for lost air time by dunking during layup lines. He dunked during Timberwolves training camp fast-break drills. When I asked one of the developers of NBA Live 15 at a press event if any players ever complained or lobbied for their stats, he said LaVine told them, “You know I can get up, right?” During the rookie photo shoots in August, he strapped on a GoPro and dunked so we could all ride along. Asked then if we would see him in the dunk contest, LaVine replied, “I got a lotta dunks for y’all.” Indeed he does.

When Ricky Rubio went down early in the season, Timberwolves coach Flip Saunders was forced to give LaVine more minutes than he or anyone else expected. What we’ve seen in that 22 minutes per game is a player who’s more suited to shooting guard than point guard, who’s overmatched on defense, and who, in almost every way, seems like a hyperactive 19-year-old in a candy store. Which he basically is.

In other words, LaVine’s game translates perfectly to All-Star Friday and Saturday.

During the Rising Stars Challenge, LaVine looked to dunk first, second, third, fourth, fifth, and 118th. Every time he got the ball, he’d knife down court with that hazardously high yet shockingly effective dribble — a human heat-seeking missile, aimed right at the rim. If the dunk wasn’t there, he’d pass out to the perimeter, not so much reluctantly as vaguely. At one point, he passed to a referee, probably because the refs’ light-gray shirts were roughly similar to the Rising Stars Team USA uniforms. At another point, he did this.

One of the many difficulties in staging the dunk contest in recent years has been that, in general, the league’s best and most athletic players want to be known for something more than just dunking. LaVine has no such qualms. He has been waiting for this his whole life. When he unleashed that mind-bendingly psychedelic behind-the-back Matrix dunk, Andrew Sharp and I instinctively shot out of our seats and tried to run out of the arena. 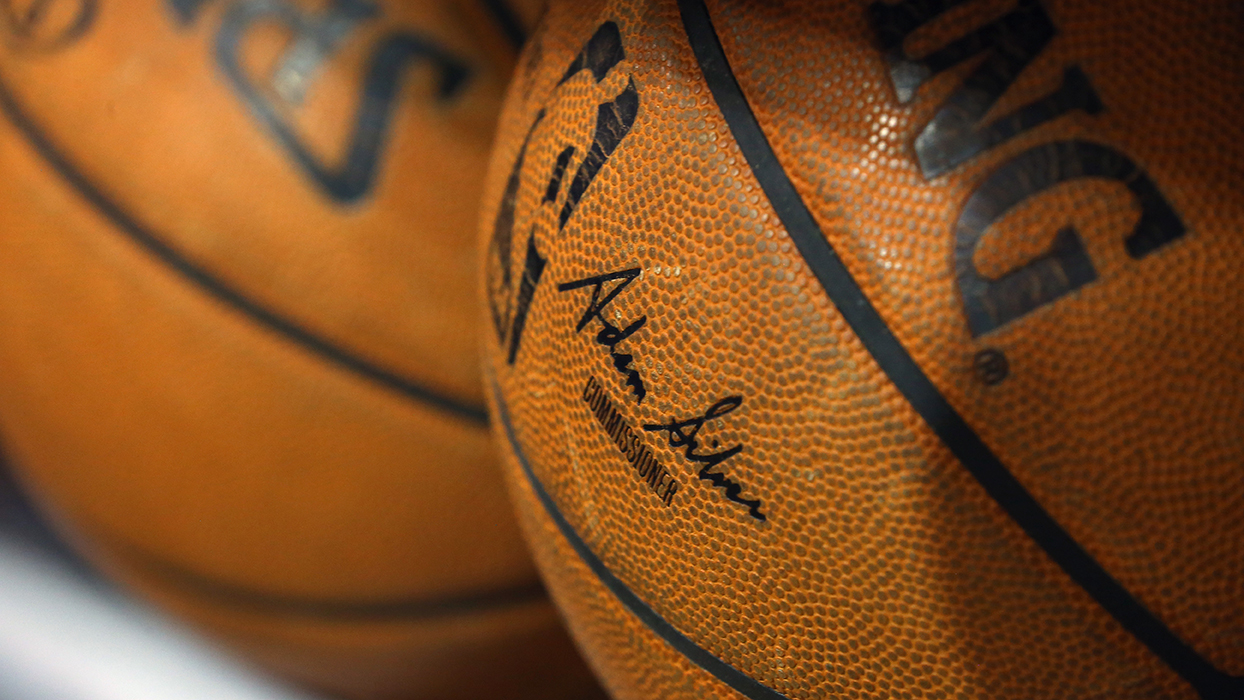 There’s a decent chance that Adam Silver’s Q Score will never again be as high as it is right now. Since taking over for David Stern last year, he has presided over the looooooong-overdue excommunication of antebellum troglodyte Donald Sterling, oversaw the record-shattering $2 billion sale of the Clippers to the enthusiastically wealthy Steve Ballmer, and negotiated a new and incredibly lucrative television deal.

Along the way, he’s shown a willingness to engage on numerous issues, such as the schedule, the draft lottery, playoff structure, shortening games, replay, teams in Europe, and a soccer-inspired midseason tournament. He took part in the Ice Bucket Challenge. Imagine how fast David Stern would murder the person who suggested he dump ice water on his body.

Silver’s state-of-the-league press conference on All-Star Weekend was part victory lap and part restatement of his willingness to tweak various aspects of the game. All in all, Silver has projected an image of a benevolent overlord, a willing (occasionally to the point of seeming reactionary) reformer, and a dedicated league policy wonk with a disarmingly awkward public speaking style. Quite a shift from Stern’s iron-fisted, rapier-tongued style.

It’s too early to say there are storm clouds on the horizon, but there’s at least a sense that the winds are shifting and the honeymoon phase is drawing to a close. In October, the league’s draft “anti-tanking” reform initiative fell short of the 23 yes votes required to pass it. Silver is on record as wanting the league’s minimum age requirement bumped up to 20; players’ union executive director Michele Roberts blocked that proposal into the stands, saying, “Be happy with one-and-done, it’s not going to be two-and-done.” And on Friday, the union unanimously rejected the league’s proposal to stagger the amounts of incoming cash from the newly signed television deal, setting the stage for potential labor strife. 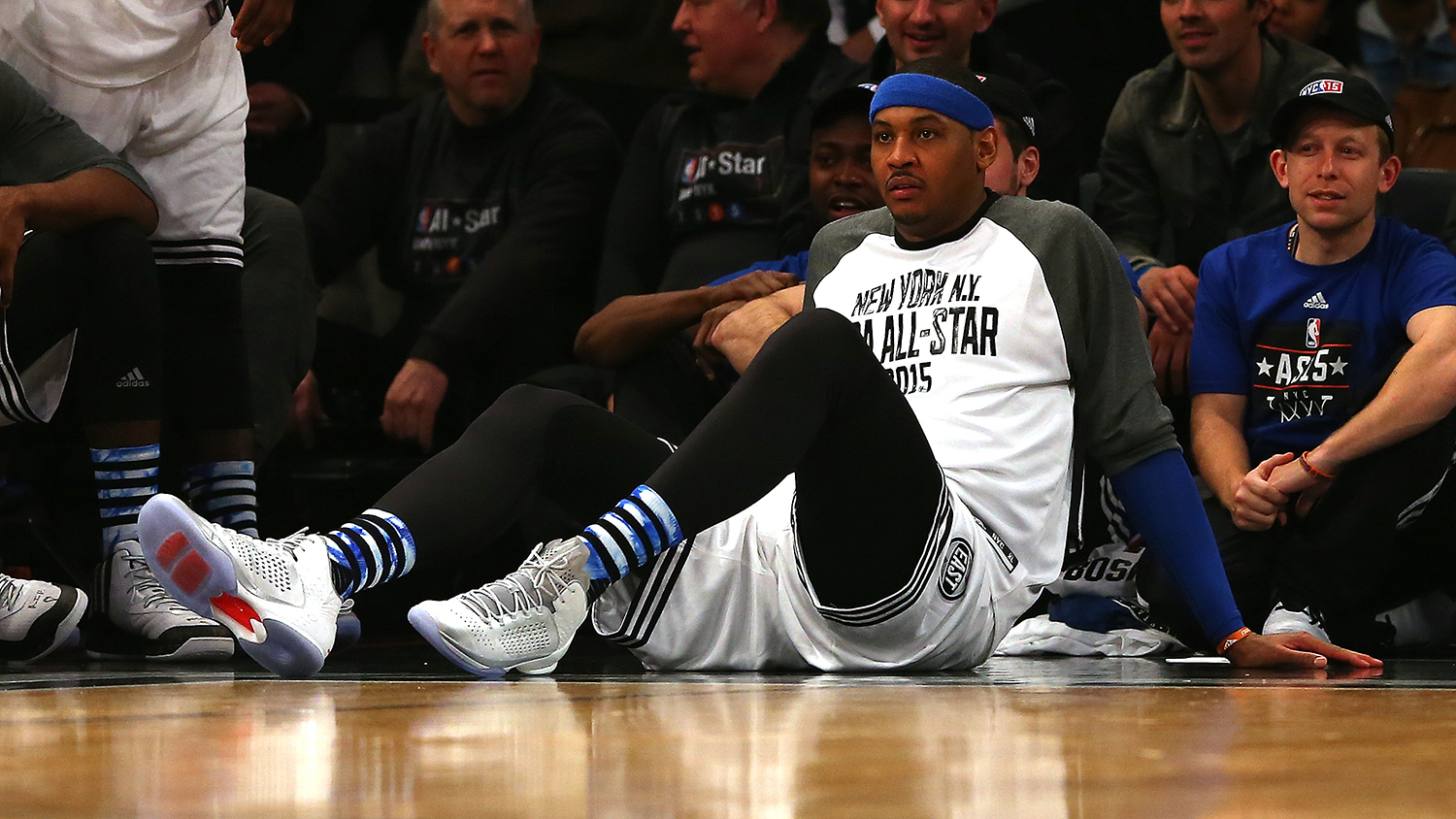 Melo finished the All-Star Game with 14 points on 6-of-20 shooting, including 2-of-13 from 3. He played 30 minutes and 17 seconds, the second most on the team, including — as stipulated by the Garden lease — the final minutes of crunch time, as Kyle Korver looked on from the bench. I’m guessing Melo had knee surgery roughly five minutes after the game ended. 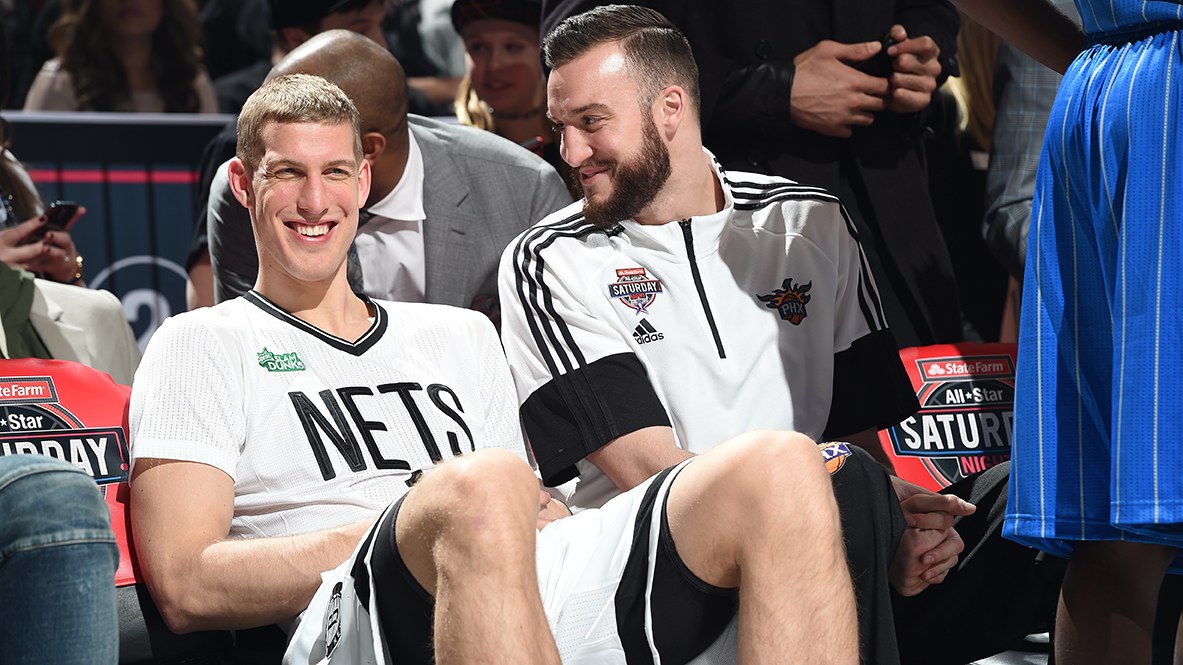 Hart’s fourth consecutive Celebrity Game MVP trophy should come with an asterisk, a footnote, a dismissive hand-wave emoji, a cynical head shake, and an investigation into the corrosive influence of brands. It’s absurd to call a celeb game MVP award disgraceful, but this was a disgrace; like a clown car where only one clown comes out. Grizzlies owner Robert Pera, who played with the try-hard zeal of a kid who yells at you for picking up the sniper rifle during a game of Halo, scored 13 points, and indie rock Marc Gasol/basketball thief Win Butler outplayed Hart. That’s before considering that the defining moment of the game (not counting Jesse Williams grabbing his knee and falling to the court in a handsome heap) belonged to 13-year-old queen-in-the-making Mo’ne Davis, who hit Hart with a cross and a spin move, leaving the comedian in a state of abject confusion. Davis winning the MVP would’ve been one of the best stories in celeb game history. Not to mention that Pera, Butler, and Davis all played for the winning team! Something is rotten in New Amsterdam.

There’s nothing more authentic and organic than not-at-all-a-paid-spokesperson Chris Paul coming onto the court in his Cliff Paul glasses, merkin beard, and argyle sweater to trade antiseptic, focus-group-crafted one-liners with All-Star MC Anthony Anderson. Just a couple of regular dudes!

​It’s enough to make one pine for the bygone days when Cliff Paul just sat in the stands.

Shouts to Miles Plumlee, whose official All-Star Weekend activities amounted to slipping into a Suns warm-up and standing on the court for 45 seconds so that his little brother’s junk could slap against the back of his neck. Congratulations, Miles; payback is a bitch.

The above is a thing that dudes in long-term relationships don’t want to get caught doing on any day of the year. Getting caught doing it on Valentine’s Day, though, ensures that your significant other will never forget when it happened, and thus never let you live it down. Pour one out for Kenny. Don’t worry, man. It happens to the best of us: