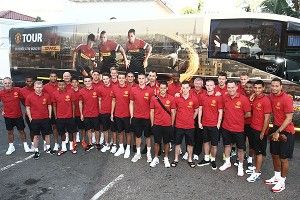 Here’s Manchester United, in front of the Manchester United bus, taken on location at the beginning of the Manchester United summer tour of South Africa. These tours are very lucrative for the clubs who can afford to make them (Portsmouth, for instance, could not really afford their U.S. jaunt a few years ago). They also provide for some high-quality awkward photo opportunities. Man U has jumped out of the gate with the best one of the summer so far. Here’s a couple of awesome things about this photo:

1. Rio Ferdinand making the “cool guy in the group photo” pose.
2. Park Ji-Sung being featured on the side of the tour bus. Park Ji-Sung plays for Queens Park Rangers.
3. The abundance of sport flip-flops. For the love of Bobby Charlton, put on some shoes.
4. Javier Hernandez’s travel murse thing. Five dollars says he has a disposable camera, a granola bar, and a Lonely Planet: South Africa guide.
5. The guy standing in front of Sir Alex Ferguson looks A LOT like Wes from The Challenge.
6. Dimitar Berbatov looking like the cover art for a lost Joy Division album.
7. Paul Scholes looking like he just realized he’s not outside of the news agent’s in Wrexham.