Congrats to Eric Montross, who — along with Christian Laettner, Rick Fox, and Tyler Hansbrough — advances to the Final Four of our Most Hated College Basketball Player bracket. If only CBS would give us the rights, we’d remix a ragey “One Shining Moment.”

As happy as Montross’s “win” is for me — I, too, sort of hate the guy — it’s also a little sad. Because I’m not sure I’m going to hate a college basketball player the same way again.

First, here’s why you picked Montross. He checked a ton of boxes.

• Played in one of the most dominant (read: hate-able) programs in America? Check. Just being at a school like UNC gives you a leg up on the competition. Mark this as a topic for further study.

• Seemed like he’d walked out of a ’50s barbershop? Check. (Memo to Grantland’s younger readers: The Montross flattop didn’t take off in 1993, à la the Fab Five’s shorts.)

• Had no obvious personality? Check. “I see his fan mail,” his girlfriend (now wife) told Sports Illustrated. “People write that they never see him smile.”

• Played hard, but in that way that sort of made you feel bad about your own effort? Check.

Got that? Now, here’s the sad part. Another thing that made Montross hate-worthy is that he played four years of college basketball. The hate had a chance to metastasize. There was a time, kids, when college stars played four fairly regularly. Some asshole would have a decent freshman season (Montross in 1990-’91: 5.8 points per game, 4.2 rebounds). Then the next year, the asshole would be back. And he’d make a jump (Montross in 1991-’92: 11.2 points per game, 7.0 rebounds).

The guy would come back his junior year. And if he was surrounded by decent players, he could make a run. In the ’93 tourney, Montross’s Tar Heels beat the Nick Van Exel–Corie Blount Cincinnati team and the Rex Walters–Adonis Jordan Kansas team. And then they played the Fab Five.

This is important for Montross-hating. Because no matter what we think of the Fab Five now — after we learned that Chris Webber basically had a max deal in college — they were incredibly exciting back in ’93. After Webber’s timeout fiasco, there was a sense — not really fair, but not exactly wrong, either — that North Carolina had accidentally killed a team of destiny.

But Montross didn’t just have the chance to win the NCAA title. He had the chance to lose it, too. And he did just that in 1994, his senior year, when 1-seed UNC was knocked off by Bill Curley and Boston College in the second round. The win was so big it made the cover of Sports Illustrated. (Curley uses the cover on his basketball clinic website.) It was Montross’s comeuppance, the satisfying loss we craved.

This is what staying in college could do for hate. A guy like Montross wasn’t just the sum of his haircut and his school. He had a constellation of associations with schools (KU, Michigan), players (many who soon became hate-worthy themselves), even fans — Montross either made or microwaved your NCAA bracket for four years.

This isn’t a lament for the old times. I fully support players leaping to the NBA as soon as they can. But college basketball as it’s played now may deny us the gift of the next Eric Montross. For once, the old sportswriting cliché is true: They don’t make ’em like that anymore. 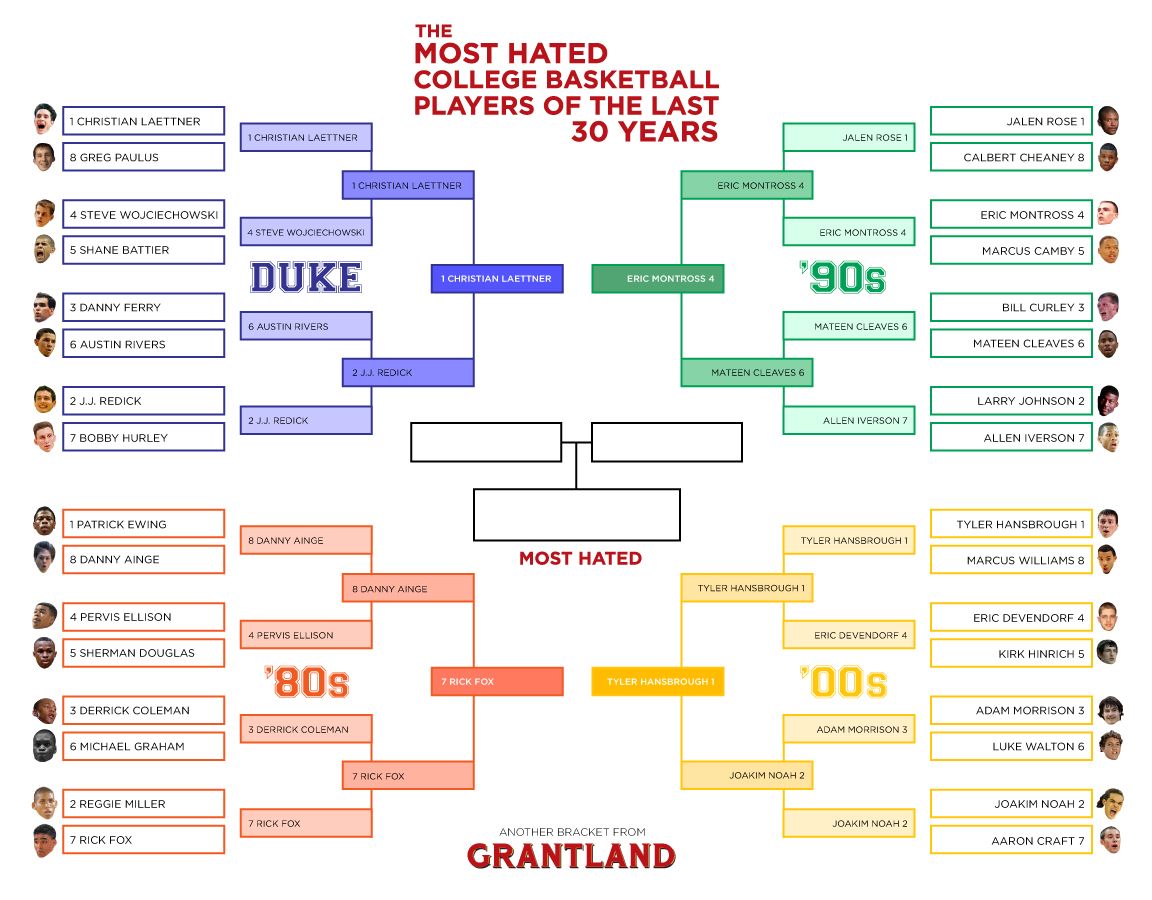