It’s tough being a goon in the modern NBA. A willingness to be ejected for ’bowing an opponent in the windpipe doesn’t naturally coincide with increasingly necessary tasks like protecting the rim, chasing lithe forwards with 3-point range, and spacing the floor with perimeter shooting. The ranks of Reggie Evans and Tyler Hansbrough have begun to dwindle.

Jusuf Nurkic1 may be the futuristic goon we’ve all been yearning for. The Nuggets’ hulking 20-year-old rookie is listed at 6-foot-11 and 280 pounds, moves like a danseuse, and looks like he’ll be a nightly double-double threat in Denver for the next decade. More importantly, despite not speaking much English, he’s already demonstrated a preternatural knack for aggravation.

See, the Bosnian Bear doesn’t care about your All-Star status. He sneers at it. After draining a jumper against Sacramento, he made faces at DeMarcus Cousins while backpedaling. He swatted Blake Griffin, then barked at the Clippers bench. And against the Grizzlies, he rejected Marc Gasol and jawed with the Spanish goliath until being chaperoned back to the sideline by jubilant teammates. In their recent rematch, Nurkic was booed by the Memphis crowd during introductions.

“He has a nasty attitude,” Denver coach Brian Shaw told Grantland. “He’s one of those guys that gets under your skin. But that’s not necessarily a bad thing. I’d rather have a guy out there that’s pissing people off than a guy who’s buddy-buddy with everyone.”

It starts with the face. Nurkic’s mug is wide and expressive, with a crooked smile that oscillates between snarl and mocking hoot. There’s a hint of Eastern European recklessness in his demeanor, of boxy haircuts and bad stonewashed denim, of ice-pick stabbings at techno clubs seen on grainy black-and-white security camera footage. He’s the basketball version of Nelson Muntz, although “ha-ha” is more easily translated than whatever Nurkic is muttering on the court. Just imagine the indignities he’ll spew at Blake after a few months of Rosetta Stone.

Nurkic has only been playing basketball for about six years. The oft-told creation story goes like so: A Bosnian sports agent contacted his family after reading a newspaper story about how his father, a 7-foot, 400-pound policeman in Tuzla, whupped 14 attackers in a fight. Soon after, Yung Nurk was in Slovenia, learning to shoot baby hooks and waiting for those IED genes to explode.

Nurkic made a sizable blip on the international radar last year while playing for KK Cedevita of the Adriatic League. Despite a nimbleness unique for his size, scouting experts compared him to other European bigs like Nikola Pekovic and Zaza Pachulia. Chicago scooped him up with the 16th pick in the 2014 draft and then shuttled him to Denver as part of the Doug McDermott deal. “Last season, he made such a monstrous jump that it was hard not to be aware of him,” said Denver GM Tim Connelly of Nurkic’s rise. He cited physicality, instincts, mobility, and attitude as selling points, plus, “He’s massive, which always has an impact at the rim.”

Per 36 minutes — keeping in mind he only averages 16.5 minutes a night — Nurkic is averaging 14.4 points, 13.2 rebounds, 2.7 blocks, 1.7 steals, and 1.7 assists. When Denver dealt starting center Timofey Mozgov to the Cavaliers in early January for two protected first-rounders, the chance to give Nurkic more burn was an additional sweetener. “It made the decision a bit easier,” Connelly said.

Since becoming a starter, though, Nurkic has struggled with turnovers and scoring efficiently. His field goal percentage is 47.5 percent when he comes off the bench, but beneath 40 percent when he starts. This might serve as a cautionary tale of translating small-sample stats to a grander scale, but it’s worth remembering that he’s only 20. “So much fast,” was how Nurkic described the NBA game to the Colorado Springs Gazette earlier this season. 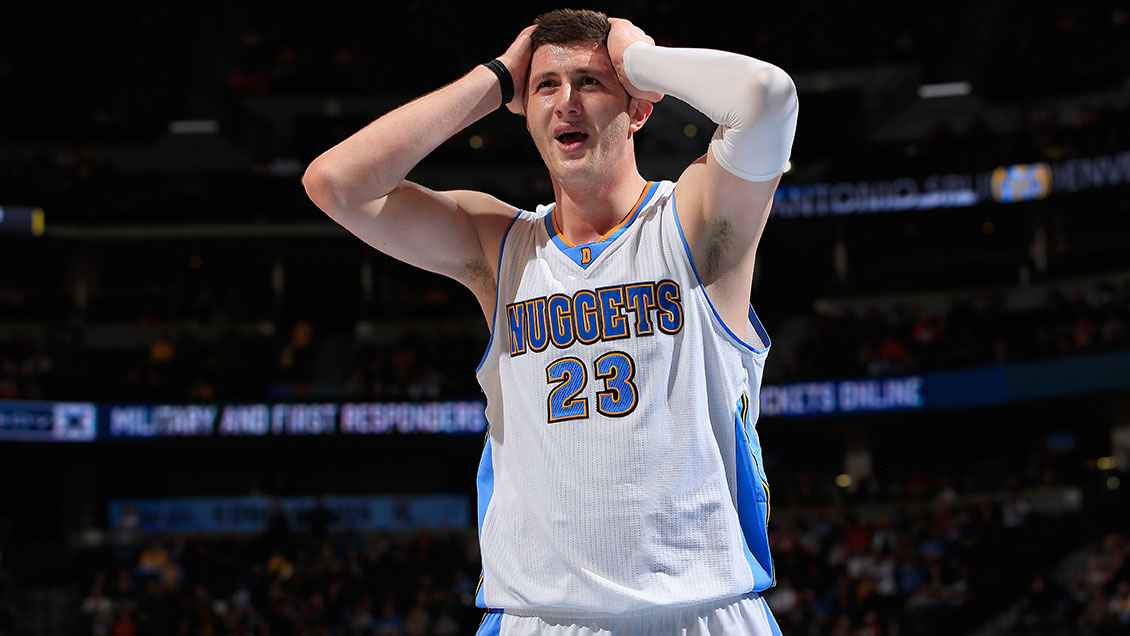 On the defensive side, the Nuggets are 10 points better per 100 possessions with Nurkic anchoring the pivot, according to Basketball-Reference. Opponents are shooting 48.7 percent at the rim against Nurkic, elevating him to the same basket-protecting category as Anthony Davis and Marc Gasol.2 Nurkic is seventh in rebounds per 100 possessions among players with equivalent minutes or more, and he borders the top 10 in blocked shots by the same criteria. Only Philly’s Nerlens Noel and Houston’s Joey Dorsey have a higher rate of plucking up steals among centers.

They’re all a tier below specialists like Roy Hibbert and Serge Ibaka.

“He’s really, really light on his feet for a guy that’s as big as he is,” Shaw said. “He has really quick hands and he anticipates plays well. He surprises guards on pick-and-rolls and jumps out and gets a lot of steals.”

Thanks to the freakish combo pack of rejections and thievery, Nurkic and Noel are two of only three 20-year olds to have ever posted a defensive plus-minus box over 3.0.3 The other is Tyrus Thomas. Widening the net to include 21-year-olds ropes in defensive studs Tim Duncan, Andrei Kirilenko, and Josh Smith.

In brief, the number combines stats and team performance to measure a player’s contribution.

As promising as he’s appeared, Nurkic’s accomplishments are pockmarked with asterisks like “per 100 possessions” because he can’t stay on the floor without using his club-like limbs to pummel foes. He’s a prodigious hacker, racking up fouls at an outlandish rate of nearly seven per 36 minutes. In November, he fouled out of a game in less than 13 minutes. “He has a temptation to want to reach all the time,” Shaw said. “When he’s tired, that’s when he really starts to fall back into bad habits.”

To be a proper NBA player, Nurkic needs to strike the delicate balance between bludgeoning the shit out of enemies and remaining clear of foul trouble. If he can, the goon will live on.